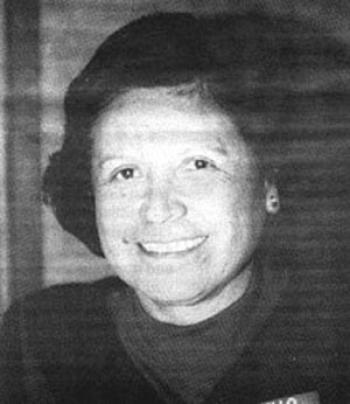 When people speak about Jean Goodwill, word like "trailblazer" and "role model" are bound to come up. Other words you are likely to hear are "dedicated", "courageous" and "healer."

Goodwill was born Jean Cuthand on Little Pine First Nation in Saskatchewan in 1928. Her mother died of Tuberculosis shortly after Goodwill was born, and she was raised by her mother's sister Harriet Cuthand and her husband Jose.

Many of Goodwill's teenaged years were spent in a sanatorium in Prince Albert, north of Saskatoon, where she was sent after she too contracted Tuberculosis.

After recovering from her illness, Goodwill decided to pursue a career in nursing. Her decision was partly influenced by the time she spent in the sanatorium, but was also a result of a childhood spent observing Harriet Cuthand, who was both a midwife and a medicine woman.

Goodwill studied at the Holy Family Hospital in Prince Albert and graduated in 1954—the first Aboriginal person in Saskatchewan and one of the first in the country to become a registered nurse.

Goodwill worked at the Indian Hospital in Fort Qu'Appelle in southern Saskatchewan, then moved to La Ronge in the far north where she was in charge of the nursing station. The nearest doctor was miles away in Prince Albert, and responsibility to provide health care for the community fell to Goodwill and a nurses' aide.

Goodwill delivered dozens of babies during her first year there. She also developed an impressive collection of fishhooks, which she added to every time she had to remove one that had become embedded in a child or an American tourist and once, even a dog.

The frontline of health care provision in La Ronge was stressful and when she left, she worked as a nurse in the King Edward VII Memorial Hospital in Bermuda. While such a move likely would have been seen as extraordinary at that time, Goodwill came from a family where for generations members had routinely travelled throughout Canada and the U.S. and such explorations of the world were common and not to be feared.

When she returned to Canada, she rededicated herself to Aboriginal issues. She moved to Winnipeg, where she was executive director of the friendship centre. And she became involved in the World Council of Indigenous People, broadening her focus and working to improve the health of Indigenous people in Canada and beyond.

Her work as a nurse gave Goodwill a first-hand look at the health conditions in First Nation communities, and many of the problems she saw she blamed on the poverty people were forced to live in. She realized that as a nurse, she could help people deal with the effects of that poverty, but the poverty would still remain. What was needed, she knew, were changes to the way the government addressed the problem. That was how her career in the public service began.

She married Ken Goodwill in 1965 and the following year they moved to Ottawa. The next year, she began working within the federal government.

Goodwill's career in the public service included positions within the Department of Indian Affairs and Northern Development, Secretary of State and the Department of National Health and Welfare. Eventually, she was appointed as a special advisory to then-health minister Monique Begin, charged with helping the minister and First Nations work together to address health problems within Indian communities.

Goodwill worked within the public service for two decades, during which time she greatly improved relations between the federal government and Aboriginal people, and played a role in the development of a number of programs, including the Native Alcohol and Drug Abuse Program.

Her work on behalf of Aboriginal people went beyond just being a job. She was also involved in getting a number of organizations launched, including the Native Women's Association of Canada, and was president of the Canadian Society for Circumpolar Health.

Goodwill dedicated much of her time to increasing the number of Aboriginal people working as health care professionals. She was a founding member of the Aboriginal Nurses Association of Canada, created in 1975 under the name Registered Nurses of Canadian Indian Ancestry. She also helped develop an Indian and Inuit access program to nursing at the University of Saskatchewan and the health sciences program at the Saskatchewan Indian Federated College (SIFC), now the First Nations University of Canada, and acted as department head for the SIFC's Indian health studies program.

Goodwill also found the time to write four books, including a profile of Indian and Inuit nurses of Canada, and a biography of her father, John Tootoosis, a Cree leader from Poundmaker First Nation in Saskatchewan who worked to have First Nations land and treaty rights recognized by the federal government.

Even after she and her husband retired to his home community of Standing Buffalo First Nation in southern Saskatchewan, Goodwill continued her efforts to improve the lives of Aboriginal people, teaching Aboriginal health at SIFC and sitting on the board of the Fort Qu'Appelle Indian Hospital.

The health problems that caused her such difficulty at the beginning of her life resurfaced. The Tuberculosis returned, followed by leukemia. Goodwill died in the early morning of Aug. 25, 1997 at the age of 69.

All of Goodwill's efforts did not go unnoticed. In 1981 the Manitoba Indian Nurses Association created the Jean Goodwill Award to be given to members in recognition of outstanding contributions to the health care of Native people. Goodwill herself was the recipient of the first award.

In 1986, Goodwill received an honorary doctorate of law from Queen's University and in 1991, she was appointed to the Order of Canada in recognition of her work to improve the health of Canada's Aboriginal people.

In 1994, she received a National Aboriginal Achievement Award in the health services category. And in 2000, three years after her death, Goodwill was named recipient of the Ron Draper Health Promotion Award, given out by the Canadian Public Health Association. The award recognizes those who have made a significant contribution to health promotion.

The Aboriginal Nurses Association of Canada and the Baxter Corporation awards two scholarships of $5,000 in Goodwill's name each year. The scholarships, given to Inuit and/or Indian nursing students, ensure that, for generations to come, Goodwill's name will be associated with efforts to encourage Aboriginal youth to take up health-care careers.