Here are the News: World famous writer has Old Crow on the map 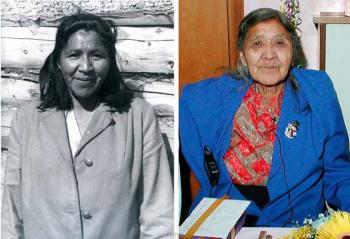 Edith Josie, Here are the News

They were referring to his Yukon community’s ambassador, Edith Josie, who, for 40 years, penned a column in the Whitehorse Star called Here are the News.

In it she wrote about the comings and goings of her people in Old Crow, and her syndicated columns kept readers around the globe hanging onto her every word.

“When her column would come in, we would give it to the newest typist and she would try and correct it,” recalled Whitehorse Star publisher Jackie Pierce.

“And we would give it back to her and say ‘You have to type it just the way it is.’ That’s what made it the column it is. Just the way she spoke.”

When Pierce took over the newspaper in the early ‘70s, Josie’s column was already world famous. Josie started writing it in 1962, following it up with regular installments until 2005. It was also syndicated to Toronto and Edmonton newspapers, eventually gaining a presence on CBC’s Gwitchin radio show.

The down-to-earth style of Josie’s column struck a chord, and her writings were translated into German, Italian, Spanish and Finnish, and collected into the book “Here are the News”, named for the column.

“She wanted to let the outside world know what the community was all about, what people were doing in the community, about our way of life,” her daughter, Jane Montgomery, told CBC News. She also said her mother was used to receiving calls from all over the world about her columns.

“People would come through here–tourists–and they’d be from all over the world. I was always shocked when they said they were here to meet Edith Josie,” he said.

Josie spent her younger years trapping, hunting and fishing. When her father died, and later her mother, Josie looked after her brothers. She never married.

It was because she was single that the local reverend’s wife Sarah Simon, responding to a request by Whitehorse Star publisher Harry Boyle, first approached Josie to work as an Old Crow correspondent for the paper.

Not having a family to look after, Simon thought she might have time to write a regular column. Josie took her up on the offer and became world-renowned. By the time the book containing her columns was published in 1993, she had been profiled in Life magazine and received the Canada Centennial Medal for her contribution to the nation.

Readers loved how she recorded the happenings of Old Crow, from spring hunts to airplane arrivals.

“It is a very small village here at Old Crow, but the news is getting better every week,” she wrote in her April 1963 column.

“It is a very small village here at Old Crow, but the news is getting better every week,” she wrote in her April 1963 column. “I’m sure glad everyone gets my news and know everything what people are doing.

“A few will go up river for cutting wood. Just one or two families will move up river for drying meat and same time cut wood for sale.

“Even now the spring has come cause it is daylight around 11 o’clock p.m. Pretty soon we won’t use light for night time. Everyone glad to see plane every day. Even the same plane come in one day, they all have to go down to see what is going on and what come in on plane.

“Edith loved the wilderness she lived in and she put our little community on the map,” confirmed Kyikavichik.

“Beyond her writing, she was also a precious part of our community. She cared about everything, especially children. They were always visiting her and she’d make dry meat with them, or make bannock. That was her way of educating them in regards to their culture and being respectful.

"Edith was just so full of smiles. She always greeted everyone and asked ‘how are you?’ If we had difficult times in the community, maybe a loss in the family, she would come by your house to pray and ask God to strengthen you. She was definitely a spiritual leader.”

Indeed, Josie acted as a lay reader for the Anglican Church in Old Crow, and preserved Gwitchin culture by teaching the language at the Yukon College Campus in the community.

Kyikavichik recalled Josie’s encouragement at general assemblies and meetings in which the community was trying to resolve land claims.

“She would always get up and remind everyone to work together. She’d say, ‘Don’t fight within yourselves. If you listen to each other and be kind to each other, something good will come out at the end of the day’.”

Josie is survived by two of her three children, and three grandchildren, including Tammy Josie, who said her grandmother gave her a start in learning and telling stories after she pulled her onto the stage at the annual storytelling festival in Whitehorse when she was only 14.

Since that day, she’s followed in her grandmother’s footsteps, sharing cultural teachings and passing on the stories Edith Josie used to tell.