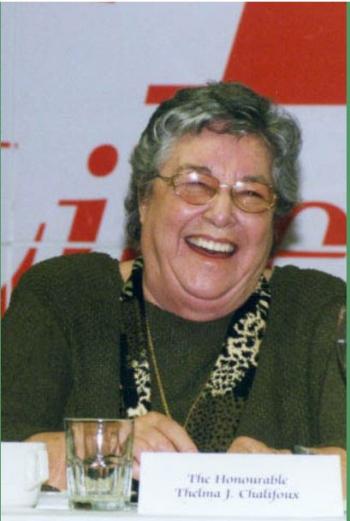 Thelma Chalifoux passed away at the age of 88.

The kind voice with a French accent on the other end of the line left no doubt as to who was calling Thelma Chalifoux.

"Madame Chalifoux, would you like to be a senator?" he asked.

And that was how the long-time Métis activist and tireless worker for her people found out Prime Minister Jean Chretien had chosen her as Canada's next senator, replacing Walter Twinn who died in October 1997.

"I said 'I would be honored,' and he said 'Madame Senator Chalifoux, I appoint you,'" she recalled.

Known for her forceful and assertive style of negotiating and sometimes confrontational manner, Chalifoux said her reaction to the call was wholly uncharacteristic.

"I was just speechless for once in my life," she laughed. "It was just such a wonderful blessing and then when I found out I was the first Métis ever and the first Aboriginal woman appointed to the Senate, well, it was just unbelievable. There have been Aboriginal senators before me. Jim Gladstone, the very first one, was a Blood. Len Marchand is a status Indian from B.C. and Walter Twinn was from the Sawridge Band, but I'm the first Métis and the first (Aboriginal) woman," she explained.

According to a spokesperson in the Prime Minister's press office, Chalifoux was chosen for her outstanding contributions to the advancement of Métis people and as a reflection of her representation of the overall makeup of the Canadian population. She was officially sworn in Dec. 1.

Born in 1929 and raised in Calgary, Chalifoux's family goes back a long way in Alberta's Métis roots. Her father, grandfather and great-grandfather, Paul, Francois and Severe Villeneuve, and grandmother Julia Boucher, were from the early Métis strongholds of St. Albert and Lac Ste. Anne.

Chalifoux was raised among relatives who worked for changes for the Métis and recalled attending meetings in private homes to escape detection from the government.

"In the early days it was illegal for us to meet to organize. If more than three Aboriginals were gathered in a public place it was classed as a meeting, and that was against the law so we used to go to my Uncle Jimmy Kipling's place and have house parties and we'd visit and dance and people would come and discuss Métis issues. Dad was always active in the early Métis movement, so I grew up with it," she said.

Chalifoux remembers meeting Malcolm Norris, one of the founders of what later became the Métis Association of Alberta. After the Second World War, legislation was changed so Aboriginals could meet openly and organize without fear of government retribution.

Military service ran in the family and Chalifoux's father fought in both world wars. Chalifoux joined the reserves and worked in a Salvation Army canteen during the Second World War. Her siblings served in the Canadian army and navy.

She married and subsequently had seven children, but her husband's alcoholism and violence created such havoc that in 1957 she took her children, one still an infant, and left the marriage.

"It wasn't easy but I worked and never went on welfare. I waitressed and raised my kids and took correspondence courses to try to get ahead. Later I was hired as head designer and color co-ordinator for Bapco Paint. In those days there was no machine to make color. People would come in with a sample of the color they wanted and I would develop the formula. I was there two-and-a-half years," she said. Even in the midst of her personal troubles, Chalifoux's heart was still with her people.

"We started the first Métis local in Calgary in 1962 with Clarence Kipling. We had a really good and active local and we opened a little thrift store in downtown Calgary with our own women working there."

Soon after, she moved her family to Sterling, a small, southern Alberta town near Lethbridge, but illness forced her to move to Edmonton to see a specialist. That move brought her in contact with two former staff of the Métis association, Clarence Longmore and Ben Courtoureille.

"I went in the office to change my address so I could continue getting the Métis newsletter they used to publish and I met Clarence and Ben. They were looking for a fieldworker and asked me if I thought I could do the job. I said, 'you bet I can. I'm so broke,' and was hired for the huge sum of $400 a month," she recalled.

The late Stan Daniels was president of the association and he gave the new staff member the responsibility of setting up the welfare and land departments within the organization. She was in her element and it quickly became apparent she had abilities that were invaluable in pressing for improvements for the people.

Immersing herself in the Aboriginal movement, she was elected vice-president in 1970 in the now-defunct Alberta Native Communications Society, an Aboriginal radio and television outlet based in Edmonton.

"That was an exciting time. We developed the Native Communications training program for Grant McEwan College, formed Achimowin Theatre where Tom Jackson and Tantoo Cardinal trained as actors, and developed Project Iron Star to beam television programs into (Alberta's) Wabasca, Assumption and Grouard, the first one of its kind in Canada and accomplished a lot of other things in training and media. I like to think we were pioneers in the movement. There was no other Native organization or anyone else in Canada doing these things. I still have one of the original proposals for that Iron Star project," she said.

Chalifoux travelled extensively throughout the province, organizing the people and confronting politicians on their abysmal record of dealing with Métis people. Never known as a shrinking violet, her strong personality rubbed many bureaucrats the wrong way and she soon caught some unwelcome attention from embarrassed and angry government officials.

"We created such a stir in confrontations with the Alberta government that the RCMP started following me. Eventually, people in government told (then Métis Association of Alberta president) Jim Dcharme to fire me because I was making too many waves. I said, 'so fire me and then watch me organize!'"

Opposition only stoked her fires and she went flat out in working to set up the Slave Lake Friendship Centre and later organized the Slave Lake rodeo with members signed up with the Northern Alberta Indian Rodeo Cowboys Association. After four years of 'really good rodeos,' Chalifoux left the area and when the organization started to fold in her absence, the town took over the project.

She then went in with the Company of Young Canadians and the group organized a detoxification centre and laid the foundations for what would become the Alberta Vocational Centre in Grouard.

The Company of Young Canadians travelled to many communities throughout Alberta and also the Northwest Territories and weren't limited to Aboriginal issues only. The non-Aboriginal people in the north often suffered from Seasonal Affective Disorder, a physiological depression that occurs in the long winter from a lack of sunlight. The group started a program for moms and tots.

With her firm grasp of the issues involving Aboriginal people and her way with words, Chalifoux went on to Peace River, Alta. and, employed with CKYL Radio for four years, was the first Métis woman broadcaster in Canada.

With her children grown, she took on more responsibility. She was named as the first woman senator of the University of Alberta in Edmonton, worked with Métis Association of Alberta President Larry Desmeules in forming Métis Urban Housing in the mid-1980s, chaired the Métis National Council Senate, was elected vice-president of the Aboriginal Women's Business Development Corporation and vice-president of the Provincial Association of Friendship Centres. In recognition of her outstanding volunteer work with individuals and communities, she was presented with the prestigious National Aboriginal Achievement Award in 1994.

She formed the Métis Institute of Canada in St. Albert, her current home, as a way of preserving and sharing Métis history and showing the strides the people have made over the past century.

"I recently read an news article in which the person being interviewed was saying we're so poor and beaten, but we're not and we've never been. We're a proud and independent people. We're not downtrodden," she said.

As Canada's newest senator, Chalifoux will represent Alberta which means commuting back and forth from Ottawa to home. She said she'll be looking to share living quarters in the country's capital in order to stretch her budget.

Looking back over the past three decades, Chalifoux said the Métis have come a long way and issues are approached differently today compared to the sixties and seventies.

"Things have changed from resolving issues through confrontation to a paper way. There was a time for confrontation but these days it's a paper war. That's where you make real and lasting changes."

Never one to be idle for a minute she also owns Secret Garden Originals, a shop specializing in crafts and floral designs and her latest project still in the budding stages is a book on Métis women activists.

"As long as we still have our old people living in Third World conditions in the north, I won't quit," she said.