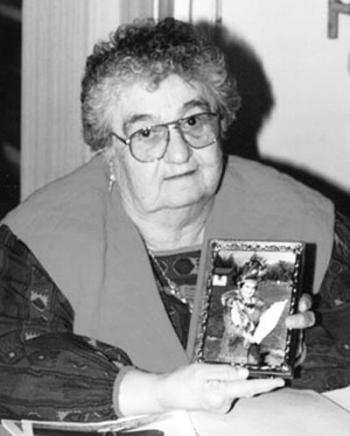 Elsie Knott made history when she became the first woman in Canada to be elected as chief of a First Nation. While that feat earned Knott a place in the history books, she chose to take on a leadership role not to make a name for herself, but to improve the lives of the people in her community.

Knott was born Elsie Marie Taylor in 1922. She grew up on Curve Lake First Nation, located just north of Peterborough in southeastern Ontario. At the age of 15, she married Cecil Knott and the couple had three children.

She was first elected chief in 1954, just three years after amendments to the Indian Act gave Native women the right to vote in band elections and hold positions on band councils. She served until 1960, then was elected to the position again in 1970 and held the post until 1976.

Even before she became chief of Curve Lake, Knott displayed her skills as a leader. When she was younger, her siblings would often come to her for advice, even though she wasn't the eldest in the family. Later in life, many members of the community cast her in the same role, frequently calling her up to ask her opinion or seek her guidance.

During the 16 years in which Knott held the position of chief she worked to improve the quality of life for members of the community, negotiating with government for funds to build new houses, dig new wells and pave the roads on the reserve.

While she was chief, a grocery store, a post office and a daycare centre all opened in the community. She was a staunch advocate for Native people, and wanted the members of Curve Lake to have all the same opportunities available to non-Native communities.

There were many things that made Knott a successful leader. She always had good, creative ideas and always did her homework, making sure that, before suggesting a plan of action, she was prepared to back up her proposal with facts. She wouldn't just tell you what she thought should be done in a particular situation, she'd also give you all the reasons why.

She was a very outgoing woman and liked to make people laugh, character traits that served her well, helping her break the ice in meetings, putting everyone at ease.

With her well thought out plans, gregarious personality and ability to motivate, Knott never seemed to have problems rallying others around to assist with her many projects. Knott was always busy. It's been said of her that the only time she wasn't working on a project was in the time after she'd completed one task and was planning what to take on next. And she didn't believe in leaving any job unfinished once she'd taken it on.

She worked to organize activities like Boy Scouts and Girl Guides for the young people of the community and was instrumental in getting a senior citizens home and a new community centre built on reserve. She also owned and operated the Tee Pee Trading Post and served as Curve Lake's postmistress.

Knott recognized the value of an education. She never went further than Grade 8 herself, but she encouraged her children and grandchildren to get a good education. She provided the same encouragement to all the youth in the community and, for more than 30 years, she personally took on the task of driving them to the off-reserve schools each and every school day.

When she began, she used her own car and, when the number of students needing a ride grew too unwieldy, she bought an old hearse and converted it into a school bus. When even that was insufficient to accommodate everyone, she found the funding needed to buy two school buses for the community.

Preserving and promoting the Ojibway language was also a priority for Knott, who would visit the jails and teach the language to prisoners. She was also instrumental in starting up an Ojibway language program at the Curve Lake First Nation school.

Knott worked to revitalize cultural activities on the First Nation, helping to establish the Curve Lake powwow, which has since become an annual event for the community. She initiated an annual event where a day is set aside for the beautification of the local cemetery.

Whenever there was someone in the community in need of her help, Knott was there. Once, when tragedy struck the reserve and a young boy died, she organized a walk-a-thon to raise money to help the boy's family with burial costs.

Knott was also involved in the local United Church, serving as a Sunday school teacher and later as church superintendent. When the existing church was condemned, Knott co-ordinated efforts to get a new one built. Selling cassette tapes of herself singing gospel songs in English and Ojibway and organizing other fundraising activities, Knott's efforts were rewarded when the new Curve Lake Community Church was completed in 1992.

Knott served as an Elder with the Union of Ontario Indians. She helped found that organization's sports committee, and was involved in starting up events like the Little NHL as a way to get Native communities together.

Her work on behalf of her people took Knott to meetings and events across the country, where she met with other leaders, both Native and non-Native, and dined with prime ministers and even the Queen of England.

The determination that helped Knott be so successful in her work to improve conditions for the people of Curve Lake also served her well in overcoming challenges in her own life, including a battle with breast cancer. By the time she reached her 70s, Knott was forced to slow down her pace because of problems walking, attributed in part to those many years spent driving the community school bus up and down bumpy roads. It bothered her that she couldn't dedicate as much time and effort to helping others as she always had.

Knott's efforts to improve the lives of the people of Curve Lake and Native people in general did not go unnoticed.

In 1992, Knott received an Outstanding Women Award. In 1998, her memory was honored as part of the Anishinabek Nation's Celebration of Women Conference, and in 1999, she was one of the recipients of a Lifetime Achievement Award, given by the Union of Ontario Indians to recognize her service to her community and to her nation.