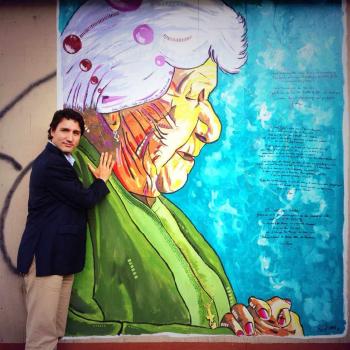 Get a selfie with Elsie: Prime Minister Justin Trudeau with portrait of late Elsie Yanik 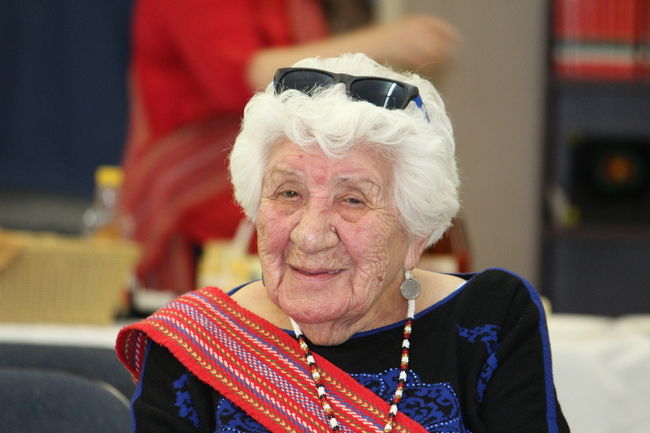 “Dear Creator, help us to return to the centre of our hearts.”

This prayer was spoken by Métis Elder Elsie Yanik often as she blessed Fort McMurray events throughout her long life. Her words even made it into a piece of music recently played at London’s Carnegie Hall by Chronos Quartet, a global classical ensemble.

“A Chronos Quartet composer was in town to record industry and nature sounds, and he noticed there was something missing from the music,” recalled local artist Russell Thomas. “I remembered Elsie’s prayer and suggested he use it as a calming spoken piece in the score, and he did.”

“When you’re as vibrant and loved as Elsie was, remarkable things happen around and to you,” said Thomas, whose own career was boosted by Yanik.

Back in 2014, thinking to cover graffiti that had appeared on a shed behind his art studio one morning, he painted a large portrait in wild colours of the Elder and placed it over the tag.

“I hadn’t painted that large for a long time, but I painted Elsie in a day and brought her to see it the following day.

At first she wasn’t too happy with being the subject of such a large portrait, but then she became comfortable with it.”

Two weeks later, Russell playfully tweeted Liberal leader Justin Trudeau that he should come to Fort McMurray for a “selfie with Elsie”.

“He came with a photographer and had his picture taken with Elsie. That picture went everywhere. So you could say Elsie flipped a switch for my career because I’ve done 470 portraits since then, and the commissions keep coming.”

Yanik’s legacy will also live on in a new school slated to open in 2017 in Fort McMurray, to be named the Elsie Yanik Catholic School.

“It was a privilege to be part of the decision to name our newest school after Elsie,” said Fort McMurray Catholic School Board Chair Paula Galenzoski. “Her lifelong dedication to education, her faith, and her community is a testament to her incredible spirit. To open a school … in her name will be an honour,”

Superintendent George McGuigan added earlier this year that Elsie Yanik was the perfect choice for the name of the newest school under construction in Parsons Creek.

“Elsie exemplifies what we do at Fort McMurray Catholic Schools. She exudes our core values. She values Persons, she values Community, she values Responsibility, and she values Learning. We know she will be watching over her school,” said McGuigan.

The beloved Elder turned 99 last September and was vital until the day she died.

Even though failing eyesight was troubling her, she worried more about friends suffering in the aftermath of the July fire in Fort McMurray. During the summer she was taken to the hospital for high blood pressure, before she finally left in late September to stay with family in B.C.

Daughter Marylan Yanik, 76, said her mother was planning to return to her home town on Dec. 15 for the Métis Elders Christmas party in Fort McMurray on Dec. 15. But after enjoying dinner at a Nanaimo restaurant on the evening of Nov. 26, she fell ill and was taken to the hospital, passing away peacefully at 2:40 a.m. the following morning.

Yanik was born in Fort Fitzgerald, one of 10 children. Her mother died when she was eight years old, and her father, who was a cook for the NorthWest Mounted Police, was unable to care for the younger children. They were sent by barge to the Grey Nuns Convent in Fort Resolution.

“It was very, very hard at times, being taken from home to a place where there was so much discipline,” Yanik said in a news article. “But, you know, discipline is good. Discipline never hurt me.”

At 17, Yanik left the convent and attended a two-year nurses’ aide program in Fort Smith. She wanted to be a nurse, but lacked the education. This shortfall became the subject of many of her speeches urging young people to get an education.

“Education is so important,” Yanik was often heard to say. “We never had that opportunity in the early twenties when I went to school.”

While still a young woman, at a Christmas midnight mass in Fort Fitzgerald, she met Lawrence Yanik and they were married when she completed her training.

They honeymooned on Lawrence’s trap line, and settled in Fort Fitzgerald for a time. A move to Fort Chipewyan with the Alberta Forest Service was soon followed by Lawrence starting Noralta Air Charters.

They built a beautiful home overlooking Lake Athabasca and when, at 82, Yanik gave up her driving license, she walked two miles to town each day.

When the priest left Fort Chipewyan, Yanik – as an ordained Roman Catholic lay minister – performed weddings and conducted funerals. She also served on the Advisory Board to Vic Henning, the Northeastern Commissioner, and volunteered with the Young Offenders program.

After a triple-bypass, Yanik made the move to Fort McMurray, keeping busy with her sewing and crafts. She had an active role with the Métis Association and was involved within the Golden Years Society.

She carried the Olympic torch in 2010, and offered grace in Cree and English at high profile community dinners and gave speeches at numerous functions.

She fondly recalled receiving a blessing from Pope John Paul II. Among the many awards given her are the Governor General’s Commemorative Medal, honorary degrees from the University of Alberta and Keyano College in Fort McMurray, and the Indspire 2015 Lifetime Achievement Award.

Friend Marian McLellan says she was “in awe of Elsie’s spirit, her faith and her tremendous impact on others. She was a faithful friend, who enjoyed each and every moment. I learned much from Elsie. I learned about the spirit of giving, of tolerance, and love of life.”