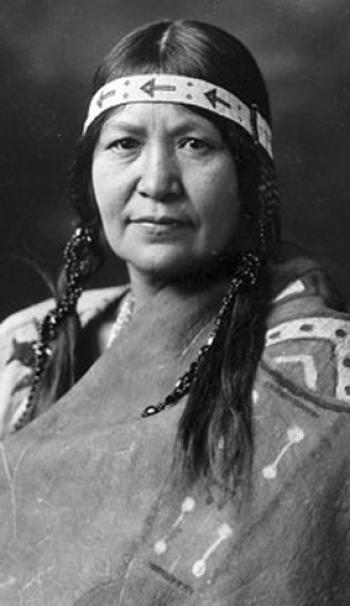 Christine Quintasket was born in 1888 to Salish parents Lucy Stukin from the Colville reservation in north-central Washington State and Joseph Quintasket, Okanogan from British Columbia.
The Colville reservation was Quintasket’s early home. It was a traditional household where her mother encouraged her to learn Native medicinal knowledge. With the family continuing cultural practices at home and also attending the local Catholic church, the young woman grew up in two worlds.
When Quintasket was 14, her mother died and the responsibility fell to her to help raise her younger siblings.

She spent a few years at a mission boarding school and learned to read from paperback novels, but her lack of a formal education didn’t discourage her from pursuing her dream to become a novelist.

She was inspired by an elderly woman who lived with her family for a time and who shared many wonderful traditional stories with the children.
As an adult, Quintasket was plagued by chronic illness and poverty, but she worked as a housekeeper and fruit picker to support herself and eventually was able to purchase a typewriter.

In 1912, she began her first novel. She first began to write under her traditional name, Humishuma, but changed it in the 1920s after seeing a Mourning Dove at a Spokane bird exhibit. At the time she stated that the often-sad content of her writing was better suited to the pen name Mourning Dove.
Quintasket was encouraged by the writings of Aboriginal women who had preceded her, such as Mohawk poet Pauline Johnson and Gertrude Simmons Bonnin, a Sioux writer who created short stories and wrote of traditional tales.

Mourning Dove decided early on she wanted to write fiction. Struggling with written English, she attended a business college in Calgary from 1913 to 1915, then took a position as school teacher on the Inkameep Reserve in British Columbia. There she flourished among her father’s Okanogan people, close to family once again. She made time in the evenings to work on her writing, and became inspired to start a collection of legends.
In 1915, Quintasket met a businessman named Lucullus Virgil McWhorter, who was an activist working to preserve Indian culture. For his help in gaining awareness of irrigation rights, he had been adopted into the Yakima tribe. McWhorter became her literary mentor, editing her works but often changing them in ways he felt would improve their chances of being published.

In the meantime, Quintasket became ever more aware of the need to continue collecting the traditional stories of her people to preserve the oral history for all time. Soon, she put away her fiction and turned her attention to interviewing the Elders of many Aboriginal communities.
The stories she heard from them were ones she had heard all her life, told to her by relatives and by visiting Elders. Quintasket continued to work at various jobs during the daytime, then worked late into the night recording the stories and legends. Heister Dean Guie, a writer for the Yakima city newspaper, helped her along, and McWhorter continued to offer encouragement.
In 1919, Quintasket married Fred Galler, a Wenatchi man, and returned to her mother’s people at the Colville reservation with her husband, although the couple frequently left the reservation to work as migrant fruit labourers, camping in orchards and fields.
In 1933, Quintasket’s efforts to collect and preserve traditional stories were rewarded—her collection of legends was published as Coyote Stories, a work for which she was intensely proud.
Although she had put her western romance fiction away for many years, it was published in 1927. Entitled Cogewea, the Half-Blood, Quintasket drew on her contact with both Aboriginal and non-Aboriginal cultures to write the novel, which chronicles the dilemmas and prejudice encountered in living in the white man’s world.

The story is about the sufferings of three sisters attempting to remain true to their heritage while each going in different directions in a post-European-contact world.
The author informed a newspaper reporter who interviewed her after the release of the novel that she wanted to show readers that Indian people felt as deeply as non-Indians.

She also used the book to relate how often non-Aboriginal men took Aboriginal wives, and then abandoned them, leaving behind families who could not claim the rights that were theirs because of their mixed-blood heritage.
This first novel by an American Indian woman, she explained, was a preliminary attempt to open the eyes of the world to the Native point of view.
Quintasket became much more than a novelist. Her exposure to non-Aboriginal people brought a renewed awareness of the differences between them and her people. She used the fame she had gained as an established author in her efforts to advocate for Aboriginal land rights and became the first woman to be elected to the Salishan tribal government.

In her writing and in her other works, she attempted to represent Aboriginal culture to a dominant non-Aboriginal world, and she challenged the popular accounts of the Native American stereotype that had been perpetuated by ethnographers.

She joined with other Aboriginal women to form social and craft clubs, and worked hard to form the Colville Indian Association. She led the group in its efforts to obtain over-due land payments, address unresolved land claims and expose misuse of reserve funds by non-Aboriginal officials.

The group also worked to have the overly-large staff of officials at the reserve reduced. And she took on a company who was leasing land in the area when it didn’t hire reserve members as employees as it had promised.

As Quintasket became more active in Native American affairs, she also became increasingly ill. She died in 1936 at the age of 48 from what her death certificate lists as exhaustion from manic depressive psychosis.

In 1990, 54 years after her death, the University of Washington Press published her autobiography, Mourning Dove: A Salishan Autobiography, which has been described as a personal memoir as well as a rich documentation of the Salish people and culture.

She had been working on the story of her life over the years, and the unfinished manuscript was found in the attic of her friend, Guie, who died before having read it. Guie’s wife eventually discovered it and worked to have it published, with editor Jay Miller’s help.
The book contains a wonderful description of tribal life, rites, ceremonies and traditions and provides a glimpse into the life of a woman who defied the odds to achieve her dream and who used her success to forward the cause of her people.