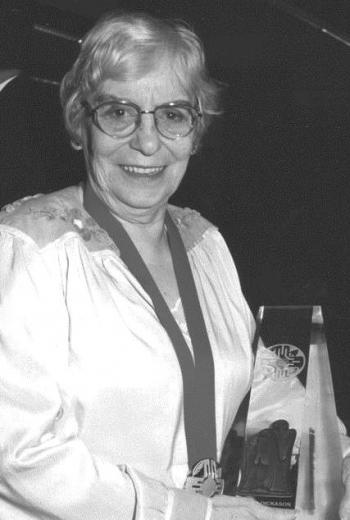 By Bob Beal and Rod Macleod

Olive Dickason lived a quintessentially Canadian life; a Métis who was an advocate for women’s rights, First Nations and Métis rights, and seniors’ rights. She was more than an advocate; she was at the forefront of the struggles. She was an inspired and inspirational teacher and mentor who changed Canadian history.

Olive Patricia Dickason (née Williamson) died on March 12, 2011 at the age of 91. She was born in Winnipeg in 1920, daughter of a Métis mother and English father. During the Depression, the family moved to Manitoba’s Interlake region where Olive and her sister learned to live by fishing, trapping, hunting and gathering.

“I very soon learned that survival depended upon assessing each situation as it arose, which calls for common sense and realism,” Olive once recalled. “You neither give up nor play games.”

She learned something else in the bush: the joy and value of education. One of her few neighbors was a Scottish ‘remittance man,’ a classical scholar who loaned Olive books by the great philosophers, and the London Times.

“Though I only had Grade 10 education, I could discuss the Greek philosophers, what Marx thought on certain subjects. I was just extremely well informed,” she said.

When the Second World War broke out, Olive moved south. Her life changed when she met the legendary priest Athol Murray, “the most spiritual man I have ever known. Ever encountered,” Olive would say. Murray had founded Notre Dame College (and its famous hockey team) at Wilcox, Saskatchewan, and he took Olive under his wing.

“He gave me my life,” she said. “I just wouldn’t have stood a chance otherwise.” She graduated from Notre Dame in 1943 with a degree in philosophy and French.

Olive then began a long career in journalism at the Regina Leader-Post. It was while she was a Leader-Post reporter that she became truly aware of her Métis roots and became interested in First Nations issues.

She moved to the Winnipeg Free Press, then to the Montreal Gazette, before becoming Women’s Editor at the Toronto Globe and Mail. In the process, she had married and divorced, struggling to raise three daughters as a single parent in the hectic and male-dominated world of newspaper journalism.

She left journalism in 1967 to become chief of Information Services at the National Gallery of Canada. There, she began her first book-length work, Indian Arts in Canada.

At the age of 50 in 1970, she shifted gears again, going back to school with the specific intent to get Canada’s history right, beginning at the beginning with the First Nations. As she later wrote: “Canada, it used to be said by non-Indians with more or less conviction, is a country of much geography and little history. The ethnocentricity of that position at first puzzled, and even confused, Amerindians, but it has lately begun to anger them. How could such a thing be said, much less believed, when their people have been living here for thousands of years? As they see it, Canada has fifty-five founding nations rather than just the two that have been officially acknowledged.”

She completed an MA and a PhD in history at the University of Ottawa, studying the early contacts between the French and North American First Nations. Those studies resulted in a ground-breaking book, “The Myth of the Savage”.

Olive Dickason’s second career as an academic historian lasted a shorter time than her newspaper career, but it had a much greater impact. At 56 years old in 1976, she took up an appointment as an assistant professor at the University of Alberta. It was from that base she created her best-known work, “Canada’s First Nations”.

Olive may not have realized when she signed on with the University of Alberta that, like most other Canadian universities at the time, it had a firm policy of compulsory retirement at 65. But she was certainly conscious that her time to publish the kind of history she wanted to write was very limited.

The remarkable thing about this stage of her life was that in the space of about a dozen years she completely changed the academic and, ultimately, the popular perception of the history of Canada’s First Nations.

Until the 1970s, the original inhabitants of North America occupied a well-defined place in Canadian (and American) historiography. They could not be ignored completely, but after playing their parts as traders with Europeans or, more often, as opponents, they disappeared from the record.

Historians wrote about First Nations as if they were an unchanging part of the natural environment. At best they were portrayed as reacting helplessly to the inevitable advance of European civilization.

Olive’s Myth of the Savage explored how early Europeans in North America categorized, and ultimately marginalized First Nations, regardless of how sophisticated their economic and political systems were.

A much more ambitious project was writing a general history of the Aboriginal peoples of Canada. That became Olive’s enormously influential, “Canada’s First Nations: A History of Founding Peoples from Earliest Times”, first published in 1992. That book gave Canada’s First Nations their voice for the first time. They appear in its pages not merely as victims, but as autonomous historical actors struggling, as we all do, to come to terms with a changing world.

When Olive was well into the research and writing of “Canada’s First Nations”, she was approaching her 65th birthday. That meant her professorship at the University of Alberta would have to end. She did not want to go.

The University of Alberta was a congenial place to work. History colleagues such as John Foster were doing complementary work in the emerging area of ethnohistory. The university had a very strong Anthropology department where she formed stimulating friendships.

Characteristically, Olive confronted the problem in the most direct way. She challenged the university’s compulsory retirement policy in the courts. At the lower levels, her effort was successful, but the university won at the Supreme Court of Canada.

The university administration thought they would lose there, too, and had made budget provisions for the extra costs involved in paying professors who wanted to stay on past 65. A number of temporary appointments were found that allowed Olive to stay on until 1992.

She moved back to Ottawa and renewed her relationship with the University of Ottawa. She continued researching and writing, and travelling to promote the history of the Aboriginal peoples. Declining health merely slowed her down. It could not stop her. She faced that challenge as she had faced all challenges, with determination and purpose.

Olive Dickason was made a member of the Order of Canada in 1996. The next year, she received an Aboriginal Lifetime Achievement Award, an honour of which she was particularly proud. She is the subject of an excellent documentary by Villagers Media, “Olive Dickason’s First Nations”, parts of which are on YouTube.

She is memorialized with the University of Calgary’s annual Dr. Olive Dickason Award, “which honors the accomplishments of an Aboriginal student who has overcome adversity and life challenges to succeed.”

Bob Beal is an independent consulting historian who specializes in the history of North American Indian Treaties and lives in St. Paul, Alta. Rod Macleod is Emeritus Professor of History and University Historian at the University of Alberta. They are friends and former colleagues of Olive Dickason.