Annie Paingut Peterloosie: National treasure created a solid future by explaining the past 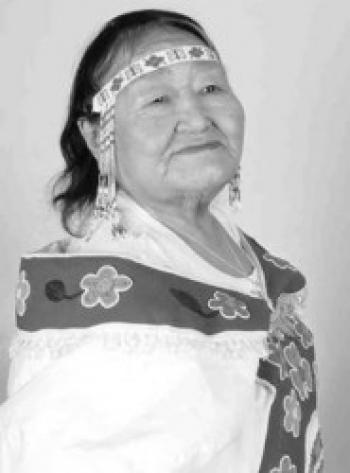 Annie Paingut Peterloosie spent the first 25 years of her life living off the land in what is now Nunavut.

She could tell you about the sheer joy of seeing sunlight on the horizon, even if only for a few moments after four months of constant darkness, and about welcoming the sound of streams running over rocks under the snow when warm winds blew.

She understood that everything on the land had a purpose, especially the ice that surrounded her. She built homes from it, melted it for tea, and carved holes in large chunks of it to weight nets to catch seals swimming near the shore in the springtime; a hunter would never use a rock because it would warm in the sun, melt through the snow and the net could be lost.

Annie made it her life’s mission to preserve and share Inuktitut culture and language through sharing the life she knew as a young girl in Akunniq where she was born. It was a camp between Hall Beach and Iglulik on Baffin Island.

In years past, when the snow geese returned to the land in May, her family would find a dry, rocky beach to put up their tents. While the men concentrated on hunting seals sunning themselves on the ice, harpooning whales and shooting caribou, the women processed the meat and sewed sealskin and animal hides into coats, pants, mukluks and mitts for the coming cold season.

A delicacy was arctic char gently boiled in a kettle over the even flame of a quilliq, the distinctive oil lamp used to both heat and cook in the Arctic.  Annie often demonstrated how seal fat was pounded in the lamp and tufts of Arctic cotton, which grows on the land, was lit to act as a wick.

“The lighting of the quilliq at celebrations honouring the coming of the sun is something Annie was called upon to do as a venerated Elder,” said Roberta Jamieson, head of the National Aboriginal Achievement Foundation (now Indspire). She was delighted to meet the diminutive Elder in late 2010 when Jamieson accompanied Annie and the 13 other National Aboriginal Achievement Award recipients to Ottawa to be presented in the House of Commons. Annie received the Culture, Heritage and Spirituality Award for 2011.

“She is tiny but she’s a giant in terms of her value when it comes to Indigenous knowledge. We have lost a national treasure,” commented Jamieson. “Her joy and warmth touched each person and the strong connection she was able to make with all individuals was extraordinary.”

“I want to help the community so much,” she said in a biographical film on the NAAF Web site.

“This generation is losing the Inuktitut language and culture. I want to make sure Inuktitut is preserved for the people of Pond Inlet and Nunavut, as well.

“I didn’t always listen to what my grandmother said, but since I’ve grown up, I discovered why they were always trying to teach the ways of our people. I’m finally living a good life now and it’s because I understand. It is impossible to create a solid future without first understanding the past.”

Annie also helped her people and the world to understand more about the Inuit and their traditional knowledge through her film and theatre work. She appears in John Houston’s films Kivioq and Diet of Souls, the latter about the spiritual relationship between Inuit and the animals.

Annie’s husband Jayco is also in the film and, in it, he describes a shaman’s perception of how a seal feels at the moment when it rises to a breathing hole, and when its last breath and the hunter’s harpoon merge.

Houston had this to say on a CBC Web site regarding the loss of people like Annie: “Anybody who has the idea that these people are special, they have special things to contribute, catch it now, catch it fast because the example that we learned again this week with the loss of Annie Paingut Peterloosie, they’re not going to wait forever. If you want to do anything special with them, they’re ready.”

Annie appeared on stage, as well, with the Tununiq Arsaniit Theatre Group.

In other areas of her life, the Inuk Elder helped sustain the spiritual and mental health of her community. She worked as an addictions counsellor and regularly advised judges in the Nunavut Court services on matters of traditional healing and community sensitivities when sentencing convicted people.

In outpost camps she acted as a counsellor and healer for individuals who had recently gone through the court system.

“Annie had been battling cancer for some time before I met her,” commented Jamieson. “The recent loss of her husband, Jayco, impacted her, too, but she just kept going.”