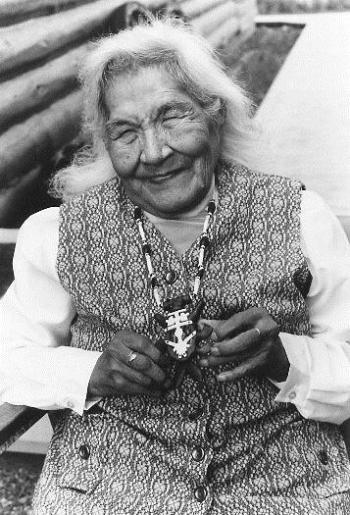 As a young girl, Angela Sidney loved to sit and listen to her parents, aunts and uncles tell stories. She loved to hear them talk about the traditions and culture of her people, and recount the histories of the Tagish and Tlingit people of southern Yukon through the ancient stories that had been passed down from generation to generation.

Angela Sidney devoted much of her life to preserving the stories of her people, the Tagish of the southern Yukon. Her legacy is left in the many books she authored and a storytelling festival held each summer that she inspired.

But Sidney was living in a time of transition and as she grew older, she noticed that fewer and fewer of the people around her were telling the old stories. She worried that the Tagish language, in particular, and the history and culture of the Aboriginal people of the southern Yukon, would be lost.

So Sidney, one of the last fluent speakers of the Tagish language, decided to take on the responsibility to preserve the language and the stories. The result of her effort can be seen, not only in the number of books she authored.

"I have no money to leave for my grandchildren," Sidney once said. "My stories are my wealth."

For centuries, the Tagish people traded with the neighboring Tlingit, and often there was intermarriage. By the middle of the 1800s, the Tagish people began to use the Tlingit language more than their own, and to practice Tlingit customs as well. The Tagish culture and language were further eroded in the 1900s when white prospectors came to the Yukon in their quest for gold.

Sidney was born near Carcross on Jan. 4, 1902. Her mother was Maria John, a woman of Tlingit ancestry, her father Tagish John.

When she was born, she was given three names. She was called Ch'óonehte' Ma in Tagish, Stóow in Tlingit, and Angela in English.

Sidney spoke Tagish only until she was about five years old. After that, she spoke Tlingit, and then English. Yet after 80 years, she could draw from the memories of her early childhood and still speak Tagish fluently.

Sidney and her older brother Johnny, born four years earlier, were the start of a new family for her parents, who had lost four children a few years earlier when a series of epidemics — German measles, dysentery, smallpox and jaundice — swept through the territory. Sidney's mother, too, had taken ill during that time and, although she survived, the experience left her weak.

As the oldest daughter, the responsibility to care for her mother fell to Sidney and she had ample opportunity to ask questions about family history and about the culture and stories of the people. She added to this wealth of knowledge with her own experiences, gained over almost a century of living.

It was perhaps the transitions the community was experiencing that fueled Sidney's desire to record the stories and language of her people. Often while growing up, she would hear stories about the way things had been done in the past, and then was disappointed when her experiences did not match those stories.

For example, she didn't receive a potlatch name because when it was time, there was no Elder in her clan that could give it to her, because the people with that knowledge had passed on.

And her puberty seclusion, a tradition among young Tagish girls, wasn't taken as seriously as it had been in the past, and was actually cut short so that Sidney could return home to help her mother.

Living through this time of transition meant that, in many aspects of her life, Sidney had to live in two worlds. As a young girl caring for a sick mother, she learned traditional healing. And as an adult, she studied medical textbooks. She used both this old and new knowledge to care for the people of Carcross as their unofficial nurse.

She married her husband George Sidney in the custom of her people, but the couple was also married in the Anglican church.

Sidney was only 14 when she married; her husband twice that age. When he referred to her in the traditional Tlingit way — which in English translates into auntie — she was embarrassed, even though she knew he was using the term to show respect. She thought it was too old-fashioned, and was worried that white people would think she'd married her nephew.

More often than not, however, Sidney embraced both worlds and tried to pass on her affection for both to her own children. She didn't want them to be "old-fashioned," but at the same time, she didn't want them to forget the ways of their ancestors. This is the approach Sidney took in her life.

When her son was overseas with the Canadian Army during the Second World War, Sidney bought a radio so she could keep up with the latest news from the front. Later, on his return, she welcomed him home with a gift of an ancient Tlingit song.

Sidney began to focus on the preservation of the history, traditions, language and stories of the southern Yukon in the mid-1970s. She had some of the stories included in two books — My Stories Are My Wealth, published in 1977, and Tagish Tlaagu, published in 1982. She also published a book documenting Tagish and Tlingit place names for locations around the territory's southern lakes.

In 1983, Sidney joined with long-time collaborator Julie Cruikshank to produce Haa Shagoon: Our Family History, a record of Sidney's family tree, dating back to the mid-1800s and covering six generations.

Sidney also had a chance to share her own life story when, in 1990, she collaborated again with Cruikshank, as well as with two other Yukon Elders, Kitty Smith and Annie Ned, for the book Life Lived Like a Story.

Sidney shared traditional tales about how Crow created the world, how the animals were born, and how the seasons came to be. Her stories were filled with animals that could speak and transform into human form.

She told stories to teach children the way they should behave, and to explain why things are done a certain way. And she told stories recounting events that happened in the lives of her own family.

Skookum Jim, her father's cousin, was one of the people credited with starting the gold rush in the Yukon. In one of Sidney's stories, Jim rescues a frog trapped in a ditch, and the frog, in turn, heals Jim when he becomes injured.

The spirit of the frog later comes to Jim in a dream, in the form of a beautiful woman, and tells him he will find his luck down the Yukon River. A year later, Jim goes down the river, and discovers gold.

Sidney and her stories were the inspiration behind the Yukon International Storytelling Festival, which was created in 1988 by fellow storytellers Anne Taylor and Louise Profeit LeBlan, when they learned that Sidney had had to travel to Toronto to share her stories in a festival setting.

The Yukon International Storytelling Festival is held in Whitehorse every summer, and features storytellers from across Canada and around the world.

Sidney became a member of the Order of Canada in 1986, when she made history as the first Native woman from the Yukon to receive the honor.