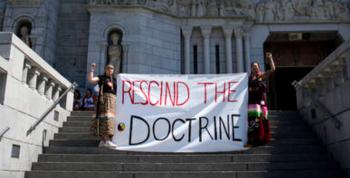 Indigenous women disrupted a service being conducted by Pope Francis during his visit to Quebec in July to express concerns about the harms inflicted on Indigenous people by the Doctrine of Discovery.

“Who’s going to hold anybody accountable if there’s a beautiful covenant on the wall in every church in Canada, but nobody outside of it has ever seen it?”
By Shari Narine
Local Journalism Initiative Reporter
Windspeaker.com

The value of a covenant being developed at the National Centre for Truth and Reconciliation (NCTR) will only be strengthened with the involvement of Indigenous communities.

However, Dr. Cynthia Wesley-Esquimaux, chair of the Governing Circle for NCTR, is concerned—and frustrated—that the churches working on the covenant, which includes refuting the Doctrine of Discovery, are spending too much time on internal discussions and working out the language with the federal justice department.

The covenant is one of the 94 Calls to Action delivered by the Truth and Reconciliation Commission in its final report on the legacy of Indian residential schools.

Call to Action #46 directs the signatories to the Indian Residential Schools Settlement Agreement to “develop and sign a Covenant of Reconciliation that would identify principles for working collaboratively to advance reconciliation in Canadian society.”

Those principles include the “repudiation of concepts used to justify European sovereignty over Indigenous lands and peoples, such as the Doctrine of Discovery and terra nullius, and the reformation of laws, governance structures, and policies within their respective institutions that continue to rely on such concepts” and full adoption and implementation of the United Nations Declaration on the Rights of Indigenous Peoples.

“I think it’s important for the churches to just not sign this covenant, but to actually be able to demonstrate with some clarity that they’ve actually taken it seriously and have been bringing people together to have conversations,” said Wesley-Esquimaux.

She says Elders expressed the necessity of having Indian residential school survivors involved in the process when the first meeting was held in Yorkton, Sask. in February 2020.

Wesley-Esquimaux says she has seen no evidence of follow-through by the churches even at the most recent meeting in April 2022 prior to the Pope’s Canadian visit.

Parties at the table working on the covenant are representatives from Justice Canada; the Assembly of First Nations; the Anglican, Presbyterian and United Churches; and a handful of Catholic entities.

Also, in accordance with Call to Action #46, those who were excluded from the IRSSA, such as the Métis, are invited to be part of the covenant. Wesley-Esquimaux says the Métis have come to the table “tentatively.”

The Catholics, she adds, are “having a difficult time” because of their structure. The IRSSA named 47 entities that comprised the Corporate Catholic defendants.

During Pope Francis’s visit to Canada at the end of July, Canada’s bishops issued a statement saying they were working with the Vatican to address the Doctrine of Discovery.

“Canada’s bishops continue to reject and resist the ideas associated with the Doctrine of Discovery in the strongest possible way,” said a spokesperson for the papal visit.

However, despite calls by Indigenous organizations and a peaceful demonstration during the Pope’s visit, the Holy See did not denounce the Doctrine of Discovery.

Now that the Catholic bishops have taken a firmer stand, Wesley-Esquimaux says there’s a “good possibility” they may join the NCTR’s covenant table.

The invitation would not come from her, she says.

“It would be the people at the table who represent the Catholic entities. I think that’s an internal conversation they have to have and they’re either going to agree to come to the table or not,” said Wesley-Esquimaux.

Still, she says, the process is going too slowly. She concedes that working with a large number of people, especially senior officials who can make the decisions, means it’s difficult to synch schedules.

“But I also think people drag their feet because there’s some reluctance that, when they do this, there will be some backlash. Of course, there will be,” she said.

When it comes to reconciliation as a whole, she adds, there are no “firm guideposts.”

Major events, such as former Prime Minister Stephen Harper’s apology to residential school survivors, the national inquiry into missing and murdered Indigenous women and girls, and the signing of the United Nations declaration, are easy to check off the list, but what happens next? she asks.

“How do we know when we’ve actually created a process of reconciliation that actually speaks to the relationship, the right relations between Canadians at large and Indigenous populations?” she says. “It’s really imperative on us as Canadians, not just Indigenous peoples, to set some very strong next steps. Where do we go from here?”

It is in that vein that she’s urging the churches to move faster with the covenant. She was hoping that it would be completed by the end of 2022, but says she has now been told that 2023 is the more likely date.

However, Wesley-Esquimaux also points out that Indigenous communities are not waiting for others to lead the way and are practising “internal reconciliation.” Languages, cultures, family and ceremony have been repatriated and First Nations are drafting education and child welfare laws.

“Even if this larger reconciliation process is faltering somewhat in some places, the work that’s going on in communities is really critically important,” she said.

It is because of this community strength that Wesley-Esquimaux stresses the need to have First Nations, Métis and Inuit people involved in the creation of the churches’ covenant. It is only with Indigenous involvement that the churches will be made to deliver on their promises.

“I don’t think (the covenant) will have a heck of a lot of meaning if we aren’t a part of it … because who’s going to hold anybody accountable if there’s a beautiful covenant on the wall in every church in Canada, but nobody outside of it has ever seen it?” she said.

The next meeting for covenant discussions is set for September.