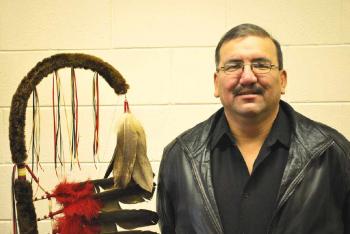 “We have been cast aside …. These organizations continue to accept him as a chief at their table with no repercussions especially when they’re fighting the larger issue of violence against Aboriginal women.” ~ Janet Campbell, spokesperson for the Alexander Women Warriors

Alexander First Nation Chief Kurt Burnstick was found not guilty of sexual assault in court today. The complainant said in October 2015 Burnstick hugged her in his office, then grabbed her and slapped her on the behind. She also said that she felt intimidated by the text messages he had sent to her.

Burnstick's defence said the chief was only caring for his distant cousin's wellbeing, and was acting as a friend. They did nothing but hug in his office while alone.

Judge Clifton Purvis  said he did not believe Burnstick was acting out of compassion and kindness, but there was not enough evidence to prove the incident occurred.

Burnstick broke into tears when the verdict was read and collapsed into the arms of his supporters, Global News, who was in the court room, reported.

(January 10, 2017) Janet Campbell is adamant that Alexander First Nation Chief Kurt Burnstick will not return to the band’s administration office.

“We’re saying, depending on what happens in court, tomorrow we’re going to openly tell people that we will not allow him back in, irregardless of the outcome,” said Campbell. “So if that means we sit in, we protest or whatever, we’re going to do that.”

A three-day trial in the Court of Queen’s Bench in St. Albert has been scheduled for Burnstick, who is charged with sexual assault relating to an alleged incident that occurred in 2015.

Despite that charge – and other charges of two counts of sexual assault and one count of break and enter from allegations from 1985– Burnstick has continued in his position of chief.

“We have been cast aside …. These organizations continue to accept him as a chief at their table with no repercussions especially when they’re fighting the larger issue of violence against Aboriginal women,” said Campbell.

Campbell is hoping for a large turnout tomorrow in front of the St. Albert court house. She expects the majority of the support will come from people who do not live on the Alexander First Nation.

“The situation here has deteriorated a lot. The chief has a lot of power here and he uses it,” she said. “In our community we probably have a small group, but we’ve reached out to the larger community and we have some support coming from some other women’s groups in and around the city and Alberta.”

Campbell is not confident that, should the judge render a guilty verdict by Friday or should Burnstick enter a plea to a lesser charge, that he will resign as chief. She says while the First Nation has a process in place to remove Burnstick, Campbell says she doesn’t see that happening either.

“So if (Burnstick) does show up at the office on Monday, we’re going to have a larger, more vocal protest.”

Following tomorrow morning’s gathering, which the women have dubbed a “Silent Vigil in a Wall of Red” to show support to the accusers, Campbell will be taking her place in the court room to observe the proceedings.  She says it is important to be there as she was one of a core group of women, who started a support group allowing women to talk about “the misogynistic behaviour in our workplace.”

As a result of that support group, a number of women came forward, including one, who is the focus of Burnstick’s trial.

Burnstick did not reply to Windspeaker’s request for an interview.