Wet’suwet’en puts its culture, teachings and laws back into child welfare 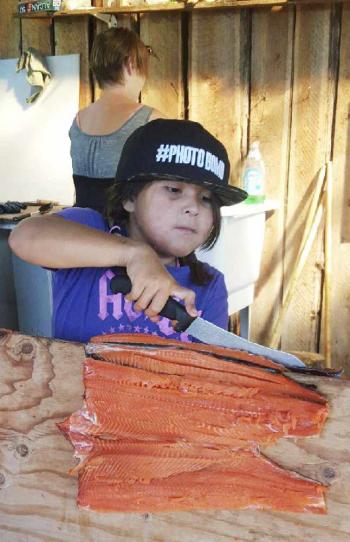 “Taking responsibility for the children and their well-being is something that is a long time outstanding, and we have to start facing that fact.” ~ Dora Wilson

A landmark decision signed Feb. 23 has set a precedent that demonstrates a shift in how British Columbia deals with child welfare.

The province has signed an agreement with the hereditary chiefs of the Wet’suwet’en First Nation, along with the Moricetown Band Administration and the Hagwilget Village council (both of Wet’suwet’en Nation) to hand over jurisdiction of child welfare services, both provincially and federally.

“I’m really happy we got this… That we finally came to this agreement, because as you know leaders far and wide always talk about ‘the children are our future leaders etc.,’ but we don’t really do anything about it,” said Chief of Hagwilget Village, Dora Wilson.

“Taking responsibility for the children and their well-being is something that is a long time outstanding, and we have to start facing that fact,” she said.

The Wet’suwet’en Jurisdiction and Service Planning agreement, as the arrangement has been officially titled, allows the Moricetown Band and the Hagwilget Village—with assistance from the province—to create programs and services which will enhance the health and well-being of children who require Child Welfare involvement, as well as help the families of these children.

The key piece of this is that the programs and services will be based on traditional Wet’suwet’en beliefs and culture, known as the anuk nu’at’en (their laws) and bah’lats (feast protocols), said Wilson.

“A lot of our children who are in care are ones that have never lived on reserve, and that’s why some of it comes as a surprise when you realize how long they’ve lived in care… People don’t even realize where they’ve gone,” she said.

Wilson knows of one 60-year-old woman who was taken by child welfare as a child, and placed in an off-reserve home. The woman moved back only a few months ago, for the first time in her life.

According to Debbie Pierre, the executive director of the Office of the Wet’suwet’en, the difference between the government approach and the Wet’suwet’en approach will be an emphasis on keeping the whole family healthy.

She says traditionally, family members on both the paternal and maternal side have a responsibility for the well-being of every child born, from the time of birth to death. This means that when a child’s home is not safe for them to be in—which would ordinarily result in government apprehension of a child—the programs they create will be a “wrap-around” of services, including supports and services for the parents of the child.

“We’ve had many, many people involved in this process. A number of our leaders, who, sadly, left this world with much uncertainty for their children and families… And we’ve had a tremendous amount of response from across Canada, from either people who have been in care or who are utilizing their own administration of care for their own families,” said Pierre. “This is an advancement for many, many First Nations,” she added.

The executive director of the Moricetown Band Administration, Lucy Gagnon, has worked as part of a program called Anuk Nu’ At’en Ba’glgh’iyi z’ilhdic Program (ANABIP), which started in 2010. The program was a collaborative effort from the Wet’suwet’en hereditary chiefs, the Moricetown Band, and Hagwilget Village, and first laid the groundwork for today’s agreement.

It’s what demonstrated to the provincial government and the Ministry of Child and Family Services that having wellness in the hands of the Wet’suwet’en is the best thing for the people, especially the children.

“Through the ANABIP program, as an example, we had a family that had a lot of turmoil and what ANABIP did was give them the opportunity to go to a family camp. At the family camp they developed new tools and new ways of respecting each other… They’re still together, and the children are not being apprehended every other month,” said Gagnon.

“And they don’t just drop them after the family camp,” she said. “They continue to work with them and find solutions to their problems. So eventually, you’re working your way out of their lives because they’re put back together.”

Hereditary chief of the Wet’suwet’en, Na’moks (John Ridsdale), said his predecessors were part of the negotiations going into this agreement. Their biggest concern, along with his, was that the government bodies all worked in silos, not communicating between each other.

The result was that children were left high and dry, without adequate care, adequate funding, and little hope for reconciliation with their families. And cultural erosion became inevitable for them.

“We’ve often said, we’ve raised our children for thousands of years, and somebody else thought they had the jurisdiction and the authority to remove our children. For us, that has never been our way. We’ve always looked after them, and gave them a place of home,” he said.