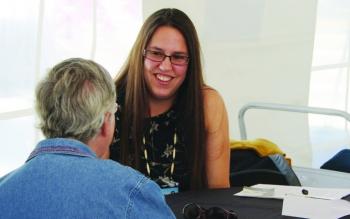 Miranda Jimmy says people need to care about each other the same way they care about family and friends. (Photo: edmontonheritage.ca)

It isn’t often that The Barrhead Leader responds to letters with editorials, but Barry Kerton, editor/reporter, couldn’t let this one go.

“I didn’t want to run the letter as is, nor did I want to be accused of not running the letter, so I wanted to have both sides of the issues kind of covered,” he said.

So on Tuesday, the Leader printed the letter that Kerton had been holding on to because of space issues and accompanied it with an editorial.

He said the decision to run the letter was made by the weekly newspaper’s editorial board. He wouldn’t elaborate on the decision-making process.

Entitled “Reader believes First Nations codependency on government must be broken,” letter writer D. McNaughton from Neerlandia, about 20 minutes north of Barrhead, wrote, in part, “…the sad part is that the First Nations People are not seeing that they are still dependent on the government, and that this dependency has proven to be ineffective and has destroyed many children throughout the generations, and will continue to do so.”

McNaughton goes on to say that both the federal government and First Nations must “bury the hatchet…bury enabling treaties and then talk reasonably….”

Kerton says he found the letter “kind of one-sided.” His editorial is entitled, “The past cannot be forgotten.”

“…To just wipe the slate clean and start fresh. This is too easy. As any health professional will tell you, to cure an illness, one must first understand the cause and quite frankly most Canadians, especially non-Aboriginals have no real understanding of what First Nations peoples have endured or are currently going through as a result. How can we? But still that doesn’t mean we shouldn’t try. The Truth and (Reconciliation) Commission was a good start. Not only did it allow Indigenous and Métis people to start the healing process, but it also gave others a small glimpse into their pain,” writes Kerton.

Kerton would not speculate on whether McNaughton’s letter was representative of the overall attitude in Barrhead.

“We’ll find out if we get more letters,” he said. “It rarely comes up because the nearest band is 60 miles away from here. We have other issues to deal with on a day to day basis. Your typical small town issues.”

Miranda Jimmy, co-founder of Reconciliation in Solidarity Edmonton (RISE), says she often hears people say that Canada’s historical and ongoing treatment of Aboriginal peoples does not impact them personally so they don’t care.

But Jimmy, who is Cree, says all Canadians should be invested in what happens.

“As Canadians we have a responsibility to one another whether we live beside them and they’re our neighbours or not,” she said. “It’s about our relationship with each other in this country…. I should care about them in the same way I care about my friends and family.”

Beyond that, though, Jimmy says taxpayers should want to know what programs and initiatives their tax dollars are being spent on.

Jimmy says that in the short time RISE has been in operation she has seen slow movement towards understanding.

“I think the biggest change I’ve seen is people recognizing they don’t know everything. That’s the first step: people understanding they need to learn,” she said.

Jimmy encourages people to step out of their comfort zones.

“It’s starting with conversations. Generally we have the tendency to talk to people who look like us, run in the same social circles, have similar ideas. And to meet people out of that comfort zone is a challenge. And people need to be willing to do that,” she said. “I think that’s really the first step.”