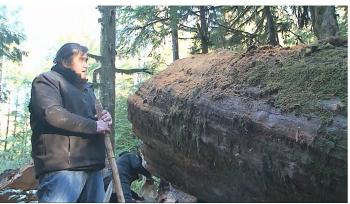 The First Nations Education Foundation has released the first in a series of short videos that will document the carving of a 70-foot Language Revitalization Pole. The pole was commissioned to celebrate the United Nations’ 2019 Year of Indigenous Languages and will be carved by Nuu-chah-nulth master carver Tim Paul of the Hesquiaht First Nation.

This first video documents the recent Pole Naming Ceremony that took place on Jan. 23 in the territory of the Huu-ay-aht First Nations near Port Alberni on Vancouver Island. The project team, led by carver Tim Paul, selected an 800-year old red cedar tree that fell naturally during a windstorm.

In the video, carver Tim Paul talks about the significance of the tree that was selected and what the tree represents in the context of truth and reconciliation.

“It’s holding something of importance,” Paul says, “the language, the key to who we are and how we are able to be the ones that survived to bring things forward. To share and be in amongst our neighbours. To give us goodwill, to give us something like this.”

Carver Tim Paul has named the pole c?ii?i?umqa – his grandmother’s name – which means “holding something of importance” in the language of the Nuu-chah-nulth.

The pole carving process is being documented by filmmaker Dale Devost. The footage will later be used as content for language lessons on the foundation’s platform, developed in partnership with Six Factor, western Canada’s Leading Google Cloud Partner.

The FNEF Language Revitalization Pole project has received the patronage of the Canadian Commission for UNESCO, and the film footage will also be distributed to the 11,000 UNESCO Associated Schools Network (ASPnet) in over 180 countries.

Although the term “totem pole” is typically used in English to describe carved poles such as the Language Revitalization Pole, the correct term in the Nuu-chah-nulth language is c??iin?u? which means “cutting along.”

The Pole Naming Ceremony was led by Edward Johnson, the Health and Wellness Coordinator for the Huu-ay-aht First Nation.

Once the Language Revitalization Pole is completed it will be given to the University of Victoria where it will stand, with the blessing and support of the Esquimalt and Songhees First Nations, in recognition of the University’s leadership in Language revitalization and Indigenous Studies.

Arrangements are being made to transport the log from its forest location to the carving location in Port Alberni.