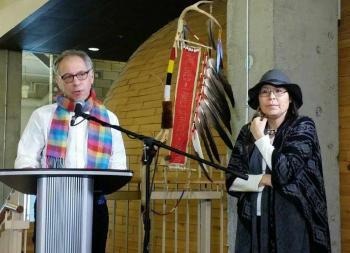 Five carefully thought-out principles for reconciliation between Canada and Sixties Scoop survivors: Be inclusive, honour our history, enable healing, learn from the past, build trust.

“Canada today became a better country, one that protects the cultural identities of all our children,” said Chief Marcia Brown Martel, lead claimant for the Sixties Scoop class action lawsuit. Chief Martel was speaking at a press conference at Toronto’s Native Child and Family Services (NCFS) on Feb. 14.

Sixties Scoop survivors won a major victory after eight years and eight attempts by two different governments to have the case thrown out. Ontario Superior Court Justice Belobaba ruled that the federal government failed in its duty of care to prevent on-reserve Indians in Ontario who had been placed in the care of non-Aboriginal foster and adoptive parents from losing their cultural identity.

“This is a great day in Canada when Canada’s judicial system chooses to say that our children are so valuable and sacred and precious that we will protect them by law,” said Martel. “What a day it is!”

People need to come together to share their wisdom, Chief Martel said, “to ensure that the healing will come for our children, will come for those families who have hurt from the loss of their children.”

Lead counsel for the lawsuit, Jeffery Wilson, said he was motivated to take on the case because his work as a child protection and family lawyer exposed him to what happened to people, “when they are denied a sense of belonging, a connection to their natural core being.”

This case is important, said Wilson because, “it is the first case in the Western World that discusses the obligation of the state to protect the cultural identity of its Indigenous persons.”

It is also important, he said, because it provides Canada the opportunity to start a process of healing. “The healing is not for First Nations. It is healing that privileged males like myself and others have to begin to really examine what has taken place. The racism that underlies what took place in the Sixties Scoop in the name of the best interest of the child affected a lot of very good people,” Wilson said.

He spoke about residential schools and the government’s efforts to have the case thrown out.

Two survivors spoke and said they felt completely overwhelmed by the judge’s decision.

Bill Stewart is Métis and travelled from Victoria, B.C. at Chief Martel’s invitation. He was originally part of the lawsuit because he was scooped out of Ontario in 1965. However, he was not apprehended on-reserve and was later deemed ineligible.

“I think that’s why they wanted me to speak,” he said, “to represent the broader group.” Stewart is in the process of developing a National Day of Recognition for Sixties Scoop survivors.

John Fox from Wikwemikong First Nation spoke about the survivors who have passed on “and those are the ones I wept for earlier when I broke down,” he said. “I celebrate with the spirits who’ve gone on and I acknowledge them.” He extended his gratitude to the team that fought for the survivors.

“We lost a lot of things and we’re at the crucial stage now – the healing.”

Later, Chief Martel said, “I feel like we have stepped into an opportunity that Canada is ready to change how they deal with and how they interact with First Nations, but I have yet to see it. We have a long history of doubting what the Canadian government promises. I have to see the action behind the words, but this is a great step.”

The federal government has stated they will not appeal this decision.