Veterans to benefit if partnership brings a win 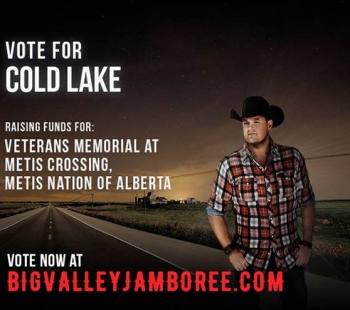 The Métis Nation of Alberta and City of Cold Lake hope their partnership will lead to winning Small Town Saturday Night Jamboree and raise funds for a Métis veterans memorial. (Photo: www.facebook.com/ABMetis/)

Cold Lake needs to qualify for the Top 10 by Feb. 16 when the first round of voting closes to advance to the next round.

A new relationship is taking shape between the Métis Nation of Alberta and the City of Cold Lake.

The two have joined forces in the Small Town Saturday Night Jamboree contest. If voting puts Cold Lake over the top, the city will host a concert April 29 headlined by Juno nominee Gord Bamford.

The proceeds will go to the Métis veterans memorial to be built at Métis Crossing historical site on the banks of the North Saskatchewan River.

MNA President Audrey Poitras approached Cold Lake Mayor Craig Copeland to propose the collaboration. In the past few years, Small Town Saturday Night jamborees have raised as much as $90,000 for the host community.

With the MNA looking for funds to build its veterans monument, Poitras decided it made sense to talk to communities about partnerships.

“Partnerships, networking and volunteering are the backbone of any strong community, and when you put two of them together, anything can be done. We are hoping this partnership with the (city) of Cold Lake will be beneficial to us, as well as them,” said Poitras.

Poitras lives in Cold Lake, and the city seemed the perfect fit for the first ask. Poitras and Copeland had a discussion and city council passed the motion to partner.

Copeland said Cold Lake is home to one of the largest Air Force bases in the country, so helping to fund the veterans memorial was fitting.

“But it’s more the fact that Métis peoples are a big part of life in Northeast Alberta—the deep history—that if our city can help raise some funds for the Métis Crossing we, as a city, are very honoured to be approached by Audrey and the (MNA) council,” said Copeland.

To make Small Town Saturday Night Jamboree happen, though, the online voting has to pick up. With 31 communities across the province competing, Cold Lake sits at the bottom, having earned only one per cent of the vote since polling opened Feb. 1.

Cold Lake needs to qualify for the Top 10 by Feb. 16 when the first round of voting closes to advance to the next round.

If Cold Lake wins, Copeland promises the party will be big.

“The Energy Center can house a big crowd, so if we are selected for Small Town Saturday Night, we will have a great time,” he said.

Along with raising funds for the veterans’ monument, hosting such an event will provide Cold Lake with an economic boost.

“With the downturn in the economy our food, retail and hotel industry is hurting. In partnering with Métis Nation on hosting small town it will help bring in commerce also for our business community,” said Copeland.

Marilyn Lizee, with MNA, is encouraging people to vote and to vote often. Voting can be done on a daily basis. She says a glitch in the email voting system had an impact on numbers.

While Lizee has no price tag to offer for the project, the Métis veterans monument, to be built in two phases, is an ambitious undertaking.

The first phase will be the bottom half of the infinity sign, which is the Métis symbol. Every Métis veteran, past, beginning in 1816 to present, will have his named etched in the marble. That list numbers around 1,200 at this point with the count now at the Second World War, says Lizee.

Before entering the monument, there will be a rendering of a Métis woman and two children with a fiddle at their feet, representing the family waiting for the soldier to return home.

The second stage will be storyboards for each battle, boxes for poppies, and a stone walkway leading up to the monument.

The Métis veterans’ monument has been discussed for “a quite a few years,” says Lizee, and the hope is to start work on it in the next two years.

“I truly believe that it is important to acknowledge, honour and remember our Métis veterans, who fought and gave their lives so that we could all be free. Those sacrifices can never be repaid, however, we can pay tribute to them, and there is no better way than through a monument designed with the Métis culture in mind,” said Poitras.

“It …will become a part of our interpretive site, so Métis families can go and find the names of their loved ones.”

Lizee says if Cold Lake and MNA aren’t successful this time around for their bid to host the upcoming Small Town Saturday Night jamboree, they will try again.