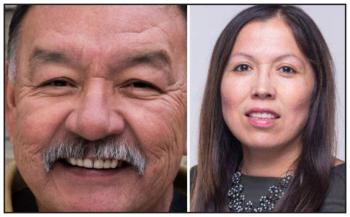 George Arcand, Jr. was installed Jan. 7 as the new grand chief of the Confederacy of Treaty Six First Nations, and Glinis Buffalo is the new executive director for the organization.

“Leaders before us had a vision, had a dream that we needed to create some unity amongst ourselves so that we could fight, so that we could create opportunities, so that we could have tables of discussion to ensure that our treaty is protected.” — George Arcand, Jr., newly installed grand chief of the Confederacy of Treaty Six First Nations
By Shari Narine
Local Journalism Initiative Reporter
Windspeaker.com

Both new and outgoing grand chiefs for the Confederacy of Treaty Six First Nations have stressed the need to return to the organization’s original intent when it was created in 1993—to be a united political advocacy voice.

In a special ceremony held Jan. 7 at the River Cree Resort on Enoch Cree Nation in Alberta, the title of grand chief was passed from Greg Desjarlais, chief of Frog Lake First Nation, to George Arcand, Jr., chief of Alexander First Nation.

Desjarlais took over as Confederacy of Treaty Six grand chief from Vernon Watchmaker late last year as personal reasons forced Watchmaker to step down before the end of his one-year term.

“I’m looking forward to George … keeping the unity and getting the chiefs together,” said Desjarlais as he passed the torch.

There are 16 member nations of the Treaty 6 Confederacy comprising an area around Edmonton and central Alberta.

Arcand is well-versed in all of that having worked with industry and both levels of government. He previously served as CEO of the Fort McKay First Nation and worked as regional director general for the federal government. He also served as a community development officer for Alexander First Nation in the 1980s.

The only way economic opportunities and economic stability will come to Treaty 6 Nations, he said, is for chiefs to work together.

“We need to do that as a confederacy because one voice, who stand united, we can make changes and inroads into making a difference for our communities. We can only do that if we sit at the same table and agree on the same principles as we move forward,” he said.

Arcand also stressed the importance of combatting the coronavirus, pointing out that communities were suffering outbreaks, getting sick, isolation, lockdowns and grief.

He said First Nations communities were being challenged “because our people are not getting vaccinated and we have to change that a little bit. We have to level the playing field and make sure that we can create a balance between our traditional ways of doing things and the modern medicine.”

Desjarlais was unable to attend the transfer ceremony as he had recently tested positive for COVID-19. He is fully vaccinated.

“The treaty people, Indigenous people of Alberta, represent about six per cent of the populace…. We have to survive this pestilence, this pandemic and the medicine chest clause is there and we should be utilizing that to its absolute utmost priority,” said Cameron Alexis, outgoing acting executive director.

In March 2020, when both the federal and provincial governments began implementing measures to deal with the coronavirus pandemic, the four First Nations of Maskwacis declared states of emergency and invoked the medicine chest and famine and pestilence clauses of their treaty.

While Treaty 6 is the only treaty to include these two clauses, the support outlined by these clauses pertain to all First Nations that are signatories to treaties.

Alexis said a strong team of experienced and educated staff were joining veteran staff to help move the organization forward.

Glinis Buffalo from Samson Cree Nation is the new executive director for the organization. She worked previously with Treaty 8 First Nations of Alberta and the provincial government.

“It’s really important that everybody sees themselves in the work that we’re doing,” said Buffalo. “Collaboration is the key. Working together.”

Arcand said he was looking forward to this summer’s celebration of the signing of Treaty 6.

The transfer ceremony Jan. 7 saw the pipes from Treaty 6, Alexander and Frog Lake First Nations brought together in unity.