Unfettered access to Treaty lands off the table, despite billion-dollar IOC investment in resource development 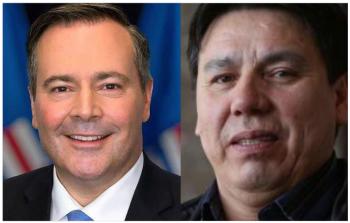 “If it is about us, not without us.” — Grand Chief Arthur Noskey
By Shari Narine
Windspeaker.com Contributor

Treaty 8 Grand Chief Arthur Noskey is putting the Alberta government on notice that while he supports the creation of a new Crown corporation aimed at helping Indigenous communities with finances and expertise to invest in natural resource projects it doesn’t mean unfettered access to Treaty land.

“The government of Alberta is obligated to uphold the honour of the Crown and fulfill Crown duty to consult and accommodate the First Nations before making any decisions or allowing any activities to proceed within Treaty 8 territory,” said Noskey.

He points out that Treaty 8 territory, which spreads across northern Alberta and Saskatchewan and into the Northwest Territories, is home to the largest known reservoir of crude bitumen in the world and the largest of three major oilsand projects.

While many of the Treaty 8 nations support the energy sector, he says, they are also stewards of the lands and waters and believe resource development must be balanced with protection of the resources for their children and the seven next generations.

It will not provide capital for start-ups, however. Technical and financial expertise will also be offered through the IOC and partnership organizations such as the Indian Resource Council.

The IOC, said Premier Jason Kenney, will allow Indigenous peoples to “get in the game and benefit from the resources that lie under the lands that was first inhabited by their ancestors.”

The IOC was one of Kenney’s campaign promises leading up to the provincial election in May.

After forming government, Kenney met with First Nations chiefs and heard “an overwhelming consensus in favour of economic opportunities, including through responsible resource development.”

Throughout the summer, Indigenous Relations Minister Rick Wilson met with more than 200 key stakeholders to discuss moving forward with the IOC.

A ministerial advisory committee was formed to guide the government on the design of the IOC (see our story here on the committee: https://windspeaker.com/news/windspeaker-news/committee-appointments-made-advise-creation-indigenous-opportunities allowing Indigenous communities to more easily participate in major resource projects.

“We expect that this ministerial committee will reach out to the leaders of our First Nations to further define this process and to seek their advice for government,” said Noskey.  “If it is about us, not without us.”

The IOC will be operated by a nine-member board of directors, who will be chosen based on competency and not politics.

However, he did not say if the majority of board members would be Indigenous.

“The Treaty 8 First Nations will be observing the Alberta government closely as it executes this process to ensure that the rules, authority and decision- making powers of this newly created ministerial advisory committee and proposed board will not conflict with the sovereign Treaty 8 First Nations jurisdiction, authority, and governance systems nor will it impact our First Nations inherent Aboriginal and Treaty rights,” said Noskey.

Regulations still have to be developed for the IOC and Noskey makes it clear that “we are not looking for another Indian agent, the kind that restricts and creates barriers on First Nations success.”

The IOC is open to Indigenous groups outside of Alberta, but Kenney stresses that his preference is for projects that “advance Alberta’s economic interest.”

Kenney says he sees the IOC as a possible “game changer” for First Nations in British Columbia who may be wavering in their support for the Trans Mountain Pipeline expansion.

“They’re tired of the old model, which is just benefit agreements…It’s a relatively small stream of income. I think the game changer for a lot of those First Nations who could potentially get into supporting pipelines, would be actually to have an ownership stake,” he said.

Kenney pointed to the three Indigenous-led majority-ownership models for TMX.

Kenney says the IOC offers a “paradigm shift,” with capital awarded based on business plans and not political pressure.

In fact, he says, the IOC could set a precedent for how other provinces work with Indigenous entrepreneurs.

“We are going to do this. We are going to be known from this point forward as a project with the incredible foresight of the Alberta government and Indigenous leaders of this province of building one of the most greenest projects on the planet,” said Helin.

“If we can prove this works well in Alberta, I’ll be all over the feds to replicate this with their much bigger cheque book,” said Kenney, who pointed to Andrew Scheer’s federal election campaign promise to build an energy corridor across the country.

The success of the IOC will be closely monitored over the next three years, says Kenney, with a comprehensive review completed before the end of this term of the government.

The IOC is expected to be operating by spring 2020.

“The sovereign chiefs of Treaty 8 look forward to more discussion with the government of Alberta regarding this initiative,” said Noskey.