UNDRIP Implementation and use: It’s complicated 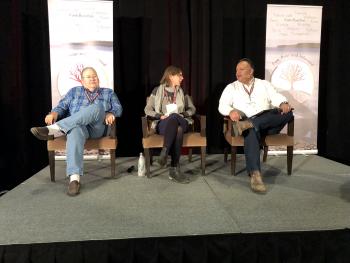 “We don’t have access to a court system to judge Canada at the UN, but we can embarrass Canada.” —Russ Diabo
By Deb Steel

“The declaration is a sham, meaningless,” said a suddenly disillusioned participant of the Free, Prior and Informed Consent Conference held near Collingwood, Ont. last week.

The speaker was responding to Russ Diabo, spokesperson for the Defenders of the Land Network, policy advisor to the Algonquin Nation Secretariat, and on that day, Oct. 26, a panelist for a Q & A session at the conference hosted by the Saugeen Ojibway Nation Environment Office.

Diabo had answered the man’s question concerning a group of Indigenous people in the United States who wanted to take their case to the world court in The Hague, Netherlands—the International Court of Justice. The group wanted to use the United Nations Declaration on the Rights of Indigenous Peoples (UNDRIP) as the basis of their filing. He asked for guidance on the group’s behalf, because 'they can't get past the UN operator.'

Diabo provided a reality check on the limitations of the United Nations' systems, the UN bureaucracy and those of UNDRIP itself.

A lot of grassroots Indigenous people wonder why Indigenous Nations don’t take Canada to the world court for breaches in dealings and wrong-doings against them, said Diabo. But the world court just doesn’t function as an option in that way.

Under the United Nations’ system, Canada could only be brought to the world court by another State party, he said. And there are no nations clamouring to bring Canada up on charges. Indigenous peoples themselves have little standing at the UN, because they are not member States.

Diabo also made an important distinction off the get-go. UNDRIP is a declaration not a covenant (or convention). A covenant of the UN is a legally-binding treaty, which once ratified requires the parties to adjust their domestic laws to comply with international obligations. A declaration is not legally binding. A declaration is meant to be inspirational in its intent. And, in fact, the Canadian government has described UNDRIP as aspirational.

“I wouldn’t call it a sham,” said Diabo, however. Hundreds of millions of Indigenous peoples around the world pushed for that declaration for 20 or 30 years for the UN to adopt it. There was a lot of work put into it, by Indigenous peoples themselves, Diabo explained.

UNDRIP represents the minimum standard on human rights that apply to Indigenous peoples, he said, though it could be better.

Diabo said he agreed that Indigenous peoples should be pushing the United Nations’ system more.

“We don’t have access to a court system to judge Canada at the UN, but we can embarrass Canada.”  Canada is vulnerable to criticism from the human rights bodies of the UN, like the Committee for the Elimination of Racial Discrimination (CERD).

“A lot of us go over there and make representation to them.”

“.. because a lot of the work that’s going on (with the federal government) there hasn’t been enough consultation. That’s what we want,” said Ermineskin Cree Nation Chief Craig Mackinaw.

In its Concluding observations on the twenty-first to twenty-third periodic reports of Canada (Sept. 13, 2017), CERD writes:

Violations of the land rights of indigenous peoples continue in the State party; in particular, environmentally destructive decisions for resource development which affect their lives and territories continue to be undertaken without the free, prior and informed consent of the indigenous peoples, resulting in breaches of treaty obligations and international human rights law.

Conference presenters Paul Joffe, legal counsel to the Grand Council of the Crees, and Jennifer Preston, Indigenous rights coordinator Canadian Friends Service Committee (Quakers), provided participants a glimpse into the laws that talk to the rights of Indigenous peoples, on such important topics as free, prior and informed consent, which is found in UNDRIP Article 19

States shall consult and cooperate in good faith with the indigenous peoples concerned through their own representative institutions in order to obtain their free, prior and informed consent before adopting and implementing legislative or administrative measures that may affect them.

as well as consultation, control, cultural rights and sustainable development.

Joffe specializes in human rights concerning Indigenous peoples, including processes related to UNDRIP and the other declaration that is not as well known but as important, the American Declaration on the Rights of Indigenous Peoples by the Organization of American States.

Preston is with the justice arm of Quakers. She participated in working groups that developed UNDRIP and the lobbying efforts for its adoption.

The concepts “of being free, being fully informed, having the right to say yes or no and having control over their own lands and resources as nations” are not new in international law, Joffe and Preston shared, and are derived from that right of self-determination.

Diabo views UNDRIP’s Article 3 as the most important of all the UNDRIP articles, because it states Indigenous peoples have the right to self-determination.

Indigenous peoples have the right of self-determination. By virtue of that right they freely determine their political status and freely pursue their economic, social and cultural development.

“Without that, the rest of the articles don’t really mean much,” Diabo said.

The next question from a conference participant was on Article 46 of UNDRIP, which seems to contradict all of the articles before it, she said.

“It’s really giving a lot of power to the state,” she said. “How can we use this document to empower our people, but then there’s that clause at the end.”

Diabo said it was a section that was put in at the last minute. Some Indigenous nations agreed to it, because they wanted the declaration put before the general assembly, and to quell the fear of some countries that were concerned that their States would be broken up into tribal territories.

“The late Arthur Manuel (author of Unsettling Canada, A National Wake Up Call) and I used to talk about that a lot, and we said well, we still think that with that clause in the declaration that we still say that Canada has to restructure itself federally and provincially.” Canada says the Constitutional Framework will remain in place; that means the orders of federal and provincial governments and their jurisdictions, Diabo said.

Diabo said Section 35 needs to be interpreted, even if Canada needs to “bust open the Constitution again.” The courts have taken over interpreting Section 35 and putting legal tests in place that cost millions of dollars to meet. The burden of proof now is on Indigenous nations to prove their rights. It is an unfair process, because, for most, it is unaffordable to seek justice under those strong legal tests.

Diabo said Canada is acting like Article 46 is the be all and end all of the declaration though and that Canada can unilaterally decide things. That must be challenged, he told the gathering.

“The declaration has to be read in total. You can’t just read Article 46 by itself. You have to read the whole thing and it says ‘we have the right to self-determination’.” There are land rights that must be restored, and if they are not restored there must be restitution, and there should be a fair process to adjudicate that.

“We need fundamental change to the Canadian system.”

Diabo said First Nations people must read and know the declaration—memorize it—and “get our acts together on the ground in our communities” to build things up to have impact at the international level.

Diabo is not the only person calling for fundamental change.

On Oct. 30, the International Law Research Program of the Centre for International Governance Innovation (CIGI), working with the Wiyasiwewin Mikiwahp Native Law Centre of the University of Saskatchewan College of Law, announced the publication of a new special report. It is a collection of short essays which discus how international law, domestic constitutional law and Indigenous peoples’ own laws can work together to bring about full implementation of UNDRIP in Canada.

It's called UNDRIP Implementation: More Reflections on the Braiding of International, Domestic and Indigenous Laws

In the preface, the report reads

Since the Government of Canada’s “embrace” of UNDRIP at the United Nations Permanent Forum of Indigenous Peoples in May 2016, much has happened to set the stage for an ambitious implementation agenda. Yet actual progress remains slow and largely illusory…. many of the contributors to this special report explain that more is needed to effect actual change on the ground for First Nations, Inuit and Métis peoples in Canada…

UNDRIP represents the concerted efforts of Indigenous leaders from around the world to stem the destructive and disempowering effects of colonialism and to create conditions for Indigenous peoples to reclaim their social, cultural, linguistic, spiritual, political, economic, environmental and legal autonomy. As such, its embrace by the Government of Canada should create opportunities to make substantial progress in recognizing Indigenous peoples’ rights in Canada. Yet many of the contributors to this report — much like the authors of the Yellowhead Institute’s report on Canada’s Indigenous Rights Framework — express considerable concern that Canada’s vision of Indigenous jurisdiction over lands and resources is a very narrow one, and perhaps little more than a modified version of the status quo.

Read our story on the Yellowhead Institute's report here: www.windspeaker.com/news/windspeaker-news/start-paying-attention-to-indigenous-rights-legislation-first-nations-warned/

Implementation of the declaration into both the international and domestic legal landscape, states the preface, will require legal change to recognize and accommodate different legal orders.

Also, still on the horizon is the fate of the private members Bill C-262, an Act to ensure that the laws of Canada are in harmony with UNDRIP, sponsored by MP Romeo Saganash (Abitibi—Baie-James—Nunavik—Eeyou). It is now in the Senate.

Second reading of UNDRIP, moved by Senator Murray Sinclair, former chair of the Truth and Reconciliation Commission, was scheduled for Oct. 23, but Sinclair told the senators. “I’m not ready to speak on this at this time” and debate was adjourned. Bill C-262 is expecting to come back before the members in the very near future.

"I think this legislation has the potential to be so critically important for implementing Indigenous peoples’ human rights," said Preston.