Under Development: Tabletop game challenges anti-Indigenous stereotypes and other discrimination 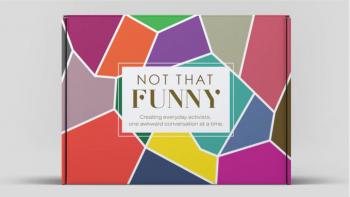 Our “Under Development” series explores the projects that are at the beginning of their journeys. They have some support, but the creatives driving them still have some miles to go. We join them on their paths.
By Adam Laskaris
Windspeaker.com Contributor

A new card game created by a pair of Edmonton-based activists provides a creative way to start anti-discrimination conversations.

Titled “Not That Funny”, the game is described on the pre-order website as having been designed to “uncover damaging truths behind everyday jokes directed at marginalized groups.”

“Not That Funny’ is the brainchild of co-creators Chelsea Gouchey, a Cree activist, and Jesse Lipscombe, a Black actor and activist who is the founder of the #MakeItAwkward campaign. #MakeItAwkward was founded in fall 2016 after video of a racial slur directed at Lipscombe filmed while he was producing a public service announcement gained significant media attention.

Gouchey, who serves as the communications director for #MakeItAwkward, said she had the idea a few months ago for a game to use as a teaching tool, and the pair went forward from there to figure out exactly what the final product would look like.

To date, the pair’s Kickstarter fundraising campaign has raised nearly $9,000 of the $25,000 goal to produce the game. They hope to reach their target by the beginning of June. Distribution of the card game is expected in September 2021.

The gameplay itself is similar to other modern card games like Cards Against Humanity. Participants are given one set of cards and they have to match it up with other prompts, with points being awarded each round for whichever response to what’s on the card that is deemed best.

Each card then offers an explanation that unpacks the meaning behind what the card contains, and opportunities are presented throughout the game to have further chats about why the meaning behind some statements may be harmful, like “All Lives Matter, you know?” and “I don’t see colour, it’s all love with me.”

“The goal of the game is to become better allies through respectful play and come away without ruining friendships,” the game’s instructions read.

“A lot of these micro-aggressions that have made their way onto cards in our game are examples of things that we’ve seen in real life or things that have happened to my friends in real life,” Gouchey said.  “People might have some myths, some stereotypes of Indigenous people that are incorrect, of course.”

“Not That Funny” was originally meant to focus solely on anti-racism efforts, but eventually the pair decided it was best to broaden the horizons to anti-discrimination generally. The partners say they’re frequently approached by schools and businesses looking for a tool to start or continue difficult conversations around marginalized groups that might be outside of the sphere of a presentation or a video.

The creators say the game is something that can be used in educational settings across Canada and the United States, with goals to eventually add expansion packs to keep up with current events and eventually have more of a global reach.

Lipscombe said that teachers can use it as a tool that they bring into the classroom themselves, as governments across many jurisdictions have pushed back against adapting lesson plans on topics such as colonialism, discrimination and slavery throughout history.

“I feel this game has an option to fill in the holes, to ask some real meaningful questions about what was often missed out in the curriculum. There’s so much missing or things that are just glazed over,” Lipscombe said.

The game is suitable for players 13 years of age and older, but it’s up to guardians if younger players are interested in playing as well.

While she’s wary of the game being misused as a tool to cause further harm, Gouchey emphasized that it’s important for players to recognize it’s meant as a learning exercise that can be played within a safe space.

“Our intention is that we see the greater good in launching the product,” Gouchey said.

“It’s a game that you can take a lot out of after just one play,” Lipscombe added. “It’s such a beautiful tool to tell people about, whether it’s after a speech or whether it’s just at regular hangouts when those (comments) can happen again.”

“We’ve put a lot of blood and sweat and tears into this, and I’m pretty excited what the other side of it looks like,” Lipscombe said.

More information on game rules, frequently asked questions, and how to order a copy through Kickstarter can be found at NotThatFunny.Store