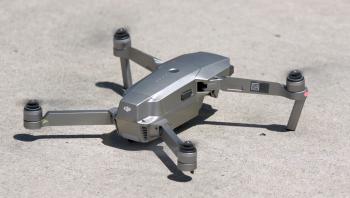 “We’re hopeful (the community will) recognize the benefits of the safety to the officers and to the community and support us in moving this along. If they have concerns or recommendations, we’ll certainly note those.” — Sgt. Quinn Jacques
By Shari Narine
Windspeaker.com Contributor

Drones will be one more resource used by the Tosguna Tsuut'ina Nation Police Service starting later this year.

“This is a growing area in law enforcement,” said Sgt. Quinn Jacques with the rural southern Alberta reserve police force.

The hope had been to deploy the Remotely Piloted Air Systems (RPAS) by June, said Jacques, but the COVID-19 crisis has delayed that plan as officers have yet to be trained to pilot the drones. Policy will also need to be developed on how to manage the video and audio collected by the unmanned aircraft.

The RPAS will provide extra safety for officers and the community, said Jacques.

He has been with Tosguna since 2016. Prior to that he served with the Calgary Police Service for more than 25 years. There, he either investigated or managed gang, drug or organized crime offenses.

“If there’s an allegation that there may be a firearm present in the home, we can actually deploy that device from a greater distance to satisfy ourselves that our officers are going to be safe, and ultimately the public’s going to be safe by mitigating risk from a farther standoff,” he said.

The RPAS won’t be able to look inside the home, but it will be able to indicate whether there is someone in the area or near the residence.

The RPAS can also be employed for search and rescue, which will allow for greater distance to be covered in a shorter period of time. They are also a more cost-effective and timely approach than using helicopters.

“In theory we could do crime scene reconstruction (with RPAS), but we need some additional training over the piloting of the device to get there,” said Jacques.

Tosguna will be deploying Axon Air unmanned aircraft. The members presently use Axon body cameras. The digital information obtained through the body cameras is managed by Axon Evidence software, which will also manage the digital data collected by the drones. Tosguna will be the first police force to deploy Axon Air.

“It’s difficult to manage a large amount of video evidence so (Axon’s) system is quite easy to navigate. We can set retention periods, we can redact … faces (that) don’t need to be shown, we can redact those images and clear them out of the program,” said Jacques.

With the addition of body cameras and drones, privacy has been a growing concern for the wider public where any such equipment is used by a police force.

While Tosguna has yet to develop its policy for digital data collection from the drones, Jacques anticipates it will be similar to the policy they now employ for the body cameras.

“We’re very mindful of a person’s privacy, especially if they’re not involved in a situation. We have varying degrees of retention. So in other words, if it’s a minor or trivial event, or if it’s a non-law enforcement event, like someone is lost, we probably won’t retain that evidence for very long. But if it’s a more serious offence, the scale kind of goes the other way. We’ll retain it longer,” said Jacques.

He said most police forces have a similar policy when it comes to retaining digital information.

Basic and advanced training for piloting the drones will be provided for the officers by private vendors. They will become licensed advanced RPAS pilots under guidelines set by Transport Canada.

Civilians can also be trained to pilot RPAS and may be contracted by a police force.

“If it’s during a criminal investigation, it would be maybe harder to get a civilian there. So practically speaking, our officers are typically there. So in terms of timing it’s easier if they just deploy the device from the trunk of the police car,” said Jacques.

A planned public information session for mid-March to discuss the use of drones with the Tsuut’ina Nation community was cancelled due to COVID-19 restriction measures.

Jacques admits there are numerous concerns about using drones, especially when it comes to privacy issues, and he hopes that a later meeting can help put some of those fears to rest.

Tosguna will start with two drones and then reassess the need for more.

“We’re really in the infancy of this program and I think we’ll see it develop over the next year,” said Jacques.