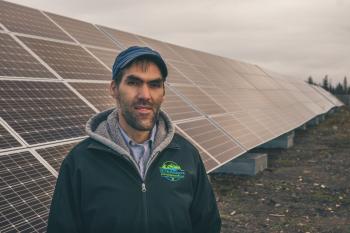 “...a huge economic win for our Nation.”

The grand opening of the Tŝilhqot’in Solar Farm, located 80 km west of Williams Lake, B.C., was celebrated on Friday, Oct. 18.

The 1.25-MW solar farm is the largest of its kind in British Columbia and is 100 per cent developed, built, owned and operated by the Tŝilhqot’in Nation, reads a statement.

It was five years ago when the opportunity to initiate the solar farm presented itself, and there were challenges along the way, including financing, authorization, training and harsh weather conditions.

But the Tŝilhqot’in Nation persisted and now the dream has become a reality.

The Tŝilhqot’in Solar Farm consists of 3,456 solar modules that will convert the sun’s rays into electricity, which will then be sent into the BC Hydro grid and generate economic profit for the Nation.

“I am happy to see that the Solar Farm is ready to offer electricity to the region and provide revenue for the Tŝilhqot'in Nation,” said Nits’ilʔin (Chief) Russell Myers Ross, Vice-Chair, Tŝilhqot’in National Government.

The solar farm stands on two hectares of the Riverwest Sawmill brownfield awaiting the final connection to the power line that runs along Highway 20.  Full operation will begin shortly with the solar farm generating about 1,500 megawatt hours of electricity per year during its 25-year expected lifetime.

“Energy and electricity has been lacking out in the territory for a long time,” said Nits’ilʔin (Chief) Joe Alphonse, Tribal Chair, Tŝilhqot’in National Government, “despite one of the longest stretches of hydro in Canada.”

He said the solar farm is “a huge economic win for our Nation.” Alphonse thanked Chief Russ for providing leadership on the project and his commitment to see it through.”