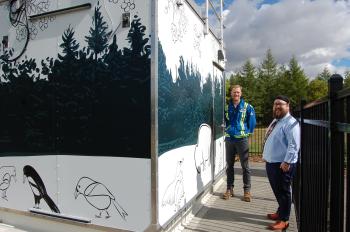 “Buffalo do not cross the river here at this place like they have…The magpies are here waiting for the buffalo to return. I feel there’s definitely a connection there with the magpies remembering and maintaining their presence here, waiting for the buffalo.” —artist Matthew James Weigel
By Shari Narine
Local Journalism Initiative Reporter
Windspeaker.com

The buffalo have joined the magpies again in Edmonton's river valley through the newly unveiled artwork of Matthew James Weigel.

Stark white panels wrap around all four sides of EPCOR’s ambient air quality monitoring station located in Gold Bar Park near the wastewater treatment plant. The buffalo and magpies are detailed in crisp black lines as are the flowers that dangle overhead. The only colour in the panels comes from the deep shades of green in the trees.

Those trees, points out Dënësųłinë́ and Métis artist Weigel, line up with the trees that provide the natural landscape that actually surrounds the monitoring station in the park and “situates the animals on the land.”

“I think it’s really important that art, especially my practise, is one that situates the art in the land,” said Weigel, who was born and raised in Edmonton.

Weigel’s “The Magpie and the Buffalo Treaty” was one of six proposals received by EPCOR for its monitoring station art installation.

Craig Bonneville, director of EPCOR’s Edmonton wastewater treatment plant, says it was important for the utilities company to invite Indigenous artists to “tell their story of the land” through their art.

“I think we recognize that this plant and the water treatment plant are in the river valley and there’s obviously a deep connection with Indigenous communities through this land,” he said.

A selection committee that included Bonneville, a community member and Elders was “really struck” by the story Weigel was telling in his panels.

“The Magpie and the Buffalo Treaty” depicts the symbiotic relationship between the two creatures. As the buffalo wandered the plains, the magpies kept them company. The buffalo kicked up the pests in the soil for the magpies to eat, while the magpies cried out to warn the buffalo of danger.

That waiting is depicted in one of the panels where the magpies stand alone.

But it’s not all about loss, said Weigel, “it’s remembering what has been and what can be.”

“This is part of our reconciliation journey and we’re looking for opportunities to celebrate those ties. We recognized this would be a great opportunity to do that,” said Bonneville.

Weigel says he thinks it’s “incredibly important” that EPCOR take these actions, but he admits that putting in his proposal for an art installation at Gold Bar Park wasn’t an easy decision.

EPCOR “is at the heart…of a long history of resource extraction” and its work at the Rossdale power plant disturbed traditional burial grounds where Weigel had ancestors resting. And while a reburial ceremony was undertaken, Weigel says EPCOR’s presence there points to “the fragility of the relationship” that exists between the utilities company and Indigenous peoples.

“This is a project I thought long and hard about, what it’s meant to be a person affiliated with this place, artwork in this place. Definitely it’s something I continue to think about and I think that the alternative for EPCOR is to do less. Doing something…I’m open to that conversation,” said Weigel.

Weigel has been a professional artist for the past three years. He is also a writer and a graduate student at the University of Alberta, where he’s getting his doctorate in English literature, with a focus on Indigenous literature, colonial history and archival practises.

The ambient air quality monitoring station, commissioned at the beginning of July, monitors the odour in the air emitted from Edmonton’s only wastewater treatment plant. It measures various compounds, including nitrous oxide and hydrogen sulfide. The monitoring station is a requirement of Alberta Environment.