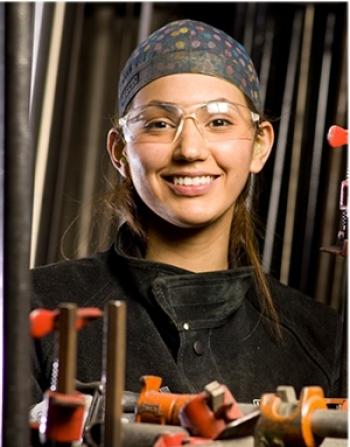 The newest Indigenous-focused course at Women Building Futures is a partnership with Kinder Morgan Canada for its Trans Mountain Pipeline expansion. (Photo: womenbuildingfutures.com)

“Our success overall to date has been a placement rate of about 92 per cent." ~ Kathy Kimpton, CEO and president for Women Building Futures

“We are very selective about our industry partner… making sure that these industry partners are very sincere in their approach and committed to making the transition for these women into this industry a very successful one.

Kinder Morgan approached WBF about the potential partnership several months back, she says.

“They were very interested in trying to do some work that would help empower some of the communities where some of these Indigenous women were residing,” she said.

“Over the past several years, we’ve worked hard to build upon our existing relationships to pave a path forward for our company to deliver project benefits for Indigenous communities,” said Ian Anderson, president of Kinder Morgan Canada, in a news release.

The partnership will result in 24 Indigenous women being recruited and trained over the next two years. The first group of 12 will begin their eight-week session in July in Edmonton at WBF’s classroom and training facility.

The second intake will occur in 2018. The training will allow the women “safe and productive entry into the pipeline construction field,” according to the news release. It’s the first time WBF will offer this type of training.

The partnership follows the announcement last November by Prime Minister Justin Trudeau, approving the $6.8 billion Trans Mountain pipeline expansion, which will triple the capacity of its northern Alberta-to-Burnaby pipeline system to 895,000 barrels a day.

However, the pipeline project still needs to meet 157 conditions outlined by the National Energy Board and there is stiff opposition to the expansion from Indigenous groups.

“Our success overall to date has been a placement rate of about 92 per cent. Now, we don’t guarantee employment when they’re done this program, but we have a very careful selection process at the front end and that simply ensures we’re getting the right applicant in and they’ll be successful when they graduate and they’ll be highly employable when they’re done. So we anticipate that placement rate should hold true,” said Kimpton.

If the project does not go ahead, she says the women will still have received valuable training that will make them employable for work with other companies in the pipeline construction field, as well as other industries.

“We would then work with these women to try and garner employment in one of the other areas, again turning to our other industry partners for assistance for that,” said Kimpton.

Five-day information sessions as an introduction to the work are scheduled for Edmonton and Wetaskiwin in March and Hinton in early April.

This screening process, says Kimpton, will allow the women to make an informed decision on whether they are suited for this work. For those women with children, even though WBF doesn’t arrange child care, the organization will work with the communities to ensure the appropriate resources and supports are in place. WBF training tends to attract those between the ages of 24 and into the early 50s.

“If we feel that there isn’t a certain level of readiness for these women, where they don’t have child care in place, so they might struggle in other areas, we’d be apt to be working with them over the last little while to get those resources in place before we accept them into the program,” said Kimpton.

WBF began operating in 1998. To ensure success in placing women in the trades, Kimpton says WBF selects participants carefully, fully supports them, and ensures the women understand the work environment they are entering.

“We are working with industry partners that are receiving our women with arms wide open because they’re really quite excited about the results they have seen so far and the diversity these women add to their work force. And as we all know, a diversified work force is certainly a more productive and efficient one. So it’s really a win-win for everyone,” she said.