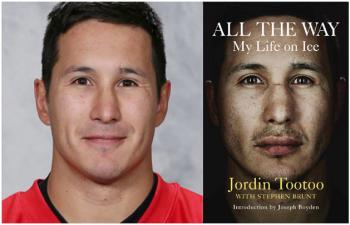 Tootoo, the first Inuk to play in the NHL, will not have to travel far to speak at the conference, scheduled for Nov. 12 to Nov. 14.

That’s because the annual event, which is expected to attract more than 700 delegates, will be staged in the British Columbia city of Kelowna.

Tootoo, who grew up in Nunavut, has spent the past 15 summers in Kelowna. The 36-year-old, who officially retired from pro hockey last October, moved his young family – he has two daughters aged three and one with wife Jennifer – to Kelowna on a full-time basis last year.

“Tourism is a big thing throughout our Indigenous communities,” said Tootoo, who played 765 NHL games during his pro career.

He’s hoping his presence at the conference, organized by the Indigenous Tourism Association of Canada (ITAC), will inspire others to visit some of those communities.

“It’s about educating non-Indigenous people to come out to our communities,” said Tootoo, who played for the Nashville Predators, Detroit Red Wings, New Jersey Devils and Chicago Blackhawks during his pro career.

Tootoo, however, is expected to also talk about subjects other than just tourism at the conference.

Since retiring, he’s spent a good chunk of time travelling across the country speaking to youth and various groups about his life story.

That story includes plenty of ups and downs. Though he did go on to play in the NHL, Tootoo had his share of struggles, including the suicide of his older brother Terence and his own substance abuse problems, which began as a young teen and continued into his NHL days.

He’s approaching a decade of sobriety.

“I can only share what I know,” Tootoo said. “And it’s about reaching out and lending a helping hand. I think my story is one a lot of people can relate to.”

Tootoo’s memoir titled All The Way: My Life On Ice, published in 2014, was a bestseller.

Keith Henry, ITAC’s CEO and president, is thrilled the former Indigenous hockey star will be speaking at the November conference.

“We’re always trying to promote Indigenous role models,” Henry said. “And Jordin Tootoo is a great one. He’s spent a lot of time in the Okanagan (region). And a lot of people love hockey in that part of the world.”

This will mark the eighth year of the international conference, which has grown annually since its inaugural event in 2012 in Osoyoos, B.C. That first event attracted about 100 delegates.

Henry is confident the event will continue to grow each year.

“Our vision is to ultimately see 1,000 delegates,” he said. “I really think this is possible within the next three to five years with very little extra work.”

Henry said organizers are well on their way to reaching their goal of at least 700 delegates for this year.

Henry believes the large number of registrations to date is because organizers for the first time started offering a special rate for those who signed up as early as April.

Henry said there are about 1,800 Indigenous businesses across Canada. Besides targeting those owners, conference organizers are also hoping to attract various community officials as well as Indigenous economic development officers and marketing tourism partners.

Henry estimates 10- to 15- per cent of those attending the conference are international delegates.

Foreign delegates this year are expected to arrive from the United States, Mexico, Australia, New Zealand and some African countries.

Henry said about 20 per cent of the delegates each year are non-Indigenous.

The ITAC consistently works with various groups to promote the Indigenous tourism industry.

Delegates will participate in workshops, panel discussion and learn about ways to support the growing demand for Indigenous tourism.

Henry said the industry is especially booming in Canada’s most westerly province.

“Indigenous-owned businesses are worth a lot to British Columbia and this region has done really well,” he said. “It’s grown a lot in recent years with wineries, outdoor adventures and accommodations.”

For more on the conference visit https://indigenoustourismconference.com/