The Huskies hosted a dinner at Oscar’s Place, a homeless shelter in The Pas,

“I was beaming with pride just to have the kids there. It was out of their comfort zone. Let’s be serious.” It’s not easy for some kids to walk up to a homeless person and talk to them.

A Manitoba youth hockey team comprised predominantly of Indigenous players is one of the Top 10 semi-finalists in a national contest.

Earlier this week The Pas Huskies Peewee squad discovered it had advanced to the semi-final stage of the Chevrolet Good Deeds Cup.

This marks the second year of the contest, run in partnership with Hockey Canada. The contest is open to Peewee squads across the country who perform a good deed in their community.

The Huskies earned a semi-final berth for their volunteer efforts at Oscar’s Place, a homeless shelter in The Pas, which primarily caters to Indigenous people.

Members of the team and their families assisted with a dinner at the shelter in early December. 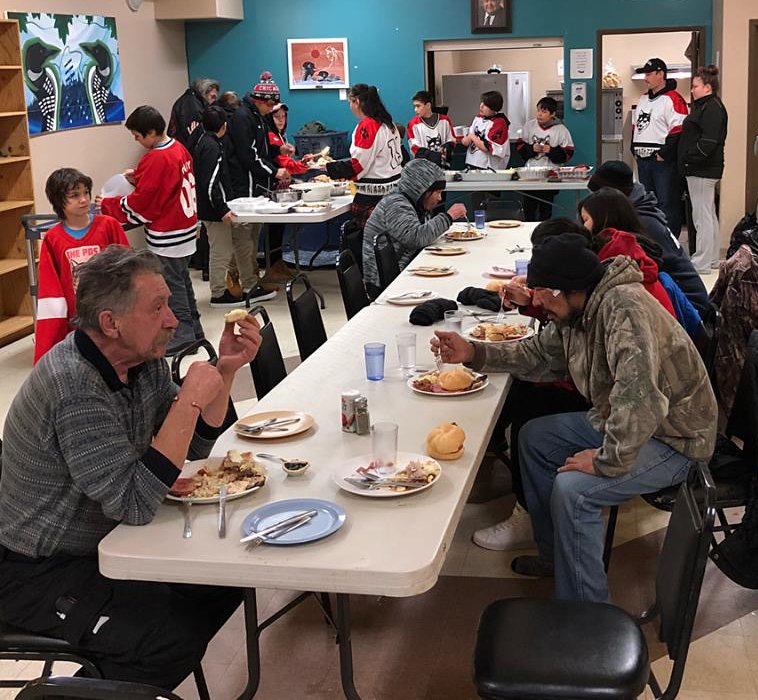 “We’re very excited about it,” Huskies’ assistant coach Jerome Conaty said of club’s semi-final selection in the contest. “There’s hundreds of entries across the country for this. To be recognized among the Top 10 is a very big deal for us.”

After examining all of the entrants, contest organizers selected the semi-finalists. But now members of the public will decide which three clubs will advance to the finals.

All Canadians are encouraged to go to http://chevrolethockey.ca to watch videos of the semi-finalists and cast their votes.

Every time a video is watched it counts as one vote. Here's a direct link to the Huskies video:  https://www.youtube.com/watch?v=TLmg4bVpnrQ

Voting began on Monday and will continue until Jan. 28.

After the three finalists have been determined, contest judges will then select the over-all winner.

Just by advancing to the semi-final stage, the Top 10 entrants receive $2,000 each for their charity of choice.

Squads that advance to the final round will receive an additional $3,000 each. And the club that ends up as the over-all winner will get a total of $15,000.

In addition to that, members of the winning side will have a practice later this year run by a yet-to-be determined famous player who serves as a Chevrolet Canada ambassador.

Conaty said the Huskies were planning to volunteer at the shelter even before they found out about the Goods Deeds program.

Once they discovered the details of the contest, team officials invited along a videographer to take footage of the evening, which would assist with the entry.

“We felt it was important to have our kids come in and assist these folks,” Conaty said.

The shelter has had 70,000 safe sleeps since it opened its doors more than a decade ago.

“It’s a real need for our community,” Conaty said. “We have a lot of transient members and a lot of residential school survivors.”

As for the Huskies, at least two-thirds of the club’s 15-player roster are either First Nations or Métis.

Two of the team’s players are from Moose Lake (Mosakahiken) Cree Nation and travel about an hour-and-a-half each way to get to practices and games.

Club officials were planning to use the volunteer night at the shelter as a team-building venture.

Many of the players’ parents also came out to lend a hand.

“It was a team/family affair,” Conaty said.

Conaty added he was proud of seeing the young players doing their bit to help others in the community.

Conaty said he believes team members will probably assist at the shelter again.

“I don’t see why not,” he said, adding the team did stage a barbecue at a local car dealership with proceeds going to the shelter. “I do think it’s on the kids’ radar. They see there is a necessity for this and for supporting the shelter.”

Other volunteer work for the players is a community clean-up.

The other semi-finalists in the Good Deeds contest included five entrants from Ontario. They are representing the communities of Clearview, Flamborough, Georgetown, Quinte West and Smiths Falls.

Other teams that were named semi-finalists are from the following communities, Whitehorse, Fort St. John, B.C., Okotoks, Alta. and the Newfoundland town of Paradise.