Thank you for the guidance to start our stories 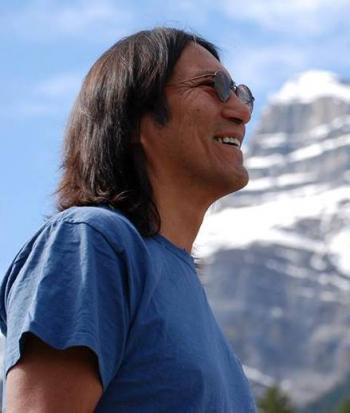 “He has written some of the most important books in Canada." ~ Shelagh Rogers

A great Canadian First Nations writer and journalist has passed away. Richard Wagamese, an Ojibway writer from the Wabaseemoong Nation in northern Ontario, died Friday afternoon at the age of 61. Wagamese has been a professional writer since 1979 and has been touching the hearts of people ever since.

Canadian broadcast journalist and host of CBC Radio One’s “The Next Chapter” Shelagh Rogers, is a long-time friend of Wagamese. She heard about his passing from Wagamese’s partner, just after she sent out a Tweet congratulating Wagamese on getting the nomination from the BC Book Prize Society for his work “Embers: One Ojibway’s Meditations”.

“I went on Twitter and I decided I would say ‘I’m so thrilled for my chosen brother that he has made the shortlist for the B.C. books…’ Within the hour his girlfriend called me to say that he was gone. That was about 4 o’clock yesterday afternoon,” said Rogers. Rogers says she and Wagamese were close enough they called one another “chosen” siblings.

Rogers first met Wagamese during an interview with him just after his very first novel, “Keeper ’ N Me”, was published in 1994. The novel won the Alberta Writer’s Guild Best Novel award that year. Rogers says she loved Wagamese’s laugh and the warmth he brought to her studio. They shared a good chuckle over how she mispronounced his last name, making it sound as though he were Italian.

“We both just cracked up and could barely get it back up because we were laughing so out loud… And afterward we stayed in touch,” she said.

Over the years, she also had the opportunity to have many professional interviews with Wagamese, on topics such as his well-known books, like “Indian Horse”—a novel published in 2012 about a young boy attending an Indian residential school in the 1960’s—and on subjects like Storytelling as Redemption (the title of an interview from April 2013). Rogers believes his work has been instrumental in helping non-Indigenous Canadian understand the real impact of the residential school system.

“He has written some of the most important books in Canada… I think about a book like “Indian Horse”, “where people who didn’t understand or don’t understand what residential school was like…. This book gets to the emotional truth of that… and I have seen it change people’s hearts and minds,” she said.

Wagamese’s niece Rhonda Fisher was able to share some of her thoughts on her uncle’s passing with Windspeaker, as well. She had known him since she was a child, and he had offered her much comfort after the passing of her own mother (Wagamese’s sister), Fisher said.

“He kept his professional life from us. That was his. At family gatherings… he was always laughing all the time, telling jokes. But there were times when he would be serious, in his talks with me. He was very protective I found, especially after my mother passed away,” she said.

According to Fisher, Wagamese’s true talent with words showed at this time. And it’s how Fisher now feels about her uncle, now.

“He came up to me and held me… told me that your mother now is the wind you feel on your face, the raindrops you feel, and the warmth from the sun… she is all around. I actually put that as my status this morning and said ‘Now I will feel you too,’” said Fisher.

Some of the other award-winning literary works from Wagamese include his memoir “One Story, One Song” published in 2011, which won the George Ryga Award for Social Awareness in Literature; and the novel “Dream Wheels” published in 2007, which won the Canadian Author’s Association Award. Wagamese was a journalist prior to becoming a book-writer and was the first Aboriginal Canadian to win a National Newspaper Award for his column writing (won in 1991).

Wagamese’s personal story is moving, as he spent much of his youth living in poverty, homeless, and on the street, then later reconnected with his family, his community, and his Indigenous identity. He was open about his struggles with alcoholism, and being abused as a child. But he also shared that he had met many inspirational characters along the way, such as his meeting with Muhammed Ali, which Wagamese talks about in “One Native Life”. Wagamese was a homeless youth at the time, and Ali bought him a piece of lemon pie and a milkshake—a kindness Wagamese never forgot.

Wagamese’s most recent fiction novel was “Medicine Walk”. At the time of his passing, he was working on a sequel to it. A Facebook post he shared June 8, 2016 conveyed his enthusiasm about his upcoming piece.

“Up at 4 a.m. with the story clamouring for attention. 8 pages later my work is finished for the day after a magnificent outpouring. I come away absolutely convinced again that this is what I am meant to do in this reality. But it takes discipline and sacrifice to get a book done. I know. I’ve done it 14 times already. Love this, this joy, this articulation of spirit…”

The following letter was given to Windspeaker from Wagamese’s granddaughters, Dakota and Zoey, ages 17.

“Words can't even begin to describe how much you'll be missed. I'll start with I miss you already and I love you more than you could have ever known. You were an amazing grandfather and will forever be in my heart. Your integrity, strength, and will to help others has motivated and helped shape me to be the person that I am today. I'll miss your crazy pictures that you would send me daily and the long, meaningful conversations that we would have and hearing you call me "my granddaughter". Your loud, contagious laugh and smile will forever be remembered as well as the outgoing, positive attitude that you always had. You helped me to understand my Ojibwa background and through your experiences you have helped to lead me through my hard times. Your novels help shape the future of not only myself, but those who have read your words of wisdom and have been touched by your experiences that you bravely shared with the world. You meant the world to me and this is a hard time, but with your teachings we will get through it and so, I thank you for the guidance and knowledge you have given me and the chance to know an amazing man like you. When I hit a hard time I will remember you and get through it the way you have shown me. It's as you once said, "All that we are is story. From the moment we are born to the time we continue on our spirit journey, we are involved in the creation of the story of our time here. It is what we arrive with. It is all we leave behind. We are not the things we accumulate. We are not the things we deem important. We are story. All of us. What comes to matter then is the creation of the best possible story we can while we’re here; you, me, us, together. When we can do that and we take the time to share those stories with each other, we get bigger inside, we see each other, we recognize our kinship – we change the world, one story at a time…" Thank you for giving me the guidance to start my story. I love you. ~love your granddaughters.”