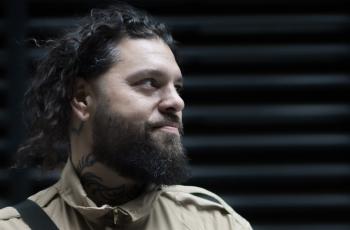 “At the time, I didn't realize I was being tortured. I thought that this was the way it was supposed to be; routine beatings by guards, fear tactics and isolation were all part of being in segregation.” — Tank Standing Buffalo
By Travis Klemp
Local Journalism Initiative Reporter
Windspeaker.com

Tank Standing Buffalo did not make his new animated short for you. Don’t get him wrong. He wants people to watch his new film, which has been selected to be screened at the Toronto International Film Festival (TIFF). But this was an opportunity to face his own past and come to terms with the trauma he has faced in his life.

RKLSS, a five-minute animated short, follows Standing Buffalo and his friends in a high-speed chase after a heist gone wrong. Woven into this high-paced story is a beautifully creative look at Tank’s time spent as a young offender in a criminal institution. His experiences with beatings and torture at the hands of prison guards during a gruelling, unnerving six-months of involuntary segregation is explored.

“It wasn’t until I started doing research and learning about the long-term, damaging impact of involuntary segregation and the way it makes people more impulsive, increases depression and suicide, that I realized how it was effecting me today. I wanted to figure out what happened to me.”

One of the major things that Standing Buffalo learned was that a common result of spending more than a week in confinement is the reactionary need for human interaction.

“I would do things like kick a plate of food back out to the guards, which would lead to them coming in in full gear and beating me. It didn’t matter if it was a punch or a hug. I was just reaching for some kind of interaction.”

Standing Buffalo, who is a mixed-race person with First Nations heritage through his mother, who belongs to the Caldwell First Nation in Ontario, did not make this film to be an agent for change in the criminal justice system. He made it to come to terms, selfishly as he puts it, with his own demons. A process that would not have taken place if not for the support and encouragement of his producer, Xstine Cook, artistic director and founder of Calgary Animated Objects Society (CAOS).

“At first I didn’t want to tell my story or go to a place that I knew would be super difficult to go to, but Xstine really pushed me. I would not be here without their support. I know now, after researching and making the short that it could seem like a non-violent protest, but I made it for me,” said Standing Buffalo.

“At the time, I didn't realize I was being tortured. I thought that this was the way it was supposed to be; routine beatings by guards, fear tactics and isolation were all part of being in segregation.”

RKLSS was written, directed, and animated by Standing Buffalo over the course of a year using 2D animation and a program called Toon Boom. And while Standing Buffalo says there was not an educational motive behind the film, there are additional benefits. RKLSS was commissioned by CAOS as part of a larger project to bring awareness to the government of Canada’s Canada Learning Bond Program, which provides up to $2,000 to low income youth born after 2004 for post-secondary studies.

Standing Buffalo is a man of many talents. An illustrator, tattoo artist and designer of tiki mugs who has now made his foray into creating art that is more personal. In doing so, he has found a way to use his art to protect himself and manage his impulses.

“Art saved my life at a very young age. It gave me a way and a reason to stay out of trouble. It let me connect with people. Now, because of what happened to me in segregation, I need a very regimented schedule. Wake up, make some art, eat, take a break. It is all a routine to keep me from some of my addiction issues and making bad decisions.”

Now, Standing Buffalo’s art and devastating life story of resilience is garnering attention at one of the largest and most prestigious film festivals in the world, a feat that he is both grateful for and surprised by.

While he is thrilled to have RKLSS included in TIFF’s lineup, now that he has seen the attention it has garnered, he hopes it will shine a light on the ongoing inhumane treatment of prisoners in Canada’s justice system.