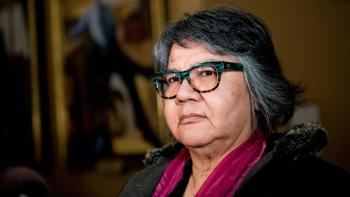 A statement released this evening, June 17, by the Office of the national chief, strikes back at the suspension doled out tonight to RoseAnne Archibald, elected as national chief last July, for breaching “her obligations to the AFN – contrary to her Oath of Office, the organization’s Code of Conduct and AFN Whistleblower Policy”. The suspension was announced in a statement by the Assembly of First Nations' executive committee and national Board of Directors

The statement from the Office of the National Chief reads “As expected, actions have been taken to silence National Chief RoseAnne Archibald for speaking her truth about ongoing misconduct at the Assembly of First Nations.”

It said this signalled the “beginning of a seemingly staged coup by Regional Chiefs without informing the National Chief.” It said Archibald was finding out about her suspension through media.

The statement asks for a formal motion in order for Archibald to “assess her next steps.”

The statement, released on social media, concludes with:

In a statement this evening, the Assembly of First Nations executive committee and national Board of Directors announced the suspension of the National Chief RoseAnne Archibald, “effective immediately.”

The suspension was prompted by her public statement issued on June 16, 2022, “that breached her obligations to the AFN – contrary to her Oath of Office, the organization’s Code of Conduct and AFN Whistleblower Policy”.

The National Chief was suspended with pay pending the outcome of a current investigation into four complaints against her, the statement reads.

She will be suspended until the executive committee reviews the investigation report and makes a final decision regarding her status.

Archibald has been ordered not to discuss the on-going investigation publicly and is prohibited from attending the Annual General Assembly and Chief’s Assembly meeting in early July.

“It is regrettable that we had to take this severe action but we had no other choice,” said Regional Chief Paul Prosper, an AFN spokesperson.

“The National Chief has committed serious breaches of her obligations to the AFN through unfounded and unsubstantiated public attacks on the integrity of our organization and our employees that will only serve to undermine the good work we do as we continue to serve our First Nations communities.”