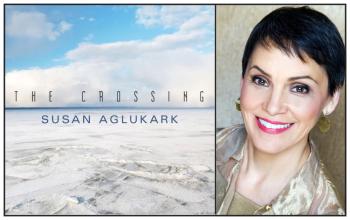 The Crossing is Susan Aglukark's tenth studio album and is available now.

“We didn’t know those early people and yet I remember when I think of my great-aunts and my great-uncles, my grandparents, my great-grandparents on both sides, and how much they loved life in the north and that they transferred that love to us.” — Susan Aglukark
By Rebecca Medel
Local Journalism Initiative Reporter
Windspeaker.com

Dropping a new album and winning an award are major achievements this spring for multiple JUNO award winner Susan Aglukark.

The Inuk singer-songwriter released her tenth studio album, The Crossing, on April 29, and will receive the 2022 Humanitarian Award presented by Music Canada at the JUNOS on May 15 for her work with the Arctic Rose Foundation.

The award is given as a tribute to Aglukark’s long-standing dedication to improving the lives of children and youth in northern Indigenous communities. The foundation is dedicated to improving the mental and emotional health of children and youth through Indigenous-led arts-based after-school programs, as well as other cultural and creative projects.

Aglukark left her home in Arviat, Nunavut more than 30 years ago to work in Ottawa as a linguist. She has been open about the sexual abuse she suffered as a child in Nunavut. The perpetrator a neighbour. She left home after his prosecution.

“The justice system did what it could, but it left me emotionally displaced and my abuser quite comfortable at home,” Agluark told Windspeaker.com. “I had to change my personal situation or be taken up by it. And so I had to leave. I had no plan.”

She was offered a job with the Indian Affairs department, a one-year contract.

“I just simply said to my mom, ‘I’ve got to go. It’s only one year. We’ll see what happens beyond that, but I can’t stay.’ And that was it. There was no plan.”

She simply knew one truth. “I’ve got to change my personal circumstances, because it was not good.” She launched what would become a successful career as a singer-songwriter.

Aglukark was noticed by both MuchMusic and CBC Radio after she recorded a demo called Dreams For You on cassette in 1990. This would become the Arctic Rose album released by EMI Canada in 1992.

The album “exposed a lot”, said Aglukark, including the lack of supports and services in northern Indigenous communities and the high rate of suicide among youth. Aglukark wondered what more she could do to help.

“Those of us who can, we do, and we should,” said the singer about the reach and responsibilities of fame and influence.

“I started volunteering with boards and committees and organizations and learning about what’s the best route and ways to do the best work possible. About 12 or 13 years later, I decided I’m going to put all the bits and pieces of my learnings into something and that became the Arctic Rose project in 2012.”

After searching for a charity that was mostly Indigenous-led that aligned with her ideals, Aglukark decided the best thing to do was to start her own and that’s when the process of applying for charitable status began. The Arctic Rose Foundation was formed in 2016.

“I just love what I do so much,” Aglukark said. “When I left, this was nowhere near what I imagined my life would be 30 years later.”

Aglukark says watching the youth participate in the program gives her hope for the future.

The new album The Crossing, the first in nine years, is about journeys and belonging.

“Writing this album through our contemporary Inuit lens has been a lesson in belonging,” Aglukark said. “As we correct the narrative, we are also finding puzzle pieces in our own healing journeys, and what a privilege it is to have this platform to share these lessons from.”

Aglukark said the stories for the album have been forming since the late ‘90s. After reading an academic paper titled Beringia about the Bering Strait mass crossing theory, she wanted to connect with her origin story.

“The songs themselves weren’t being written per se. There were bits and pieces and notes here and there and conversations and facts and a lot of reading… You know, we hear stories passed down from generation to generation, but what was the origin story and how can we know that? We want those deeper connections and they must come from us. They can’t be told to us by someone from the outside. We have to connect with it ourselves in the way that we uniquely do.”

The song Winter’s Dream speaks of a journey of ancestors crossing the Bering Strait.

“When I first started writing the song, I really wanted to write it as much through the lens of the ancestors as I could without really having known them. We didn’t know those early people and yet I remember when I think of my great-aunts and my great-uncles, my grandparents, my great-grandparents on both sides, and how much they loved life in the north and that they transferred that love to us. It was very evident to me, and still is, that we simply love our land. We just love it so much and everything in that relationship with it came from somewhere. And so the writing of the song Winter’s Dream is just simply my love song to that.”

Though she has built a home and career in Ontario, she finds it very hard to leave the north, and in particular Rankin Inlet, when she visits.

“When I’m home my heart is there,” she said.

One such time was three or four years ago, and she turned her feelings about leaving into the song “Journey Home”.

Aglukark’s previous awards include three JUNO Awards and seven additional nominations, the first-ever Aboriginal Achievement Award in Arts & Entertainment, the Canadian Country Music Association's Vista Rising Star Award, and several other CCMA nominations. She was presented the Officer of the Order of Canada Award, and was awarded the Governor General's Lifetime Artistic Achievement Award in June of 2016.

Aglukark says in a press statement that she feels honoured to be receiving the Humanitarian Award and proud of the efforts of the Arctic Rose Foundation.

It’s “a privilege to have had the opportunity to help create safe spaces for Northern Inuit and Indigenous youth to explore their own potential and forge connections through Indigenous-led programs,” states the release.

But while optimistic that the work being done is having success, Aglukark knows there is “no easy fix. There’s no Band-Aid. We’ve got to feel through it, and we can guide each other through feeling through these things,” she said.

The Crossing is available now via Linus Entertainment.