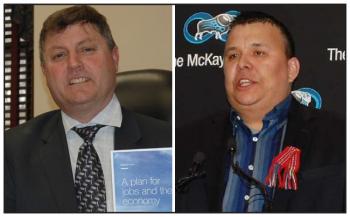 “Minister Wilson has made it very clear to me in the past that the mandate of the government is to empower Indigenous communities to take advantage of opportunities and that’s obviously something that’s critical to Fort McKay.” — Ron Quintal, president, Fort McKay Métis Nation
By Shari Narine
Local Journalism Initiative Reporter
Windspeaker.com

“There’s still an opportunity for success,” he said, as long as the Crown corporation’s mandate “to facilitate investment by Indigenous groups in natural resource projects and related infrastructure” remains in place.

“I think there’s a lot of questions up in the air at this point. I think that’s going to be really important for us to continue a conversation with the Indigenous Relations ministry to make sure that we’re not only asking these questions, but trying to make available some consistency here and continuity. I think we need to make sure that those are critical aspects of AIOC,” said Quintal.

Feehan referred to the turnover as “real turmoil.”

Dubois is pursuing her own interests, said Wilson, while Church is a “very busy businessman.”

Feehan called Wilson out for not revealing the departures in regular government press releases.

Dubois, who held the position as AIOC’s inaugural CEO for 14 months, was “thank(ed)… for her efforts” in a news release issued through Global Newswire on Nov. 12. AIOC’s COO Matthew Machielse was announced as the interim CEO.

Church’s replacement by vice-chair Stephen Buffalo was included in an Orders in Council (OIC) Nov. 24. OICs are used to make regulations, appoint individuals to boards, proclaim acts in force, and make other government decisions. The lists can be quite lengthy.

That Nov. 24th OIC also announced the appointment of new director Chana Martineau and the designation of serving director Gary Bosgoed as vice-chair. Aroon Sequeira was reappointed as director until January 2024.

The OIC makes no mention of directors Strater Crowfoot or Peter Williams, who are named as board members on the updated list on the AIOC’s website. They were among the initial board appointments in early 2020.

Feehan challenged Wilson to conduct an internal investigation “given that one of the directors who was removed” from the AOIC is involved in a $25 million lawsuit alleging racism and sexual harassment against him.

“That issue is before the courts and he (Crowfoot) has not even actually left the board,” said Wilson.

Windspeaker.com requested a telephone interview with Wilson, but instead received a statement.

“There are more Indigenous than non-Indigenous board members guiding the AIOC for the first time,” Wilson’s statement read.

Quintal says he heard from “various people in government” that changes were coming to the AIOC board, including the position of chair, but he had not been made aware that Dubois would be leaving.

“The chief executive officer was a bit of a surprise to me when I found out this weekend,” said Quintal, adding her departure was “a bit disheartening.”

Quintal says it’s “critical” to financial institutions and private investors that the AIOC be stable.

He knows first-hand what that stability can bring.

AIOC supported the partnership with a $40 million loan guarantee.

“It’s a huge relief for us to know now that financial sustainability is right around the corner,” said Quintal.

The Northern Courier Pipeline System is the most recent of three projects supported by the AIOC since it became operationalized in early 2020.

In his statement to Windspeaker.com, Wilson said these three projects represented “backstop loans worth $160 million, creating new revenue streams for 15 Indigenous communities in Alberta, some of which would have never had a chance like this.”

AIOC has $1 billion of Alberta government funding for loan guarantees. It supports projects that require a minimum of Indigenous investment of $20 million. Projects must involve natural resources and related energy infrastructure.

Quintal is confident that regardless of the changes of AIOC personnel, the success of Indigenous economic development will remain front and centre.

He has yet to receive that reassurance since the departures, but Quintal says he will be reaching out to Wilson this week.

He will also be offering his expertise to the minister when it comes to selecting a new CEO. Quintal serves on the Northern Corridors Task Force and the Economic Development Corporation in Wood Buffalo.

“Anything I can offer by way of opportunity to identify some strong candidates, I think we’d be open and welcome the opportunity to have that conversation with the minister,” said Quintal.

Windspeaker.com requested a telephone interview with board chair Stephen Buffalo, but had not heard back by press time.