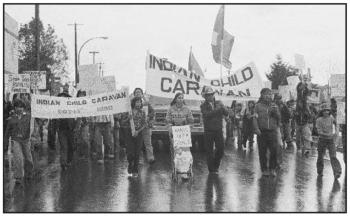 The Indian Child Caravan of 1980 was part of the Splatsin effort to regain jurisdiction of child and family services from governments. The caravan travelled from Prince George to Vancouver gathering support along the way. By the time it made its way to then deputy premier Grace McCarthy’s home it was 1,000 people strong.

“I look at it like this: C-92 is like reconciliation legislation, whereas the Indian Act is really about genocidal legislation. The Indian Act was intended to kill the Indian in the child and separate us in all the things that it's done. C-92 is talking about recognition of our own laws…” — Splatsin Kukpi7 Wayne Christian
By Shari Narine
Local Journalism Initiative Reporter
Windspeaker.com

The Splatsin band of the Secwepemc Nation will offer its 40-plus years of expertise in the exercise of jurisdiction and management of child and family services in a two-day seminar at the end of March.

Kukpi7 Wayne Christian says this is his community’s way of repaying those First Nations that supported Splatsin in 1980 when the band lobbied the British Columbia and federal governments to regain control of their children and families through the band’s Bylaw 3, a Bylaw for the Care of Our Indian Children.

Now other First Nations have the opportunity to exercise their jurisdiction over their children and families through the federal Bill C-92, an Act respecting First Nations, Inuit and Métis children, youth and families.

While Splatsin doesn’t have to rely on C-92, Christian is no stranger to the legislation. He says he worked with then-Indigenous Services Canada (ISC) Minister Jane Philpott “in the background”, advising her on the development of the bill.

In November 2017, Philpott referred to the disproportionate number of Indigenous children in the child welfare system as a “humanitarian crisis.”

“I worked with her, supported her, did ceremony with her to help her stand us up because of how important it was for all the children across Canada,” said Christian.

However, the Act doesn’t give Indigenous peoples everything they want. Christian points to a lack of financial commitment.

“The battle ahead of us is to make mandatory resources for the legislation. That’s what we have to push at the higher levels,” he said.

“It’s the opportunity. That’s the key. It lays the foundation. I look at it like this: C-92 is like reconciliation legislation, whereas the Indian Act is really about genocidal legislation. The Indian Act was intended to kill the Indian in the child and separate us in all the things that it's done. C-92 is talking about recognition of our own laws, and recognition of how do we change the future for the children. That is an act of reconciliation. It's going to lay a foundation and we're going to see a difference 10, 20, 30, 40, 50 years from now,” said Christian.

As Indigenous Nations move forward in determining their laws and how to implement their jurisdiction, Christian says they must look inward.

“One of the key things is that they need to consult and talk with the old people, their Elders. The Elders can actually inform them what is their inherent law because our people had laws. We had a system of justice. We had a whole process set up before they imposed the Indian Act on us; they imposed the provincial legislation on us. That's the key in this whole process. It lies within the community,” he said.

It was this foundation Christian built on when he fought the federal government and the province for control of their families and children in 1980.

“We let the community know that this is how we're going to set this up. The Elders at that time were born in the early 1900s so they knew the oral history, the important part of the process,” he said.

In implementing their jurisdiction, Christian says his council doesn’t direct operations, but they do set and implement the legislation. They also provide family history and know the current situation of the family, which is input they provide to staff as decisions are made on the care of children.

“It's not so much hands-on but we're directly engaged in the decision-making and that's what inherent jurisdiction is about. We get to make our own decisions about our children. That's really important in this process,” he said.

“One of the key things the colonial government has done is separate us by this on- and off-reserve paradigm through the Indian Act.… We said, ‘No. We’re all the same blood. Wherever our children are we need to go and help them and their families.’ And that’s what we’ve done over the years. We’ve gone all over North America,” he said.

Christian said chief and council know every child who has gone into the system over the past 40 years, both on and off-reserve.

The upcoming seminar will focus on jurisdiction and what was learned through Splatsin’s experience.

The virtual seminar is scheduled for March 24 and March 25.