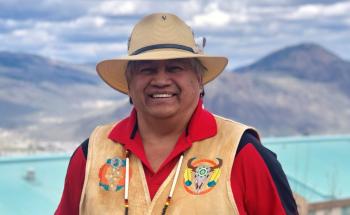 “It traumatized me, but it triggered me into thinking that everything I do I have to do so no children suffer the same fate as my brother.” —Kukpi7 Wayne Christian of the Splatsin band, Secwepemc Nation
Shari Narine
Local Journalism Initiative Reporter
Windspeaker.com

A series of personal tragedies more than 40 years ago led a young man to listen to the wisdom of his Elders to guide his First Nation to take control of the fate of their families and children by exercising inherent jurisdiction.

“I was fortunate. The Elders and community gave me the responsibility to be the voice for the community. But it wasn’t just me. It was our community at the time that stood up,” said Kukpi7 Wayne Christian of the Splatsin band of the Secwepemc Nation. Christian has served several sets of consecutive terms as chief totalling 24 years.

In 1980, when Splatsin (then referred to as Spallumcheen) adopted Bylaw 3, a Bylaw for the Care of Our Indian Children, Christian had been elected chief the year before.

“I was young at the time. I was 25, but I didn’t think of it as an age thing. I thought of it as a responsibility thing. No matter what age I was, I had a responsibility. So I did what I was asked to do. That’s how it sort of unfolded for me at the time,” said Christian.

It was tragedy that led him to that understanding.

Christian is a product of the Sixties Scoop. When he was 12 years old, he returned home from working at his mother’s family’s farm in the state of Washington to find his mother sitting on the edge of her bed with his two-month-old sister in her arms. His other four sisters and four brothers were gone. His mother told him that social workers had come and taken his siblings and they were coming back for him and his baby sister.

As the oldest male in the family, Christian blamed himself for failing to protect his family, which he described as having been “decimated.”

“It took me a long time to understand. I was just a child at that time. What could I have done?” he said. “My life changed after that.”

A year later, at 13 years of age, Christian contemplated taking his life because he thought there was nothing left to live for.

However, it was Christian’s brother a decade later who committed suicide. Christian was foster parent to his brother and found his brother’s body. Later Christian would come to realize his brother had mental issues and probably should have been hospitalized and he would also realize that his community had neither the services nor resources to deal with it.

“It traumatized me, but it triggered me into thinking that everything I do I have to do so no children suffer the same fate as my brother,” he said.

A year after that, Christian’s mother died of an ailment that could have been dealt with. However, because of the way the healthcare system treated her, she never received the proper care.

“So I had those two. My mom and my brother had a real impact on me. I can’t just get angry. What am I going to do about this? So that's why when I asked the Elders ‘How do I look after this?’ they gave us the answer. Then I picked this up and said, ‘This is what we're going to be doing.’ So I've been advocating for that, doing that ever since,” said Christian.

The Elders also told him that he was “considered the father of all the people here…. My role was to protect my family.”

In 1979 Splatsin had a population of about 350, and approximately 100 children had been removed from the community. Almost every family had been impacted by British Columbia’s child welfare system, said Christian.

In 1980, the Splatsin child care bylaw was passed and the community started lobbying the BC government hard for changes. The Indian Child Caravan, part of that lobbying effort, began its trek on the Thanksgiving weekend travelling from Prince George, BC to Vancouver. It picked up people and support from other First Nations communities, and by the time the caravan had made its way to then deputy premier Grace McCarthy’s Vancouver home it was 1,000 people strong and included children and their parents.

Along with the protest march, there was a media blitz that included spots on talk shows.

McCarthy, who was also human resources minister at the time, signed an agreement with Splatsin that the community would take over jurisdiction of its children – both on and off reserve – and they would jointly lobby the federal government for resources.

Days later, Christian confronted then Liberal minister of Indian Affairs John Munro at a Union of British Columbia Indian Chiefs general assembly and got a verbal commitment for funding for five years. Over 40 days, negotiations took place during which Munro told Christian that the federal government could not order the provincial courts to transfer their Splatsin children cases to the band. That section was removed from the bylaw and the federal government did not oppose its passage.

“It took us that level of political push and that’s the unfortunate part. Why have we got to do that all the time? We all seem to have to make political statements or do things where people see us as radical. We’re just standing up for our basic human rights,” said Christian.

Over the 41 years the bylaw has been in place, Christian said his community has continued to struggle with the intergenerational impacts of residential schools and the Sixties Scoop on their families and children.

However, the community, which has now grown to a population of about 1,000, has approximately 35 children in care presently, representing five or six per cent of the total population. Christian also pointed out that the band knows where all of their children in care are living.

“We’ve seen there’s been great successes because one of the things we really try to do is reunite the family,” said Christian.

As for federal Bill C-92, an Act respecting First Nations, Inuit and Métis children, youth and families, Christian said it recognizes what his community has been doing for 41 years. Now, other First Nations have the ability to exercise their jurisdiction over their children and families.

Splatsin will be providing their expertise to other First Nations in a virtual seminar scheduled for March 24 and March 25.

Christian said it’s his community’s way to repay those First Nations who supported Splatsin in 1980.