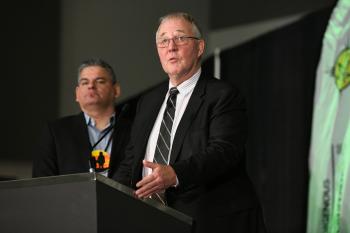 “This is a golden opportunity for all First Nations to get into the game.” — Christian Sinclair, Opaskwayak Cree Nation

Two federal ministers spoke at a conference in Ottawa this week which gathered Indigenous cannabis and hemp industry leaders to discuss next steps for further inclusion into the multi-billion-dollar burgeoning business field.

Health Minister Ginette Petitpas Taylor and Border Securities Minister Bill Blair, who is in charge of Canada’s Cannabis Act, made encouraging statements Feb. 21 to the group.

“We are supporting Indigenous communities who want to have a role in the cannabis landscape,” said Taylor. She said Canada’s legalization and regulation of cannabis presented an historic opportunity to do things better.

“Our government recognizes the important link between economic development and improved outcomes in health and social development. The Cannabis Act provides an open and fair licencing process.”

Blair said he acknowledged and respected the jurisdiction of First Nations, when asked if government would respect the Algonquin sovereign right to produce and sell cannabis in the territory that includes Ottawa.

“There is an important nation-to-nation discussion on how both of our jurisdictions are recognized, especially in the health and safety of our peoples.”

“Let’s jump on our own track, under our own steam… This is a once in a lifetime opportunity for all our Nations to partner and participate in this growing industry.”

He said building trust with governments and the Canadian public was required, however.

“This is a once in a lifetime opportunity for all our Nations to partner and participate in this growing industry.”

Kahnawake Grand Chief Joseph Tokwiro Norton stressed that his community is developing its own cannabis law in order to ensure public health and safety and access to a population of three million in the Montreal area.

“We are already a major contributor to the economy. We employ a lot of people. We need to educate the provincial and federal governments on what we do. We’re going to take advantage of our location. If cannabis is one product that’s going to be in demand, then let’s do it.”

Opaskwayak Cree Nation Onekanew Christian Sinclair brought his remote Manitoba community out of debt by investing and partnering in cannabis production and retail companies in Canada and California.

“Because of the current cannabis shortage for years to come, this is a golden opportunity for all First Nations to get into the game.”