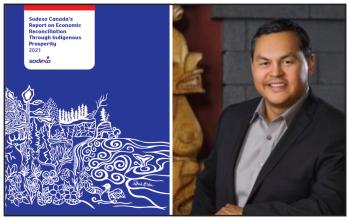 “We know this report will help inspire corporations, small and medium-size businesses and individual Canadians from all walks of life to join the journey to reconciliation and help shape the path to a better future.” — Sodexo Canada president Suzanne Bergeron
By Sam Laskaris
Local Journalism Initiative Reporter
Windspeaker.com

Sodexo Canada has about 10,000 employees in its food service and facilities management operations. It has been providing these services for more than four decades now.

The company is currently involved in about 40 partnerships with First Nations or Indigenous communities across the country. And it also does business with more than 100 Indigenous-owned suppliers.

This year, Sodexo Canada opted to publish a separate report on its efforts toward reconciliation. The 2022 report, titled Economic Reconciliation through Indigenous Prosperity, was released June 1 to coincide with the start of National Indigenous History Month.

The report details the company’s numerous initiatives that help contribute to Indigenous prosperity and quality of life.

“We really want to tell our stories and showcase them,” said Kruger, who joined Sodexo Canada in March 2017.

Prior to that Kruger spent eight years, 2008 through 2016, serving as the chief of the Penticton Indian Band in British Columbia. He also served eight years as a councillor for his First Nation before becoming its chief.

Kruger is thrilled to now be working for Sodexo Canada.

The report describes the requirement of all employees who are on salary to take the company’s mandatory online training program on Indigenous history and culture.

The goal of this training program, developed by the First Nations University of Canada and Reconciliation Education, is to help create a more inclusive workplace.

It takes about three hours to complete the online course, which is titled Indigenous Peoples of Canada: History, Culture and Reconciliation.

The report also includes information on some other training opportunities, on a volunteer basis, that are available to Sodexo employees.

For example, chefs in the company that are based in remote and Indigenous communities can acquire new culinary skills and qualifications by taking part in a Red Seal certification program, meaning they can be recognized for achieving a national standard in their trade.

“With this report we pay tribute to the remarkable efforts of Sodexo employees – both Indigenous and non-Indigenous – and our external Indigenous partners over two decades to help make possible the aspirational goal of meaningful reconciliation,” said Sodexo Canada president Suzanne Bergeron. She believes the report will convince others to follow Sodexo’s lead.

“We know this report will help inspire corporations, small and medium-size businesses and individual Canadians from all walks of life to join the journey to reconciliation and help shape the path to a better future,” she said.

Also included in the report is information about Sodexo’s internal Council for Indigenous People, an employee network that works to bring awareness of Indigenous peoples, their cultures and values.

The network has 30 chapters and more than 175 ambassadors across the country. The chapters lead outreach initiatives that strengthen relationships with Sodexo’s Indigenous partners and employees.

In the report, Michael Chidane, Sodexo Canada’s director of operations, energy and resources, explained the benefits of the Council for Indigenous People.

“You hear their personal stories and what people are going through,” he said. “Now you start to connect and start to understand. To see beyond the uniform. Instead of talking from the level of authority, this helped us break that wall down and have that trust and build that relationship.

“So, our performance management changed. If there is a personal problem amongst the team

that is impacting the operation or if there is an ongoing challenge with an individual, we’ll ask someone from the community to facilitate a sharing circle, listen to what’s really going on, what their real struggles are.”

The report also includes plenty of information on the four pillars that Sodexo bases its Indigenous relations commitments on.

One of these pillars is creating Indigenous employment (6.5 per cent of the company’s employees are Indigenous). Another pillar is leadership, which Sodexo aspires to by raising awareness and respect for Indigenous culture and history.

The other two pillars are called Indigenous Communities and Indigenous Business Development.

The first focuses on Sodexo’s contributions to the sustainability, economic strength and quality of life in Indigenous communities. And the second is the company’s commitment to boost and develop Indigenous-owned suppliers.