Sixties Scoop: Canada is failing if reconciliation is not saying sorry twice 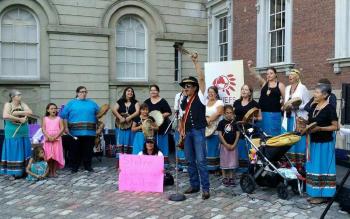 “We’ve said right from the beginning, we don’t want to be in court on these things where it’s clear that harm was done.” ~INAC Minister Carolyn Bennett

Another surprise move by the federal government

In yet another surprise move, the federal government today advised Justice Beloboba via email that they did not wish to proceed with their motion requesting an abeyance of the court’s decision regarding the Sixties Scoop class action law suit.

Just three days ago on Feb. 7, the government of Canada had sought to block the court from delivering its verdict on liability Feb. 15 in the Ontario Sixties Scoop case because they were planning a pan-Canadian settlement.

In a Feb. 10 email to Justice Belobaba, obtained by Windspeaker, the Justice Department, as represented by Barney Brucker, said, “Our proposed motion to request you grant an abeyance of your impending decision..was motivated by the prospect of a negotiated resolution of issues raised in the within action as well as other Sixties Scoop litigation before the courts.

The pan-Canadian resolution is intended to address in an integrated way matters which could not form part of any remedies granted by courts. In that sense, our purpose in seeking abeyance was not to delay justice for the Brown plaintiffs but rather to embrace broader justice for similarly-situated persons covered by all of the class members excluded from the Brown case, dependent as this case is upon a unique set of facts, laws, policies and agreements in Ontario.

“The commitment of the Government of Canada is to pursue a robust and expedited process of reconciliation for the whole of the country, with aspects touching upon a cooperative engagement of provinces as well.

“But in view of the plaintiff’s understandable desire to obtain a legal decision without further delay, we will respect their choice and will not be proceeding with a motion requesting an abeyance of your decision.”

The reply from Justice Belobaba acknowledged receipt of Canada’s request. He said he is prepared to release his decision on the case on Feb. 14, a day earlier than anticipated provided there is no objection from either side.

The Ontario Sixties Scoop claim office said it welcomed the decision on the part of the federal government.

It is certain that those Sixties Scoop survivors who were excluded from this class action lawsuit because they were taken into care off-reserve, or for other reasons, will welcome the federal government’s intent to pursue reconciliation with them.

Those who head the Ontario Sixties Scoop class action lawsuit against the federal government released an official announcement on Feb. 7 regarding a new government motion before the court.

They state that the Government of Canada, in an unprecedented legal maneuver, “sought to block the court from delivering a verdict on liability next week in the Ontario Sixties Scoop case. Canada’s request to suspend judgment comes just one week before the court is expected to deliver its decision, and eight years, almost to the day, after the case was launched.”

The class action claims that the 16,000 First Nations children taken from their families between 1965 to 1984 and placed in non-Indigenous homes suffered a profound loss of cultural identity due to the federal government’s failure to protect them.

They seek $1.3 billion in damages. The final hearing that was scheduled for Feb. 2 was cancelled at the last minute at the Crown’s request. On Jan. 30, the Department of Justice stated it had no new evidence and had no intention of cross-examining the plaintiff’s witnesses.

Ninety-five-year-old Wilmer Nadjiwon, former chief, and Howard Jones, former Band councillor, had submitted affidavits on what the government could have done to mitigate harm experienced by Sixties Scoop survivors.

According to the Sixties Scoop office, the Crown lawyers called on the presiding judge, Justice Belobaba, to throw out the testimony submitted by Chief Nadjiwon and Howard Jones, describing it as irrelevant to the case.

There are almost daily developments in this case; what the Sixties Scoop office calls “twists and turns. And they say there seems to be a disconnect between what the Indian and Northern Affairs minister is saying and what government staff are doing.

On Feb. 1, Minister Carolyn Bennett announced her government’s intention to work towards a negotiated national resolution to Sixties Scoop litigation, citing it as an important step in the country’s journey of reconciliation with Indigenous peoples.

Minister Bennett said she wanted, “to resolve these claims in a compassionate, respectful and fair manner, as a way forward towards reconciliation and healing.”

On Feb. 3, Minister Bennett was asked by Windspeaker about her stated intention to negotiate with Sixties Scoop survivors. She said, “it was certainly one of the Calls to Action of the Truth and Reconciliation Commission for us to deal with childhood litigation… When we look at the Sixties Scoop,” the Minister continued, “people lost their language and culture, so there will be negotiations around a monetary value.

“But I think what we are hearing from those people, the loss of language and culture, the fact that they’ve lost their families, they’ve lost their communities and that they can’t speak to their grandparents, that’s the kind of issues that will be dealt with in negotiations… A court can’t offer language and culture. We have a responsibility as a government to make sure that is organized.”

The minister was asked if there is an admission of wrongdoing on the part of the government; that the government neglected to ensure protection of culture and language in the case of the Ontario Sixties Scoop survivors.

“I think that’s what settling a claim is,” said Minister Bennett on Feb. 3, “that you have to admit that harm was done, and that you want to right that wrong and that’s the process we’ve begun now. We’ve said right from the beginning, we don’t want to be in court on these things where it’s clear that harm was done.”

In the Feb. 7 announcement, the Sixties Scoop claimants state that, “Canada’s lawyers are citing Minister Bennett’s recent announcement [of Feb. 1] regarding a pan-Canadian settlement as justification for this request. We fail to comprehend that reasoning. Negotiations for a pan-Canadian settlement of all Sixties Scoop claims can certainly take place concurrently or following the court’s decision on liability. Indeed, we look forward to working with the Minister and bringing forward meaningful recommendations on how to move forward together in the spirit of reconciliation.”

“The government’s actions fly in the face of the spirit,” the announcement continued. “Ontario’s Sixties Scoop survivors ought not to be re-traumatized by a government that says one thing and does another. Is it because they are First Nations people that the government believes they are not entitled to a decision from the Courts of Justice? Is this the legacy of compassion this government intends for Canadians?”

The representative plaintiff for the Ontario lawsuit, Marcia Brown Martel, was reached by phone at her home on Feb. 5. She had expressed some optimism that Canada seemed to be moving towards a change in attitude.

Dr. Raven Sinclair is a member of Gordon’s First Nation in Saskatchewan and Associate Professor of Social Work, University of Regina. Taken from her family when she was four, she was adopted by a non-Indigenous family. She was reached by phone on Feb. 4 for her reaction to the announcement that the government wanted to launch negotiations on a national basis.

Aside from monetary compensation for survivors, she feels there needs to be a healing package that will enable them to access services from Indigenous counselors and therapists.

“As an Indigenous person who was raised in a white context and that’s a part of what my trauma is,” Sinclair said, “there’s an intense irony for me to try to seek healing with a white counsellor who has no understanding of that experience.

“They aren’t trained to work with Indigenous trauma – the trauma of the loss of identity, culture, family, community and language.”

Along with access to Indigenous counselors and therapists, there is a need for land-based and residential healing programs that should include ceremony and prayer and developed jointly by Indigenous healers and survivors.

Internationally-renowned Indigenous children’s advocate Cindy Blackstock was reached via Facebook Messenger on Feb. 3 for her reaction to the government’s intent to negotiate a settlement.

“It is important that Canada demonstrates its acceptance of full responsibility for its conduct toward First Nation, Métis and Inuit children affected by the Sixties Scoop by,