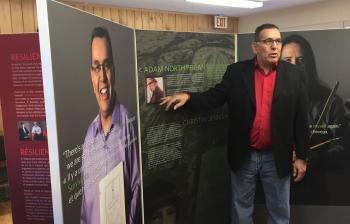 “Maybe there should have been more resources put on the table,” said Adam North Peigan of the Sixties Scoop settlement. Aug. 30 is the deadline for people to register.
By Shari Narine
Windspeaker.com Contributor

Adam North Peigan is hopeful that a portion of the $50 million that will go towards creating a foundation as part of the Sixties Scoop settlement agreement with the federal government will allow survivors to tell their stories.

“The survivors in Alberta and across Canada have a lot of concerns with that settlement agreement and that’s just one component that we’re concerned about, because it doesn’t allow the opportunity to gather and begin that healing process in our ability to be able to share our stories,” said North Peigan, president of the Sixties Scoop Indigenous Society of Alberta (SSISA).

Telling their stories is also not a part of the McLean Class Action settlement agreement struck with the federal government for students who attended Indian Day Schools, although $200 million has been set aside for a legacy fund.

“I look at these other settlement agreements that are coming in and I wonder yes, people will be happy for a quick settlement, they may be happy for not having to share their experiences and there may be some in that group that would say what’s happening to my story?” said Dan Shapiro, chief adjudicator for the Independent Assessment Program, which was part of the Indian Residential School Settlement Agreement.

The IRSSA was signed in 2008 by numerous signatories, including the federal government, five churches and two national Indigenous organizations. In that agreement, processes were established to allow residential school survivors the opportunity to tell their stories both in private and public settings.

“We heard over and over again that it was about being heard and for those people, there’s no doubt that the (IAP) hearing itself was a positive and beneficial step,” said Shapiro.

North Peigan agrees. He is hopeful that an interim board that is criss-crossing the country talking to other Sixties Scoop survivors to determine how the foundation will be structured and the services it will provide, will come to that same conclusion.

“That’s what we would like to see happen, but we’re not at that stage yet,” he said. “We think that’s something that must happen. That’s how our communities begin the healing process.”

Shapiro believes it’s essential to hold on to the history from survivors of the Sixties Scoop and Day Scholars.

“I think it would be an important part of history not to be lost and also an important acknowledgement of people’s experience, to say we need to hear from you, we need to have a record of what you say and what you’ve told us about what happened in your childhood. And that’s what I fear is being lost in other types of settlements,” he said.

To help with the history and education, SSISA has travelled across Alberta the last nine months with a special exhibit created by the Legacy of Hope Foundation in Ottawa focused on the Sixties Scoop. North Peigan’s story was one of 12 featured in the exhibit, which stopped in 11 communities.

North Peigan says most non-Indigenous Albertans had no idea that Indigenous children had been taken from their families between 1951 and 1991 and placed in non-Indigenous foster or adoptive homes or about the abuse many of them suffered in those homes.

“What we’re finding, too, our non-Native brothers and sisters that have gone to the exhibit, they’re coming out feeling very, very remorseful. They’re coming out with a better understanding and they’re actually saying that they’re sorry that this had happened in Canada,” said North Peigan.

While North Peigan wishes the Sixties Scoop settlement agreement reflected some aspects of the IRSSA, many chiefs at the recent Assembly of First Nations annual general assembly were quick to point out that the IRSSA, in particular the IAP, was also deficient.

“We acknowledge that the Independent Assessment Process has not been a perfect process. That there were a number of problems that developed over the years that required returning to the court to address certain issues,” said AFN legal counsel Stuart Wuttke.

Among issues that the court had to address were the addition of residential schools to those approved for compensation through the IRSSA; lawyers overcharging survivors on fees; the federal government withholding pertinent documentation that may have impacted financial compensation for survivors; and what would happen with IAP records.

“I would think that there’s no process that is perfect,” said Shapiro.

He points out that the finishing touches to the IRSSA were occurring on the cusp of an election. Without knowing what would happen if a new federal government came to power, the agreement was finalized.

“It’s not a perfect settlement, but that was the balance, that was the agreement that the parties struck and (the adjudicators) did our best and have done our best to make sure that people could go through the process with the health support they need, with the spiritual support they needed in a comfortable relaxed setting such as the Vancouver hearing centre and that they would be respected, whatever the legal outcome, they would be respected and acknowledged,” said Shapiro.

North Peigan agrees that no settlement is perfect.

“Maybe there should have been more resources put on the table,” he said of the Sixties Scoop settlement.

He believes the compensation is low. Depending on the number of those who register for the settlement, compensation would range from $25,000 to $50,000 per person.

Aug. 30 is the deadline for people to register.

The McLean Class Action covers students who attended Indian Day Schools that operated separate and apart from Indian residential schools. The settlement was signed with the government in March, but still has to be approved by the court. Individual compensation ranges from $10,000 to $200,000, depending on the severity of the abuse. The proposed settlement also includes a $200 million Legacy Fund to support commemoration projects, health and wellness programs, and cultural and language initiatives for communities.

There is no proposed settlement for the Gottfriedson Class Action, which was brought for those who attended Indian residential schools as day-time students and did not stay the night. Day scholars were left out of the IRSSA and were not eligible for Common Experience Payments (CEP), which saw students receive $10,000 for their first year of schooling and $3,000 for each subsequent year.

The Gottfriedson Class Action is intended to get CEP for day scholars as well as compensation for their communities because of the damage done to language and culture by the operation of residential schools.

While the AFN was signatory to the IRSSA, Wuttke said that the AFN was not involved in any of the other class actions, but was communicating with the lawyers involved in each.