Siksika celebrates the opening of new hotel and conference centre 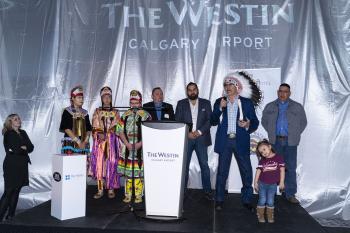 “People are coming from all over. And they’re pre-booking weddings as far as five years from now.” —Theoren Royal, SRDL’s corporate relations co-ordinator
By Sam Laskaris
Windspeaker.com Contributor
CALGARY

Officials with Siksika Resource Developments Limited (SRDL Business Group) were in a celebratory mood on Thursday Feb. 21 as they opened one of their newest properties.

SRDL oversees all economic and investment development on behalf of the Siksika Nation in Alberta.

Though it has been open for business since mid-January, Thursday marked the official grand opening of the Westin Calgary Airport Hotel and Conference Centre.

“All the photographs are reflective of Siksika Nation or Blackfoot culture,” Royal said.

Various rooms in the Calgary hotel are named after Siksika or Blackfoot geographical sites.

Numerous First Nations across the country have hotels on their own land, but having a share of various off-site hotels, including out-of-province ones, is a bit different.

Royal believes Siksika Nation residents are quite supportive of the SRDL’s hotel ventures.

“The community is behind it,” he said. “They’re excited. And they’ve come to the realization that we are thinking outside the box and forwarding ourselves.”

Many Heads and the SRDL are receiving their share of kudos for their recent work.

This past October Many Heads was named the Economic Development Officer of the Year by Cando, the national organization builds capacity in First Nations to strengthen economic development.

Besides its various hotel ventures, the SRDL is moving ahead with several other initiatives.

This includes Siksika Herbz, a company which is planning to produce medical marijuana for Health Canada. The Siksika Nation is one of the first two First Nations in the country that have been granted permits to build medical marijuana facilities on their land.

Construction on a 25,000-square foot facility is expected to begin this spring.

“We hope to begin as soon as construction season starts up,” Many Heads said. “And we hope to be up and running by 2020.”

Many Heads believes Siksika Herbz will be a lucrative initiative for his First Nation.

“We see great opportunities in the cannabis sector, as everyone does in North America,” he said.

Royal though said SRDL officials are hoping to add an education component about this venture.

“I think there’s a lot of misconceptions and misrepresentations of what we’re doing,” he said. “There’s still that kind of stigma of marijuana. But we are not opening up a dispensary here. We are growing medical marijuana and selling it to Health Canada. Once people get that across to them it will be a huge benefit for the community.”

SDRL’s other holdings, including its hotels, are also providing a boost for those Siksika Nation members looking for jobs.

“Anticipation might be the best way to describe it,” Many Heads said of those seeking employment.

The SRDL is currently providing various employment and training programs for those who might be interested in working in the hotel ventures.

“We want to engage and expand that as much as possible,” Many Heads said.

Numerous jobs were also created with the establishment of the Siksika Business Plaza. This facility began when a Petro Canada opened its doors in late 2016. The plaza now includes a grocery store and a Subway restaurant.

Five other retail bays have also been built at the plaza. Many Heads said the SDRL is currently looking for tenants for these spaces and is hoping all will be filled within 24 months.