shíshálh Nation breaks new ground on the path to reconciliation 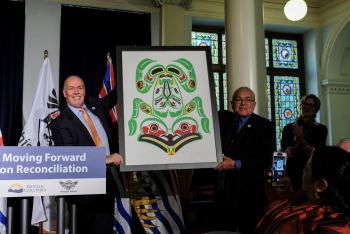 The shíshálh Nation and British Columbia have come to an agreement that recognizes Indigenous title and rights, and supports self-determination and shíshálh self-government.

The shíshálh Nation and British Columbia have come to an agreement that recognizes Indigenous title and rights, and supports self-determination and shíshálh self-government.

On Oct. 4, the parties committed to work together to protect the environment, as well as promote economic opportunity and growth for the shíshálh Nation and the Sechelt region.

The agreement will create new decision-making structures between the province and shíshálh government.

It will include land transfers of three parcels of Crown land adjacent to existing shíshálh lands to be used for economic development purposes, including gravel extraction as well as for social and cultural purposes.

A land-use planning process and joint aspirational long-term commitments will be established.

B.C. will provide $36 million to support land purchases and implementation costs. Funding for implementation and forestry initiatives will be spread over the first five years of the agreement while both parties look ahead to how the agreement might evolve to encompass other types of land and resource decisions, reads a press statement.

shíshálh Nation is located on the Sechelt Peninsula of the Sunshine Coast, 50 kilometres northwest of Vancouver.

The agreement builds on one signed in 2016 to address interests in a number of areas, including forestry, revenue sharing and shared decision making.

“Our operating aggregate mine on shíshálh lands depends on a respectful and successful relationship with the shíshálh Nation,” said Pat Heale, vice-president and general manager materials at Lehigh Hanson Materials Ltd. He congratulate the nation and the province on the agreement.

It provides clarity about how decisions are made, confirms the values and objectives that must be respected and achieved, provides investments and land transfers that will create jobs and opportunities for shíshálh and the region, said John Mohammed, president, A&A Trading Ltd.

It is the first major reconciliation agreement between the provincial government and a First Nation. It represents a new model that pushes past some of the obstacles that have been sources of delay and conflict in the past.

“Every step of the way we have sought that a proper foundation be set based on recognition of our governments, laws, and jurisdiction, a true government-to-government relationship, protection of culture and our natural environment, and real investments in economic growth,” said Chief Warren Paull of the shíshálh Nation.

“Today, that has been accomplished through a totally new type of agreement that will be to the enduring benefit of our nation, and all who live in our territory, for decades to come.”

“The people of the shíshálh Nation have led with vision and courage to make transformative change for their community,” said Premier John Horgan.

The agreement formalizes the Shared Decision Making Pilot Agreement for forestry decisions and broadens the scope to include additional forms of land and resource decisions over time.

B.C. has been working with shíshálh to actively engage industry stakeholders and local governments about the agreement.