Rights, recognition framework being raised from the dead by feds 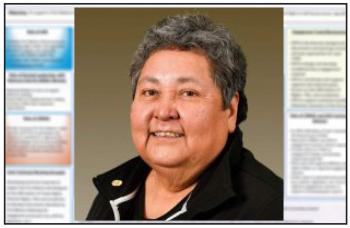 “I don’t appreciate just walking into the room and saying that I’ve been consulted when I didn’t even have the opportunity to say anything.” — Delaware First Nation Chief Denise Stonefish
By Shari Narine
Windspeaker.com Contributor

The Assembly of First Nations is calling out the federal government on an attempted end run to implement processes associated with the Rights, Recognition and Implementation Framework legislation, which was rejected by First Nations leaders in December 2018.

In a March 6 letter sent to Crown-Indigenous Relations Minister Carolyn Bennett, and copied to Prime Minister Justin Trudeau, National Chief Perry Bellegarde wrote the assembly was “concerned... with recent statements that seem to indicate timelines and outcomes are being imposed on this important work… (and) that your government expects to ‘deliver a new rights-based policy’ to replace the Inherent Rights Policy and the Comprehensive Land Claims Policy by June 2019.”

Bellegarde goes on to say that the June deadline set by the department does not provide enough time for review and discussion by chiefs.

“To preclude involvement by First Nations in general and at our (Annual General Assembly in July) would not be acceptable to myself or the Chiefs-in-Assembly,” he wrote.

That’s a stand Delaware First Nation Chief Denise Stonefish can get behind. At the December Special Chiefs Assembly, Stonefish seconded the resolution to reject the framework and associated processes.

However, that same resolution called on the AFN to hold a forum for the purpose of “establishing First Nations principles to solidify our approach with the Crown.”

To hear that Bellegarde’s letter also set out an alternative approach on Comprehensive Land Claims Policy and Inherent Rights Policy reform, which was discussed with department officials on Feb. 28, does not sit well with Stonefish.

“What First Nations need to do, we need that forum to come together to talk about how we’re going to move forward in terms of recognition of our jurisdiction,” she said.

According to an AFN internal briefing note to Bellegarde, that forum is to take place at the end of March or early May.

The alternative approach endorsed by the AFN’s Chiefs Committee on Lands, Territories and Resources is in response to a plan presented to the AFN by Joe Wild, senior assistant deputy minister for Treaties and Government.

While the tone of Bellegarde’s letter is not conciliatory even less so is an internal AFN document dated Feb. 6 that called Wild’s plan “unacceptable” and said Wild’s proposed planning committee was “merely an exercise in optics … (with) determined objectives and outcomes.”

The document states that Wild’s proposal “does provide the AFN with an opportunity to take advantage of Canada’s recent failures by proposing a path forward that both addresses the need to begin working on all four policies while also beginning a broader conversation with First Nation on Nation Building and Inherent rights.”

The AFN is proposing a timeline well beyond the June 2019 date set by Bennett’s department.  The AFN is calling for an engagement plan that would require federal funding to support local, regional and national discussions that would begin in July and conclude in 2020.

This work, it says, will provide “strong AFN mandates setting out the agenda to be pursued with the next Parliament of Canada….”

Russ Diabo, spokesperson with the Indigenous Activists Network, is opposed to Bellegarde’s response to Bennett as that response did not come from chiefs in assembly.

“The point is Bennett is still continuing with this work,” he said. “(The government is) doing this all unilaterally, bypassing the people who are the rights holders. It’s a top-down selective approach.”

Diabo references a summary document provided by Wild to the AFN. That summary document outlines agreements-in-principle with Northern Secwepemc te Qelmucw and Nishnwbe Aski Nation; and that the government has “committed to a path forward to improve and expedite treaty negotiations” with the First Nations Summit in British Columbia.

This, and other activity undertaken by Crown-Indigenous Relations in February and March, will allow the government to say they have consulted.

“I believe the federal government is manufacturing that co-development, and presenting it as such,” she said. “I don’t appreciate just walking into the room and saying that I’ve been consulted when I didn’t even have the opportunity to say anything.”

“This is typical of (the government) to try and back door this before the election,” said Diabo.

“What the feds want out of this, is they want to be able to say they fulfilled their promise of a new nation-to-nation relationship. That’s what this policy will be touted as, as a reconciliation plan going in to the election, which they’ll implement if they get elected.” 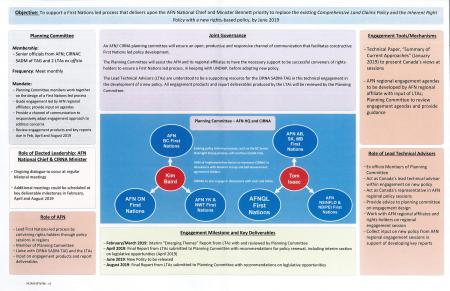 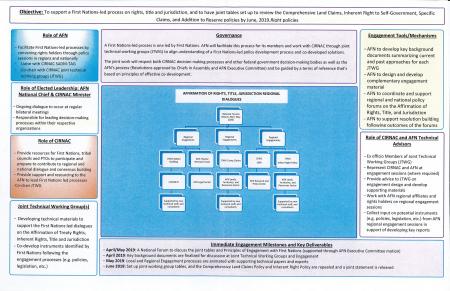