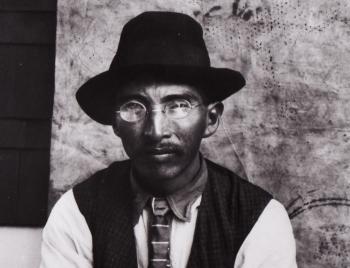 Alex Christian was the last Sinixt man allowed to hunt in Canada. Circa 1910. Photo courtesy of the National Museum of Civilization

"There is a recognition for my ancestors that are buried up there. The pit house sites, the history, my history." —Rick Desautel
By Robert Allen
Windspeaker.com Contributor

A First Nation declared extinct by Ottawa decades ago has won a long court battle to have its very existence recognised.

British Columbia’s Court of Appeal upheld Rick Desautel's right to hunt in the province even though he is an American citizen and his Sinixt people were declared extinct by the federal government in 1956.

The Sinixt, or Lakes people, say they were pushed from Canada by miners and settlers.

Almost a decade ago Desautel travelled to B.C. from Washington State to shoot an elk. He alerted B.C. Conservation officers to what he had done. He was charged under the Wildlife Act with hunting without a license and being a non resident hunter.

Desautel was acquitted of those charges twice, but the B.C. government appealed.

Now the Court of Appeal has sided with Desautel as well.

"Imposing a requirement that Indigenous peoples may only hold Aboriginal rights in Canada if they occupy the same geographical area in which their ancestors exercised those rights, ignores the Aboriginal perspective, the realities of colonisation and does little towards achieving the ultimate goal of reconciliation.

“In this case, such a requirement would extinguish Mr. Desautel’s right to hunt in the traditional territory of his ancestors even though the rights of his community were never voluntarily surrendered, abandoned or extinguished," the Appeal Court ruled.

Desautel, 68, lives on the Colville Reservation, south of the Canada-U.S. border and is a retired Conservation officer.

He considers the ruling another step toward erasing Canadian 'extinction' for his people.

"There is a recognition for my ancestors that are buried up there. The pit house sites, the history, my history," he says.

Desautel's lawyer, Mark Underhill says the ruling pushes back against the notion that borders and displacement can erase rights.

"To my knowledge there has not been a case like this when you are literally fighting about your existence," said Underhill.  "It's an astonishing thing if you take a step back from it. But that is what this case was about."

Underhill said the province can now try to have the case heard by the Supreme Court of Canada or begin the process of reconciliation with the Sinixt.

"We'll be pressing the government to stop the litigation and to focus on, as the courts have repeatedly said, including in this decision, the process of reconciliation."

There are believed to be about 3,000 people of Sinixt ancestry living in the U.S. An unknown number joined other First Nations in southern British Columbia.

The Sinixt traditional territory takes in much of the West Kootenay region, stretching from Washington State to Revelstoke, B.C.

The BC government is reviewing the ruling.