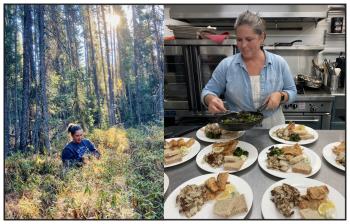 Chef Jenni Lessard (Métis) will be serving up stories and her greatest recipe hits at the National Arts Centre in Ottawa September through November.

“I consider a lot of these ingredients to be pretty sacred; and food waste is a big issue to me. The whole team was really open to my vision and my values.” — Chef Jenni Lessard
By Crystal St.Pierre
Local Journalism Initiative Reporter
Windspeaker.com

The National Arts Centre’s (NAC) resident chef, Jenni Lessard, is bringing the stories of her childhood blended with some of her family’s traditional recipes to the table during her time at the centre this fall.

“When we bring them here, it’s not just to bring a chef and create a promotion and buy some wines and do food around them It’s to tell stories. That’s what I love and why I love the program,” said Nelson Borges, general manager of food and beverage at NAC.

“Jenni is going to be awesome at that. I just know it.”

For the past three years NAC has invited an Indigenous chef to take up residency at the facilities of 1 Elgin Restaurant for the months of September through November. In total there are five different resident chefs throughout the year, but NAC reaches out to Indigenous chefs to fill the space for the fall as it coincides with the National Day for Truth and Reconciliation Sept. 30, Borges explained.

This year, a decision was made to only have female chef residencies.

Lessard, a Métis chef from Saskatchewan, comes highly recommended to NAC through her colleagues.

“She had an interesting story and she was referred highly to us… She’s fascinating,” Borges said.

Lessard humbly accepted the position when offered and said she is still in awe of where her passion for cooking has led her.

“From me experimenting with blueberries and stuff in my kitchen in the north and, you know, wearing one of my mom’s white blouses to pretend it was a chef’s coat, to presenting this food at the National Arts Centre is amazing,” she said.

“I always tell students that I’m working with, what you were excited about when you were a little guy or a little girl, it’s probably what your passion is and what you are going to be really good at until the end of your days. It’s your calling.”

Lessard said “dreams can take you in really crazy places.”

Although the kitchen has changed since she was a child and her techniques have progressed, the stories that inspire her and the recipes have remained the same.

“There’s story in every single dish that I have presented… I want to connect people with the ingredients,” she said.

It was in her early teen years that she realized she could combine her love of cooking with making a living.

In Grade 9 she rented a trailer from the friendship centre and, along with a few of her friends, they started selling burgers, chips and pop.

“I was like ‘oooh, people pay for food. This is great. I love to cook,” she joked.

From there Lessard worked at various cooking-related careers, including owning her own restaurant in Birch Hill, Sask. It became one of the most valuable restaurants in the vicinity and offered customers a taste of home.

“I kind of feel like this thing at the National Arts Centre is kind of like an overview of all the catering I’ve done for so many different people and the meals I served at my restaurant. It’s kind of the best, the greatest hits, of those recipes.”

Of the 25 recipes she has used during her NAC residency, many of them are ones handed down from her grandmother, mother and auntie. Of course, she has made them her own with ingredients and flavouring, but the basics all come from her ancestors.

In particular, one of her favorite recipes was created from one of her fondest memories as a child.

“When I was a little girl… we would travel and visit our friends on the trapline… She (her grandmother) would serve me tea. Even though I was little, I was allowed to drink the tea. It was always, of course, Red Rose tea. So, the ice cream that goes with my grandma’s date square on the menu at NAC is a Red Rose tea ice cream,” she said. “Which may not have a lot of meaning to people that didn’t grow up having tea with their grandma like that, but for me it’s quite meaningful and it’s really delicious.”

Another is the whole wheat bannock recipe that her aunt had given her years ago when she owned her own business.

“My bannock is now at the National Arts Centre in Ottawa, and my aunt has passed but she would be just tickled pink that that had happened,” Lessard said.

She is also careful about the ingredients she uses in her cuisine and wants to maintain the integrity of those ingredients. There are a lot of berries, bison, duck, rabbit and lentils used, as well as teas and spices.

“I consider a lot of these ingredients to be pretty sacred, and food waste is a big issue to me. The whole team was really open to my vision and my values. I was a little worried because a lot of the recipes that I was taught by my community, by my grandma and my mom, they are very specific to here (Saskatchewan),” she said.

“So much of our cuisine is land-based. It was really important to me to find out ‘are you going to let me give you the list of my suppliers so you can get Labrador tea that’s harvested using proper protocols in northern Saskatchewan? Can I pick some choke cherries and send them to you? Can I get bison liver for the paté and send that to you?’ And they were open to all of that. So that was really why I agreed to do it. It wasn’t just them taking rough ideas and getting all the ingredients from down there.”

Lessard said NAC was accommodating and did use the suppliers she recommended for bulk items they would require.

“It was really important to me to bring some of the ingredients from some of the producers from Saskatchewan, especially the Indigenous producers,” she added.

From Sept. 27 to Sept. 29 Lessard will be at NAC to participate in sharing the stories behind her recipes during a number of public engagements. She will also be hosting a culinary event which will pair the cuisine with complimenting wines.

Lessard said she is excited and a bit nervous about the time she will be spending at NAC but mostly excited.

“I’ve always wanted to tell a story with the food. I don’t know why. It just seems to be something I feel like I need to do. I’ve been told by people that eat the food that it does enhance the experience by hearing the story of the food. Whether it’s my story or the ingredients or the producers, and I love being that bridge.”