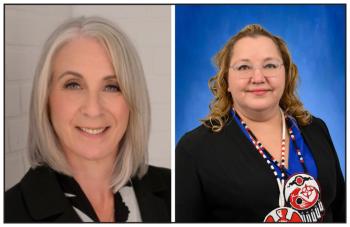 “The AFN will also seek judicial review to ensure the rights of our children and families are fully respected in this process and that they receive the compensation that’s due to them.” — Manitoba Regional Chief Cindy Woodhouse
By Shari Narine
Local Journalism Initiative Reporter
Windspeaker.com

The Assembly of First Nations (AFN) and the federal government are seeking a judicial review of the decision from the Canadian Human Rights Tribunal (CHRT) to reject a $20 billion compensation package for First Nations children discriminated against in the child welfare system on reserve.

The CHRT ruled Oct. 24 that a final settlement agreement, although “outstanding in many ways,” still fell short in meeting the orders set out by the panel.

After six months of intense negotiations between the federal government and the AFN, compensation was allotted for children and families who were discriminated against through the underfunding of the First Nations Child and Family Services program and by the federal government’s narrow interpretation of Jordan’s Principle.

However, the agreement did not include two other groups identified by the CHRT: children and youth in placements that were not funded by Indigenous Services Canada (ISC) and the estates of deceased parents.

The panel also noted that “no meaningful steps” were taken by either the AFN or Canada to inform the public, the victims or their families that the final settlement agreement saw a group of people losing entitlement to compensation.

“The AFN will also seek judicial review to ensure the rights of our children and families are fully respected in this process and that they receive the compensation that’s due to them,” said Manitoba Regional Chief Cindy Woodhouse, addressing the media yesterday.

Woodhouse, who led the negotiations on behalf of the AFN, said it was impossible to tell how long this next legal phase would take as they had yet to receive the CHRT’s full explanation for its reasoning.

However, to comply with legal requirements, application for a judicial review had to be made within 30 days of the CHRT decision being delivered.

“It could be a quicker resolution or it could be tied up in the courts. Depending on the decision and how the different parties respond to it, I know that, if we keep the best interest of the kids the focus, that’s the focus of this, to get them compensated, and I think we can all agree on that, hopefully it goes quickly,” said Woodhouse.

There are 300,000 people, she said, that are eligible for compensation.

Woodhouse got emotional when she talked about the children she grew up with on reserve who had been separated from their families and how now they would need to wait even longer for compensation.

“Thinking about how they would feel, we have to try to find a resolve for this as quickly as possible and…don’t play politics with people,” she said.

The federal government said in a statement issued yesterday that a judicial review would not impede ongoing work in determining how to distribute compensation to children and families covered in the existing agreement.

She stressed that the settlement had been Indigenous led as had been the compensation regime and so she found it difficult to understand the CHRT’s decision not to accept the settlement.

“So that’s one of the questions,” she said.

Hajdu would not commit to adding more money to a settlement that was already a “historic sum” but said, “We are always open to looking with partners at how we satisfy those other categories of individuals.”

Hajdu said that Dr. Cindy Blackstock, executive director of the First Nations Child and Family Caring Society, would be “very helpful” with her expertise and knowledge in working to reform the system.

Blackstock had opposed the final settlement agreement saying children had been cut out.

The AFN and the Caring Society were partners in 2007 when they filed a human rights complaint against the federal government. That action got the ball rolling on the final settlement agreement.

However, Blackstock did not join the AFN in negotiating the final settlement agreement, which was announced in January.