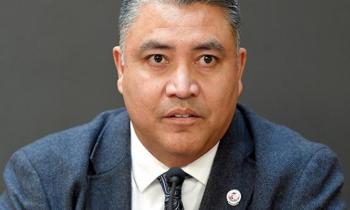 “I want to continue to develop First Nations strategy in climate change. Climate change is probably going to be our most pressing issue the next 50 to 100 years. It would be our defining moment at least for our generation.” — Terry Teegee
By Shari Narine
Local Journalism Initiative Reporter
Windspeaker.com

Terry Teegee would like to represent British Columbia for a second three-year term as regional chief with the Assembly of First Nations.

He wants to continue to push the BC First Nations agenda, both at the national and regional levels.

“It will serve us well in this country if we're all proactive and lobbying our government or senators to make sure that legislation is meeting the criteria” of the United Nations Declaration on the Rights of Indigenous Peoples, said Teegee.

Since his election as regional chief in 2017, Teegee counts as his top accomplishments his work helping develop a variety of legislation, including federal bill C-92, an Act respecting First Nations, Inuit and Métis children, youth and families, and the BC government’s implementation of the Declaration on the Rights of Indigenous Peoples Act.

And he’s given voice to combat racism, with his most recent work as the co-chair of the AFN’s national fisheries council. Violent clashes erupted in October with non-Indigenous fishers interrupting the exercise of the Mi’kmaw fishers’ right to a commercial lobster fishery.

In late October, a rally in Vancouver drew hundreds in support of the Mi’kmaw lobster fishery, and added voices to the call for RCMP Commissioner Brenda Lucki’s resignation. Earlier this year, Lucki came under fire for saying she was “struggling” with the definition of systemic racism, and then more recently when RCMP officers failed to take action to protect Mi’kmaw fishers.

Should he win re-election, Teegee says he will continue to be proactive to ensure the federal government commits to implementing UNDRIP in all legislation. He is facing challenger Cheryl Casimer in BCAFN’s first online election. Chiefs and proxies will have from 6 p.m. on Nov. 17 to 11 a.m. on Nov. 18 to mark their ballots.

“We need to stay ahead of the curve and be ready. (That’s) what we've learned here in BC, that we need to have an action plan on how the declaration shows up in federal legislation,” he said.

At the provincial level, he has set his sights on education in terms of the development of curriculum “that really respects and understands the local First Nations, especially in the public school system.” He wants to see such curricula made mandatory.

“I think for children to be successful we should have more autonomy in terms of how funding is controlled. I think there’s good local education agreements, but there are also a lot of bad ones. That would be a high priority,” he said.

His third priority also ties in with education: the need for “fundamental change in society.”

“One of the biggest issues we’ve seen through this pandemic is not only proper resourcing for First Nations in terms of coming out of the pandemic. We need to be at those tables when our First Nations come out of this.

“We’ve seen a lot of detrimental issues with the economy. We’ve also seen lot of issues with racism. I think education is a big part of that. That’s why I want to push towards education. That’s just one institution. We need to look at all institutions—policing, health care. First Nations and minorities are always dealing with (racism). It’s systemic,” he said.

Teegee says the 90 calls to action from the Truth and Reconciliation Commission’s final report in 2015 have brought about some changes, but not enough.

He also calls on all levels of government, including municipal, plus organizations to adopt the 231 calls for justice that came from the National Inquiry into Murdered and Missing Indigenous Women and Girls, released in 2019.

“I think governments, including Horgan, would serve them well to really have a look at themselves and also develop a plan to deal with racism. First Nations, Indigenous people and minorities need to be front and centre in developing that plan,” he said.

“I want to continue to develop First Nations strategy in climate change. Climate change is probably going to be our most pressing issue the next 50 to 100 years. It would be our defining moment at least for our generation. We’re doing something about it, raising those issues to the highest level,” he said.

As for keeping BC First Nations issues alive on the national front, Teegee says that’s where having a strong voice on the AFN executive council is important. He is not as critical as some of his counterparts when it comes to the job National Chief Perry Bellegarde is undertaking.

“You do have to have a diplomatic relationship with whatever government is in power, but at the same time, you do have to take a stand on some of these issues and I think it’s a fine line. I don’t think you’re going to please all the leaders out there, but at the same time you have to be cautious too. You can’t get too cozy with whatever government is in there because ultimately you have to live up to really respecting First Nations and respecting our rights for self determination,” he said.

“Fundamentally we need to understand, that as First Nations, there’s a colonial government regardless of what party is in power and we have to take a strong stand with some of these issues. (The Liberal government) has definitely committed to some legislation. There’s some positives over the last several years with legislation on languages, child welfare, implementation of UNDRIP by the end of the year as legislation. I know certainly we wouldn’t be there if it was a Conservative government. Perhaps maybe we could have gone further with the NDP, I don’t know,” said Teegee.

Teegee is of Dakelh (Carrier), Gitxsan and Sekani descent and he is a member of the Takla Nation.