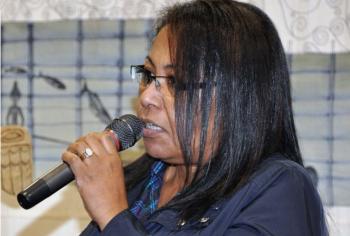 “We don’t want federal (UNDRIP) legislation to impede the work that we’re doing in BC. Plus, we want to be able to bring our experience to the federal table to help draft and shape what that legislation would look like.” — Cheryl Casimer
By Shari Narine
Local Journalism Initiative Reporter
Windspeaker.com

Cheryl Casimer isn’t being “critical or anything,” but she believes it’s time for another woman regional chief on the Assembly of First Nations executive committee, so she’s running for the position of regional chief of the British Columbia AFN.

Casimer also thinks it’s important to hold AFN National Chief Perry Bellegarde accountable. She says he appears to be following his own agenda. He’s far too accommodating toward the Trudeau government, she says.

And she’s not alone in that feeling if social media posts that refer to Bellegarde as “Pipeline Perry” or “Sellout Perry” are any indication.

“When (Bellegarde) makes a statement on some (federal government) initiative, the (social media) comments are horrible and they're coming from First Nations people,” said Casimer.  “I often question the reasoning for coming out with a supportive statement. Why would you do that at this point? I think you need to be challenging the Liberals a lot more.”

Casimer also wants to improve the communication between the national AFN and regional body.

Among her accomplishments, Casimer counts her work on Bill 41, the Declaration on the Rights of Indigenous Peoples Act (DRIPA), passed in the BC Legislature late in 2019; the federal bill C-92, an Act respecting First Nations, Inuit and Métis children, youth and families; and loan forgiveness for treaty negotiations. These are three files that Casimer was either lead on or helped with.

As for her top three priorities should she become the new regional chief for BC, her first is related to lands and resources.

Casimer acknowledges that not every First Nation is involved in treaty negotiations. For those who aren’t, she says it’s a matter of putting together tools and resources to allow them to address their rights and title.

She also says it’s important that First Nations support each other when it comes to benefit sharing agreements with the province instead of disputing which First Nation has ownership of the land in question. Instead of going to court, she says, nations need to work out shared territories.

“As long as we have those divisions amongst us we're never going to be able to be in a strong position to be decision-makers about our lands,” she said.

Casimer’s second priority is to carry on with the work already underway by the BCAFN.

“I'm not thinking about coming in and scrapping everything that's already happened. I know that's happened in some instances, but I'm not interested in doing that. A lot of energy and time and resourcing has gone into it (including) economic development that's been mandated by the chiefs and I will continue to work on that,” she said.

Strong economies and strong government structures are critical for First Nations to make decisions about land and resources, she says.

Her third priority centres on the United Nations Declaration on the Rights of Indigenous People (UNDRIP) at both the federal and provincial levels.

She said BC chiefs told federal Justice Minister and Attorney General David Lametti that if he was going to move forward with UNDRIP legislation to “make sure you create space for BC at the table.

“We don’t want federal legislation to impede the work that we’re doing in BC. Plus, we want to be able to bring our experience to the federal table to help draft and shape what that legislation would look like,” said Casimer.

Casimer believes that First Nations have a “positive relationship for the most part” with newly re-elected Premier John Horgan. She references both DRIPA and a gaming revenues agreement that came into place under the NDP-Green coalition government.

Horgan has met with First Nations leadership on a regular basis, she says, and he has been available “for the most part” to discuss “hot issues.”

Casimer says she plans to keep First Nations issues on Horgan’s agenda by being “in his face all the time. You have to be.”

As for staying on the radar with the Trudeau government, Casimer says that’s an important role for the BC regional chief to undertake within the AFN.

“(BC First Nations have) worked really hard on being collective on our issues, especially when we go to the AFN meeting.  We've always been so well prepared that we are always able to influence what's happening nationally. I want to keep on building off of that momentum,” she said.

Casimer thinks the next three years for BC First Nations will be important, particularly in the face of the coronavirus pandemic, which could be in play for the foreseeable future.

“It's going to be important and critical for the regional chief to think, to be innovative and creative in how you're going to lead. My first couple of years will be predominately virtual work with chiefs. How do we continue to advance these issues that are critical to us through that virtual world? That will be a challenge. I'm always up for a good challenge though,” said Casimer.

Casimer is a citizen of the Ktunaxa Nation and is from the community of ʔaq̓am.