Ratification vote for MNA constitution to go ahead this fall despite criticisms of process, content 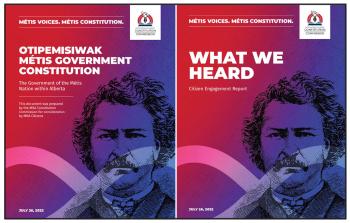 The 21-page Métis Nation of Alberta constitution booklet and accompanying “What We Heard” document is now online.

“I would argue that less than two per cent of our membership being consulted and offering their suggestions and feedback on a document that is going to impact us for years to come is not adequate.” — Melanie Moreau of Region 3 (Calgary)
By Shari Narine
Local Journalism Initiative Reporter
Windspeaker.com

Métis Nation of Alberta members 16 years of age and older can vote this fall online and by mail on the third and final draft of the Otipemisiwak Métis Government Constitution.

On Saturday, the last day of the MNA’s three-day annual general assembly, discussion was split on whether to move forward on a ratification vote on a constitution many in attendance felt was lacking in both substance and consultation.

However, despite that vocal dissension, the resolution to hold the ratification vote passed with a show of hands. However, the chair did not call for abstentions as part of the voting process.

The posting of the 21-page constitution booklet and accompanying “What We Heard” document—10 days before the start of the AGA in Calgary—was raised as one of many concerns.

It was pointed out that members didn’t know that the documents had been posted on the MNA website nor did they know that their feedback at the AGA would not impact the constitution document that went forward for ratification.

“This is supposedly our most important document for the nation and…we’re rushing it through. I feel there’s so many questions still that need to be answered,” said the first member to step to the microphone when the floor was opened for discussion on the ordinary resolution calling for a fall ratification of the constitution.

That resolution, moved by Lisa Weber and Karen Collins, both members of the Constitution Commission, calls for the constitution to be ratified with a simple majority vote of 50 per cent plus one of those who cast ballots.

Ratifying the constitution would be one step in moving the MNA out of Alberta’s Societies Act, where the MNA operates as an association. The resolution calls for Canada to introduce implementation legislation by the end of 2022 which would see the federal government recognize the inherent right to self-government of the Métis Nation within Alberta.

The resolution also sets out that the next general election in 2023, which was postponed from this September, to be held “under the self government authority of the constitution, if it is ultimately approved.” The motion doesn’t say what will happen to that election if the constitution is not ratified.

The first speaker also questioned the aspects of governance the constitution did not address a transition plan, enabling laws, and a fiscal financial agreement.

“We’re agreeing to a constitution that is not clarifying any of these other bigger pieces that are going to have a huge impact on the communities. And I don’t want to hear ‘out of scope’ (to my questions). I want to have real discussions about this,” she said.

“The (laws) would be ultimately approved by the provincial council, which is our governing body,” said Inkster.

MNA President Audrey Poitras, who chairs the Constitution Commission and is also on the transition committee and working on a fiscal arrangement with the federal government, said “there are certain things we can’t do until there is a structure to do it with.”

She added that structure was determined by the constitution.

Melanie Moreau of Region 3 (Calgary) questioned the consultation process that went into producing the draft constitution. She said according to the citizen engagement report, 19 engagements resulted in input from 589 members. She pointed out that there are 53,000 MNA members in the province.

“I would argue that less than two per cent of our membership being consulted and offering their suggestions and feedback on a document that is going to impact us for years to come is not adequate,” said Moreau.

While it is unclear as to how many of those 53,000 are of voting age, numbers of those involved in important decisions for the MNA have been low.

In a special meeting in June that resulted in the vote that delayed this year’s general election, only 199 members participated. For this AGA, on the morning of Aug. 6, the count for those in attendance sat at 409.

Dr. Tracy Friedel, president of Region 4 (Edmonton and west), said the lack of meaningful consultation on the constitution could result in legal action, as well as more Métis regions leaving the MNA. Many of the northeastern Métis associations have withdrawn from the MNA.

Friedel also drew comparisons to the United Nations Declaration on the Rights of Indigenous Peoples (UNDRIP) and the need for free, prior and informed consent.

“These processes that were followed here doesn’t in anyway align with those articles (in UNDRIP) either. Increasingly the federal government is working with Indigenous folk to co-develop. Co-develop policy, co-develop a number of different things. The process here is anything but co-development. It’s happened largely behind the scenes, largely without the awareness of folks,” said Friedel.

Dr. Adam Browning, president of the Lethbridge local, said his council had not been meaningfully engaged and no engagement sessions were held in Lethbridge, so “let’s vote this down.”

However, Aaron Barner, MNA Senior Executive Officer, took to the microphone to say those who spoke against the motion, singling out “some of the people who proclaim to be the most educated people in the room,” didn’t understand the resolution.

He attributed the lack of support for the resolution as “fear of the unknown.”

“The resolution today is about putting this to a vote to all 50,000 plus members. It says right in the resolution, it’s going to get mailed to those individuals. The proponents that said today, ‘We didn’t have enough engagement, not enough people got involved’ … Well, that’s the members’ fault. They need to get involved. They need to get off their couch and get involved. But bringing this to a vote is going to bring this to 50,000 members instead of just the assembly here… to say yes or no,” said Sutherland.

In a related matter, Browning and Jeannette Hansen, president of the Medicine Hat Métis local, had put forward a special resolution that called for overturning the June 4 special meeting decision to delay the 2022 general election for one year.

However, the resolution did not make it onto the floor for a vote.

Chantal Sparkling Eyes, chair of the special resolution committee, said the committee met with a lawyer and collectively decided that the resolution had already been dealt with by Métis Judiciary Council “and so it is not our position where we can undermine that authority.” The MJC had ruled that the June 4 special meeting, although it did not meet the 21-day notice, was still allowed by the bylaws.

Over the next few months, the Constitution Commission will host information sessions to present the draft constitution. The MNA will also undertake a province-wide information campaign to ensure that all its citizens are aware of the ratification vote.