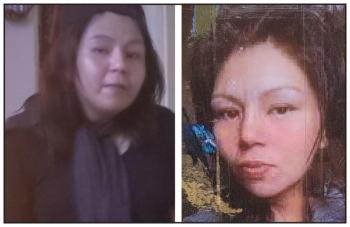 “Nighttime is the worst because you think everything. I think too much at nighttime.” — Jessica Alexis
By Shari Narine
Local Journalism Initiative Reporter
Windspeaker.com

Tomorrow that search will be combined with the community’s monthly rally against alcohol and drugs. That rally was begun last year by Angela’s cousin and godmother Jessica Alexis. It’s held the last Saturday of every month.

Chief and council have been invited, says Jessica.

“Community safety is an issue here. The alcohol and drugs are an issue,” Jessica said, as the reason why she began that rally in December 2021. The starting point of the rally rotates between the different entrances to the reserve.

Substance abuse has also played a role in Angela’s life, particularly after a house fire that claimed the lives of her three children, mother and stepfather in December 2019. 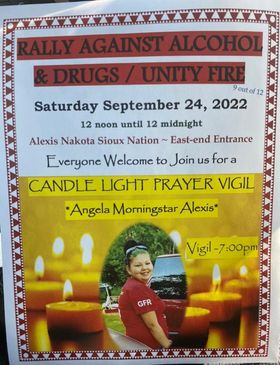 Community members are being asked to come out at 9 a.m. Saturday morning to the east end of the reserve on Range Road 35A. A tipi and unity fire will be set up there. Searching will begin at 10 a.m. and continue all day. After supper, a prayer and candlelight vigil will be held for Angela at 7 p.m.

Jessica says six or seven family members are still meeting at her aunt’s home every morning, smudging and praying and then going to a location on the reserve to ground search for Angela.

Rumours are still spreading as to Angela’s whereabouts and Jessica says they continue to search those areas. No clues or signs of Angela have turned up.

Today, the family is getting help from the canine unit from the volunteer Canadian Search and Disaster Dogs Association.

Jessica says a member of the group contacted her after getting her phone number from an initial missing poster for Angela. Those posters now have the RCMP Crimestoppers phone number on them and Mayerthorpe detachment number.

Windspeaker.com reached out to the RCMP’s K-Division for an update but did not hear back by deadline.

Earlier this week a group of ex-military walked out to the reserve to help search. Jessica said her uncle had a friend who knew them and contacted the group.

The community continues to support the search, she says, with food and equipment.

“I’m on autopilot everyday. Nighttime is the worst because you think everything. I think too much at nighttime. It’s hard to sleep because I don’t know what to do anymore,” she said.

Yet Jessica says she remains hopeful her cousin will be found.

Jessica says the community is offering up an undisclosed “substantial” cash reward for any information that leads to Angela’s whereabouts.