‘Profit’ not a dirty word in Indigenous Relations budget, but ‘Green’ seems to be 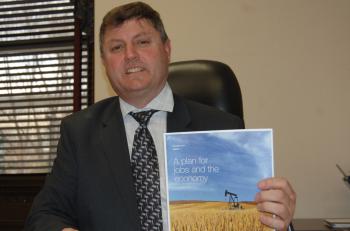 The United Conservative Party government insists it's not driving the agenda for Indigenous peoples in Alberta with its first budget delivered last week, but one grand chief doesn't see it that way.

“It stopped a lot of the stuff the NDP was doing—opportunities,” said Treaty 8 Grand Chief Arthur Noskey.

The UCP Indigenous Relations budget marks a stark change in direction from the one charted by the previous NDP government, with funding lost for green energy initiatives and replaced by increased funding for resource development.

“100% gone. A program that was accessed by all 48 First Nations and all 8 Metis Settlements. It was a clear reflection of Indigenous values on the environment and now its (sic) completely gone.” Feehan served as Indigenous Relations minister in the former government.

In an interview with Windspeaker.com, Indigenous Relations Minister Rick Wilson said the programs were eliminated as a result of an election promise made by Premier Jason Kenney to scrap the carbon tax.

“Climate leadership was based on the job-killing carbon tax. Once the carbon tax was gone that portion (of matching funding from the federal government) was gone as well,” said Wilson.

He said his department’s budget was “only basically down on the climate change stuff. Other than that our budget is actually up a little bit.”

The department has lost $57 million in climate change initiatives funding.

The cuts prompted Feehan to tweet, “On the surface it’s a 19% reduction to Indigenous relations. But in reality, because 50% of the budget is flow through money – not government money, the actual cut is 36% to services to Indigenous people.”

The UCP budget sees $6 million committed in each of the next four years for the Alberta Indigenous Opportunities Corporation, another Kenney-election promise. That money will be used to provide technical advice, develop business plans and build capacity to Indigenous-owned or Indigenous-partnered projects in the energy sector.

Noskey says the UCP-created Alberta Indigenous Opportunities Corporation (AIOC) is going to be for any and all First Nations who want to start a business “as long as it’s in the oil and gas sector.”

But in an interview with Windspeaker Radio, Minister Wilson said that’s not the case.

The fund is for energy-related projects that are viable businesses, so energy-related could mean “oil and gas, forestry. It could be mining. And it could be renewables too,” Wilson told morning host Jeremy Harpe. “It just has to be business-viable type projects.”

Projects will go before the AIOC’s board to seek approval. The board has yet to be established. That board, which will also choose the CEO and will be a “competency board,” will operate at arms-length from the ministry. While the bill establishing the AIOC didn’t set out the number of Indigenous board members, Wilson said, “I can guarantee you the board is going to be mostly Indigenous. We’ve got some great people.”

The AOIC will also provide $1 billion to backstop loans. That figure does not appear in the budget.

“(It) won’t show in the budget unless a company were to fail. At that point it would show,” said Wilson. “I could go to Cabinet to get other things to make it an actual loan. If it becomes an actual loan, then it becomes a budget item.”

Also not showing in the budget is any projected revenue through taxes or royalty payments that could come to the province from successful AIOC-approved businesses.

Wilson said there was no revenue stream because the program is to help Indigenous communities pay for their own services and social programming on reserve and on Metis settlements.

“We want them to make money in this. Profit isn’t a dirty word,” he said.

Wilson wasn’t clear on whether the provincial government would also realize some of that profit.

“We don’t know what type of projects are going to come through the door at this point,” he said.

Another budget line for the Indigenous Relations department is $5 million in each of the next two fiscal years for an Indigenous Litigation fund. That money is only available to Indigenous people or groups who are working to “advance Alberta’s interests,” according to the budget, which Wilson said means “making life better for all Albertans… It’s subjective, but it’s all subjective.”

Indigenous groups fighting oil or gas development in their territory will not get help through the litigation fund, he added.

Noskey believes that this government has missed the point when it comes to development on Indigenous lands.

“Under the stuff that’s lost here is the lack of consideration of consultation with First Nations on infringement of rights. A prime example is (the Trans Mountain Pipeline expansion). TMX hit the wall. Why? It’s not because there’s people out there or groups that want to stop pipeline development. It’s because of lack of consultation with First Nations on the infringement of their rights. If a First Nation is going to lose prime habitat for hunting or fishing, then based on the environment damage going through there, what is the compensation? And that’s what the (provincial and federal) governments are not addressing,” he said.

“We have a government that (doesn’t) care about what they leave behind, but what they can benefit from. That’s all I see.”

The UCP’s budget, “A plan for jobs and the economy,” delivered on Kenney’s promise for dialing back expenditures with $1.3 billion in spending cuts and balancing the budget in four years.