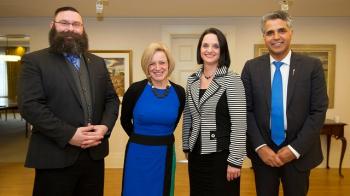 It’s not the creation of a children’s services ministry, or the formation of a child intervention panel, that will make the difference in the lives of young people, but what they do that will have an impact.

Human Services was renamed Community and Social Services and will remain under Minister Irfan Sabir.

“The fact that there has been a structural change in the creation of a new ministry that’s focused on child protection and child welfare that, in and of itself, is not going to change the system, but depending on what happens within that new ministry, certainly significant changes could take place,” said Child and Youth Advocate Del Graff.

Graff is familiar with Larivee, who was co-chair of the mental health committee. He took a group of young people to speak in front of that committee.

“I was really encouraged by (Larivee’s) approach to those young people and I could see that she was listening quite intensely. So my experience with her both through that and the couple other times we met was encouraging,” he said.

Sabir has announced a 13-member ministerial panel on child intervention. All opposition parties have a representative on the panel despite threats to boycott because of early dissatisfaction with the terms of reference.

“The fact there is a panel is one thing but … how effective they are is going to be dependent upon what they actually do,” said Graff.

Both bodies were created as a result of the fall out before Christmas over the death of four-year-old Serenity, an Indigenous child who had been in kinship care. The Office of the Child and Youth Advocate delivered its report (in which the girl was referred to as “Marie”) in November stating that the child had died while in care of her private guardians and the police investigation was ongoing.

However, journalist Paula Simons discovered that the correct documentation had not been filed by Alberta Human Services and the RCMP was not investigating. Simons also discovered that Serenity had been abused sexually.

The initial focus of the panel will be to improve the child death review process.

To that end, Graff is encouraged by Dr. Peter Choate’s inclusion on the panel as he has “outstanding expertise” in reviewing child death reviews.

However, says Graff, the panel, with 10 MLAs and three experts, is lacking in Indigenous membership. Only Patti Laboucane-Benson, with Native Counselling Services of Alberta, is Indigenous.

Graff says the panel would benefit from greater Indigenous involvement and is hopeful it will “reach out” to Indigenous people as well as young people, both in and out of the system.

Graff encourages active community involvement as the panel, according to the terms of reference, will hold meetings “in public and on the record except when the panel decides a session should be held in private.”

“When communities and stakeholders participate it can’t help but produce a better outcome,” he said.

The panel is also tasked with reviewing existing reports and recommendations, and examining a number of issues, including root causes that lead to children and families becoming involved in the system.

“I recognize, as do people who’ve been in this field, that there’s very little new that’s been put on the table in terms of what we can say about the issues. But what we can do differently is act,” said Graff.

“I recognize that the work is very difficult and the task this panel has been given is challenging. My hope is that the resulting action that comes from the process will in fact move forward a system that better serves young people and I have to remain optimistic that when people try their best to come together and address a specific issue that there are ways that can be found to make progress on those issues,” he said.

Graff says his office will contribute in whatever way it can to move the process forward.