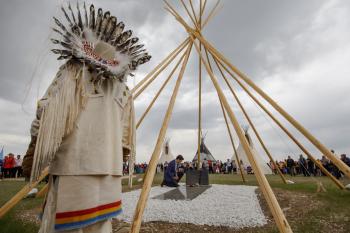 Prime Minister Justin Trudeau kneels at the grave of Chief Poundmaker after placing tobacco. (Photo from the PM's Twitter page.)

“You have always known that your chief deserved to be respected and celebrated, but now all Canadians will have the opportunity to learn and understand the true history and legacy of Chief Poundmaker.” —Prime Minister Justin Trudeau
By Shari Narine
Winspeaker.com Contributor

“Without reservation.” That was how Prime Minister Justin Trudeau exonerated Chief Poundmaker of the crimes he was charged with 134 years ago. The Prime Minister offered his government’s and the Canadian peoples’ apology to the Poundmaker Cree Nation in a special ceremony May 23.

Trudeau delivered his heartfelt words in a 20-minute address at the Cut Knife Creek battle site where Poundmaker’s actions on May 2, 1885, were wrongly told and led to his conviction of treason-felony in the aftermath of the Riel Rebellion, or "resistance" as Trudeau reframed that significant part of Canadian history.

Poundmaker (Pîhtokahanapiwiyin) served seven months at the Stony Mountain penitentiary in Manitoba. He was released after contracting a respiratory disease while in jail. He died in 1886 at age 44. Trudeau corrected history stating Poundmaker was instead a peacemaker and his actions that day, allowing government forces to retreat from the site and stopping warriors from pursuit, prevented bloodshed.

“The Poundmaker Cree Nation has long advocated to hear these words from the government of Canada and it is your dedicated efforts that have brought us here today to honour Chief Poundmaker the way he should have been so many, many years ago, to ensure that his legacy is celebrated for years to come, to help right past wrongs,” Trudeau said.

“As Poundmaker’s people, the hardships you have overcome reflect his courage, his belief, and his vision that you would go on to be a strong and vibrant people. You have always known that your chief deserved to be respected and celebrated, but now all Canadians will have the opportunity to learn and understand the true history and legacy of Chief Poundmaker.”

In addition to Poundmaker’s imprisonment, the federal government took away the community's cows, horses and weapons. Many people starved. The community wasn't allowed to have another chief until 1919.

Going beyond words, Trudeau accepted the hand offered to him by current Poundmaker Chief Duane Antoine. It was a re-enactment and a correction of an incident in 1885, when Poundmaker offered his hand in peace to a representative of the Crown, who refused his overture.

Former Chief Blaine Favel, who was instrumental in driving the process that led to the day’s events, acknowledged those who had passed away and never got to witness Poundmaker being recognized for the humanitarian, diplomat, and peacemaker he was.

“This moves our community forward toward reconciliation and I think it makes the history of Canada that much more rich because Chief Poundmaker was a great man,” said Favel.

While Trudeau was applauded for apologizing and exonerating Poundmaker, as well as for the work his government has done for Indigenous people, he was also reminded that there was still more that needed to be done, including the full implementation of treaties.

Both Assembly of First Nations National Chief Perry Bellegarde and Tsuut’ina First Nation Chief Lee Crowchild talked about the need for truth-telling before reconciliation can happen.

Bellegarde pointed out that more truth-telling was needed in order to exonerate eight leaders who were hanged publicly in Battleford in 1885, six held accountable for the Frog Lake Massacre and two others for the looting of Battleford.

Last November, Trudeau apologized to the Tsilhqot'in community for the hanging of six chiefs more than 150 years ago and delivered a statement of exoneration in the House of Commons.

“We all know the path ahead of us is long and hard. The Prime Minister and his government, they’ve worked hard to try to mend some of the fences. They haven’t got it all right yet though.  There’s still a big fight because we haven’t talked about the truth yet, but we’re jumping toward reconciliation… we cannot lose sight of that,” said Crowchild.

Pauline Favel, who spoke on behalf of Chief Poundmaker’s descendants called the day one of “truth and reconciliation.”

“This is another step when you’re healing,” she said, pointing out that Poundmaker’s descendants were spread right across Canada.